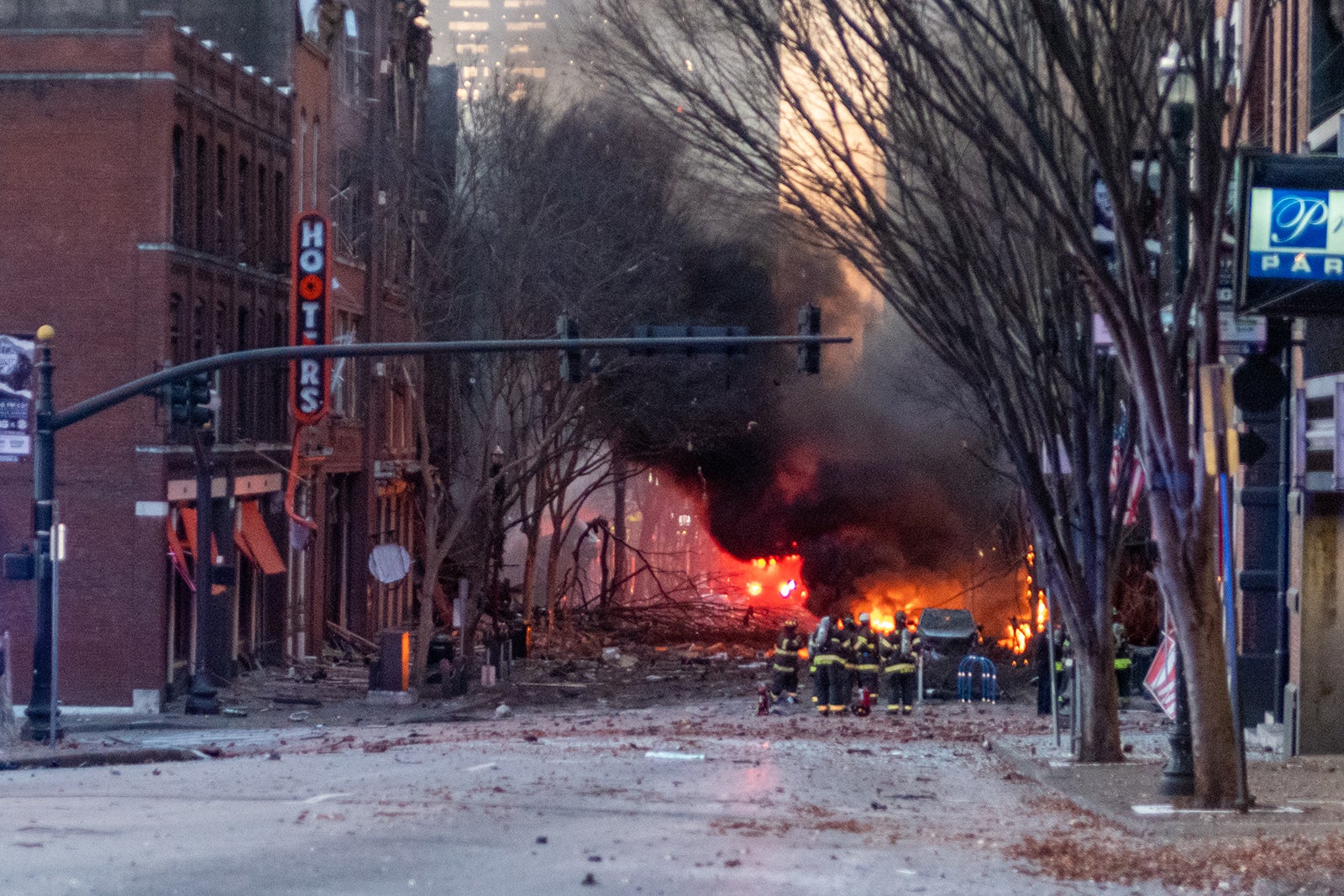 (CNN) — Just after the Christmas morning bombing in downtown Nashville, a terrified woman told a 911 dispatcher she thought the roof of the building where she lives on 2nd Avenue North was collapsing — but she didn’t know quite what was happening, or why.

She scrambled for her shoes and keys and hustled her dog downstairs and toward an exit. Once outside, it all came together.

Elsewhere, a man relayed what he saw through a window of his 15th-floor apartment.

“There was just a massive f**king explosion downtown, like a huge fireball,” the man said in a 911 call. “Just shook all the windows.”

Their voices are part of several 911 recordings that the Metro Nashville Police Department released Wednesday. The calls deal with the minutes before and after a parked recreational vehicle exploded last week on 2nd Avenue North, right outside an AT&T transmission building.

Police said the RV’s owner, Anthony Quinn Warner, set off the explosion, damaging more than 40 buildings and injuring at least eight people. Warner died; his remains were found at the scene. Police said they are trying to determine a motive.

The 911 calls reveal panic and confusion over several events that morning, including reports of gunshots that brought police there an hour before the blast, and a loud computerized female voice coming from the RV, warning that it would soon explode.

Here is a glimpse at how people in the area processed what was happening.

‘Gunshots inside the building’

The white RV showed up outside the AT&T building at 1:22 a.m. CT on Friday, police said.

In one call before 5:30 a.m., a man told a dispatcher, in hushed tones, that he thought gunfire was coming from somewhere inside his four-story apartment building on 2nd Avenue North

“There have been three rounds of gunshots inside the building,” he said, urgently but trying to keep his voice down. “First, about seven or eight minutes ago, and then again about five minutes ago.”

He said he would have no desire to meet police outside, because he was convinced danger was right there.

“They’re in the building,” he nearly whispered, referring either to the gunshots or whoever fired them.

Police responded to the street around 5:30 a.m. — about an hour before the RV would explode.

So far, police have said they’ve found no evidence confirming gunshots were fired.

‘Gunshots on the street’

Still, a woman, calling 911 a few minutes after the first caller, and a few buildings down from him, told a dispatcher that she’d been hearing “gunshots on the street.”

“We’ve heard it happen three times now, and each time, it sounds like it’s six or seven shots,” the second caller said. The series of shots were separated by 20 or 30 minutes, she said.

“We haven’t raised our shades, because we’re trying not to draw any attention to our windows,” the woman said, before the dispatcher assured her police were responding.

Eventually, the RV began broadcasting a computerized, female voice warning that an explosion would take place in 15 minutes. The RV also broadcast Petula Clark’s 1964 hit “Downtown,” a song about how the bustle of downtown can cure a lonely person’s troubles.

Around this time, another 2nd Avenue North resident called 911 about the computerized voice — having heard it, but not understanding who was delivering the message.

“We have a recording out here saying there’s a limited time to evacuate this area . … Is that you guys? Is that law enforcement?” the woman asked a 911 dispatcher.

The voice said something else, she relayed: “There’s a large bomb inside this vehicle.”

“I’m sorry, I’m in a panic,” she said, after asking for police to check it out.

The dispatcher said she didn’t know anything about the voice yet, but she assured the caller that police were already there. The caller thanked the dispatcher, wished her a Merry Christmas, and ended the call.

Some time later, the countdown ran out and the message changed.

“If you can hear this message, evacuate now,” the voice repeatedly said at about 6:30 a.m. CT.

The RV then exploded.

‘Oh, we are getting a bunch of calls on it’

A few blocks south of the explosion, a man saying he was a security guard at the Schermerhorn Symphony Center told a 911 dispatcher he saw remnants of an explosion rise above a building near the AT&T transmission building.

“There was a big, fiery explosion on top of the building,” he said. “It scared the crap out of me.”

Meanwhile, the dispatcher talking to the man who was looking out of his 15th-story window was processing what he was telling her.

“Oh, we are getting a bunch of calls on it,” she said, apparently after looking up his address.

The man said the view was terrifying. ‘It looks like (inaudible) is on fire, still.”

The woman who said her roof was collapsing got outside, scanned the rest of the destruction and assured others that police knew.

“911 is coming already!” she yelled out during her own call.