A month after the holidays, some people are still getting Christmas packages in the mail 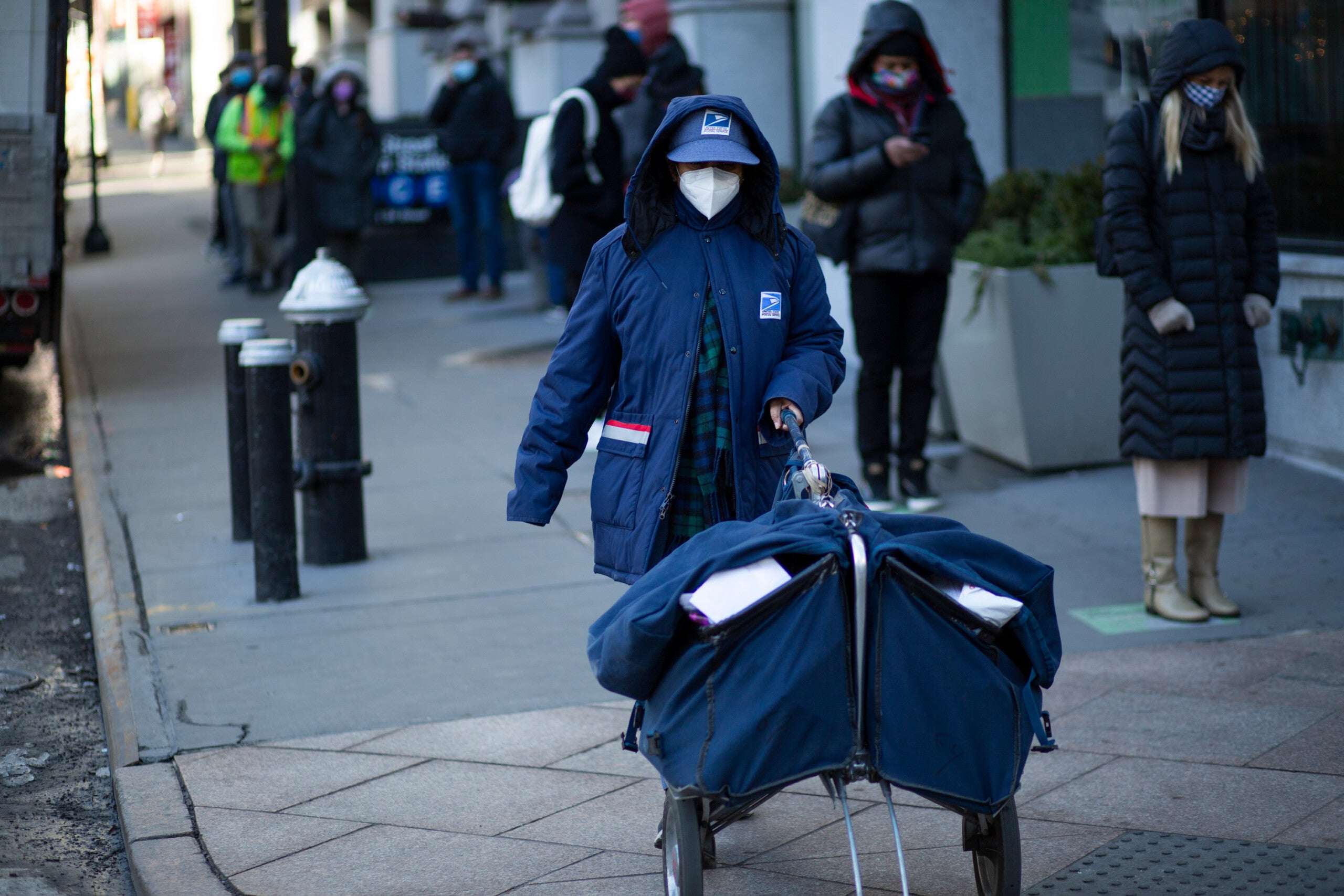 A US Post Service worker pushes a cart with deliveries through the streets of midtown New York on December 23, 2020. - The USPS indicated that they were currently experiencing unprecedented volume increases and limited employee availability due to the impacts of COVID-19" which might lead to temporary delays of mail delivery. (Photo by Kena Betancur / AFP) (Photo by KENA BETANCUR/AFP via Getty Images)
by: By Leah Asmelash, CNN
Posted: Jan 28, 2021 / 07:19 PM EST / Updated: Jan 28, 2021 / 07:19 PM EST

(CNN) — It’s nearly February, and holiday packages and cards are still making their way to peoples’ doorsteps. The reason for all these delays? Like so much right now, the pandemic is partially to blame.

Americans took to online holiday shopping in record numbers, which inundated the system with what the USPS says is a “historic volume” of mail and packages. As a result, parcels, cards and other pieces of mail are sometimes taking more than a month to reach its destination. The USPS has so far delivered more than 1.1 billion packages mailed during the holiday season, a record number, it told CNN.

But at the same time, the Postal Service is facing other issues. More than 39,000 employees out of 644,000 have tested positive for Covid-19, a spokesperson for USPS told CNN, representing about 6% of its workforce.

ShipMatrix, a shipping operations software company, found that hundreds of thousands of parcels experienced delays of at least several days, with some taking even longer.

Customers in states like Pennsylvania, Maryland, New Jersey and New York also experienced some of the largest delays,due to heavy snow storms in December, ShipMatrix reported.

“Throughout the peak season, the Postal Service, along with the broader shipping sector, faced pressure on service performance across categories as it managed through a record of volume while also overcoming employee shortages due to the ongoing surge in COVID-19 cases, winter storms in the Northeast, as well as ongoing capacity challenges with airlifts and trucking for moving historic volumes of mail,” the USPS said in a statement to CNN.

Facilities are still working through backlogs

There were so many incoming packages that the postal workers couldn’t process them in time, Casselli said.

One month later, the processing continues, and residents in cities around the country have been commiserating about waiting for late holiday mail to arrive.

Kim Deyo in Pine Grove, Pennsylvania, told CNN affiliate that WNEP she mailed a package to her mother in another part of Pennsylvania on December 14. It was supposed to arrive later that week, but instead, it went on a joyride: from Jacksonville, Florida, to Tallahassee, and back up to Pennsylvania.

Ten days later, by the time Christmas rolled around, the package still hadn’t arrived. Ultimately, it arrived after the holiday, Deyo said.

In Tulsa, Oklahoma, James Seaman told CNN affiliate KJRH this week that he was still receiving holiday cards from Christmas that were originally mailed out a month ago.

“You can’t rely on getting things through the mail right now in a timely manner,” Seaman told KJRH.

And it’s not just gifts or cards. Bills are being affected, too.

“I’m never late for my bills, they’re going to make my bills late,” he said.

And that’s despite the fact that the Philadelphia processing plant hired more than 280 employees for the holiday season, USPS spokesperson Naddia Dhalai told WPVI.

“Record high volumes of e-commerce orders, COVID 19 closures and weather events may cause delivery delays,” FedEx’s website warns. In March 2020, at the beginning of the pandemic, UPS indefinitely suspended its Service Guarantee, which provides money-back guarantees on some shipping times, “in light of overall coronavirus uncertainties.”

Things will — eventually — go back to normal. As the USPS makes its way through the massive holiday inventory, the service “fully anticipates improvements in performance,” the USPS said in its statement to CNN.