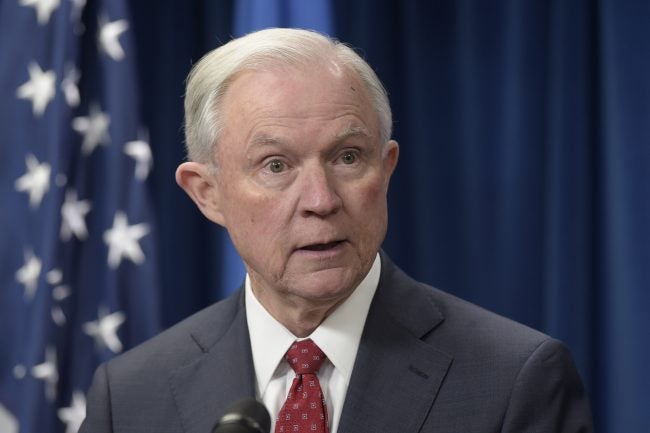 The complaint was filed Thursday with the Alabama State Bar Disciplinary Commission.

The complaint claims Sessions violated the Alabama Rules of Professional Conduct during his confirmation hearings before the U.S. Senate in January, pointing to a response to a question posed by Sen. Al Franken (D-Minn.).

Franken asked Sessions whether “anyone affiliated with the (Donald) Trump campaign had communicated with the Russian government.”

Sessions, an early supporter of Trump’s, served as a policy advisor for his presidential campaign.

In response to Franken’s question, Sessions replied, “I have been called a surrogate at a time or two in that campaign, and I did not have communications with the Russians.”

On March 1, more than a month after the hearing, The Washington Post published reports that Sessions met twice last year with Russia’s Ambassador to the United States, Sergey Kislyak.

Sessions later confirmed that the meetings took place, but denied discussing the campaign with Kislyak.

The complaint filed Thursday alleges that the Post report clearly contradicts Sessions’ verbal testimony, as well as written testimony in response to a question from Sen. Pat Leahy: “Have you been in contact with anyone connected to any part of the Russian government about the 2016 election, either before or after election day?”

Sessions reply was one word long: “No.”

The complaint asks the Bar to investigate the issue and take disciplinary action against Sessions, accordingly.

In a statement earlier this month, the ACLU wrote:

“Jeff Sessions took an oath before the Senate Judiciary Committee to tell the truth, the whole truth, and nothing but the truth, and it is now clear that he broke that oath in his confirmation hearing. If senators of both parties allow an attorney general nominee to plainly lie under oath with no repercussions, they will render our government’s cabinet confirmation process no more than kabuki theater. This matter must not and cannot be seen as a partisan issue, as it goes to the heart of the credibility of our democracy. The American people deserve a full investigation into whether Sessions perjured himself and if he is indeed fit to serve as our nation’s highest law enforcement official. No one is above the law – certainly not those sworn to uphold it.”