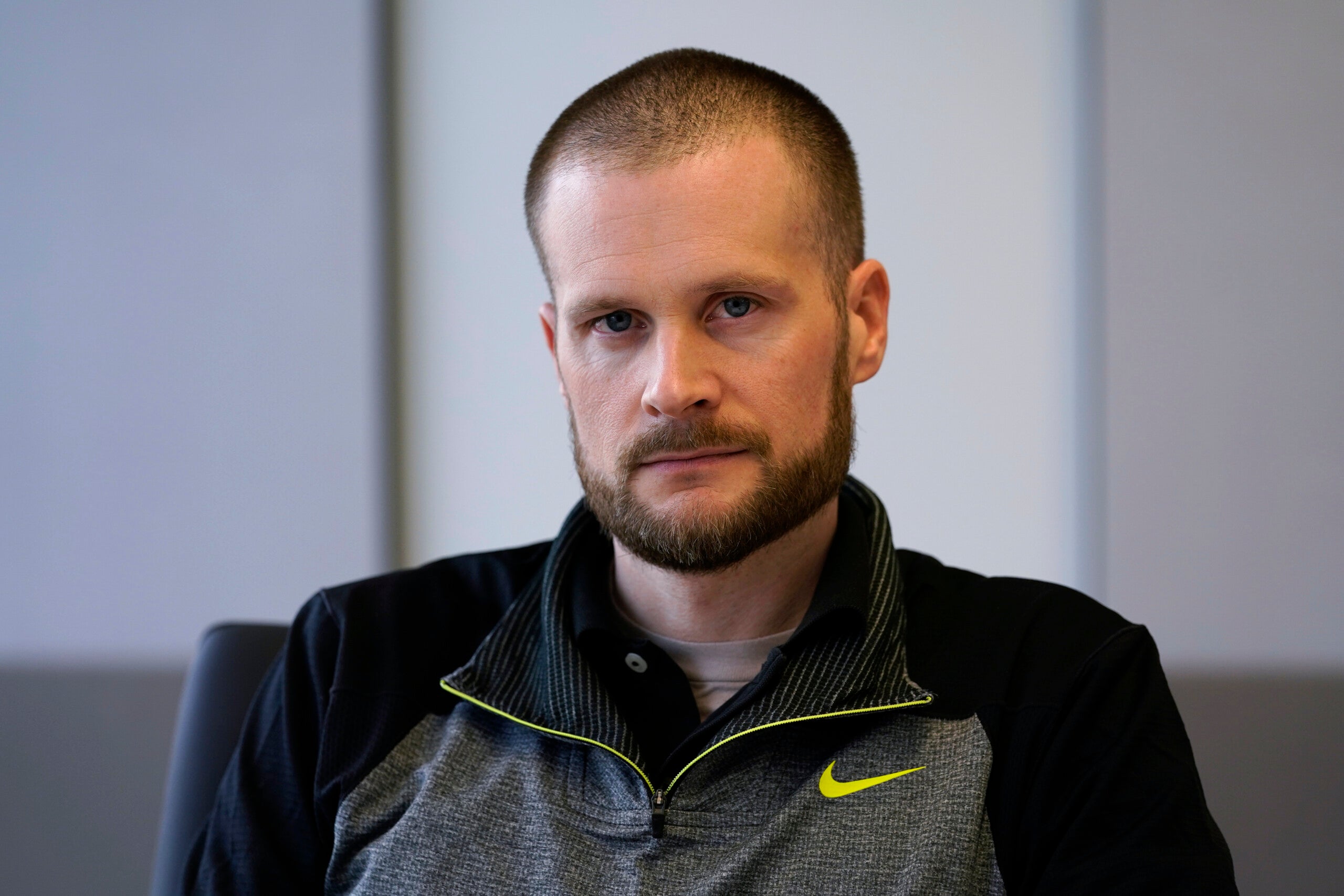 In this Dec. 31, 2020, file photo pardoned Blackwater contractor Evan Liberty poses for a photo in Washington. Liberty is one of four former Blackwater contractors pardoned by President Donald Trump in one of his final acts in office, wiping away their convictions in a 2007 shooting rampage in Baghdad that killed more than a dozen Iraqi civilians. The pardons were met with intense condemnation both in the United States and the Middle East. (AP Photo/Susan Walsh)
by: ERIC TUCKER Associated Press
Posted: Jan 2, 2021 / 09:15 AM EST / Updated: Jan 2, 2021 / 09:15 AM EST

WASHINGTON (AP) — Evan Liberty was reading in the top bunk of his cell one evening late last month when a prison supervisor delivered news he had hoped for.

Liberty is one of four former Blackwater contractors pardoned by President Donald Trump in one of Trump’s final acts in office, wiping away their convictions in a 2007 shooting rampage in Baghdad that killed more than a dozen Iraqi civilians. Even for a president who has repeatedly exercised his pardon power on personal associates and political supporters, Trump’s clemency for the contractors was met with especially intense condemnation, both in the United States and the Middle East.

Historically, presidential pardons have been reserved for nonviolent crimes, not manslaughter or murder, and the traditional process led by the Justice Department values acceptance of responsibility and remorse from those convicted of crimes. The Blackwater contractors meet none of those criteria. They were convicted in the killings of unarmed Iraqi women and children and have long been defiant in their assertions of innocence.

In an interview with The Associated Press, his first since being released from prison, Liberty again expressed little remorse for actions he says were defensible given the context.

“I feel like I acted correctly,” he said of his conduct in 2007. “I regret any innocent loss of life, but I’m just confident in how I acted and I can basically feel peace with that.”

The Blackwater rampage marked one of the darkest chapters of the Iraq war, staining the U.S. government reputation and prompting an international outcry about the role of contractors in military zones. The guards have long maintained they were targeted by insurgent gunfire at the traffic circle where the shooting occurred. Prosecutors argued there was no evidence to support that claim, noting that many victims were shot while in their cars or while taking shelter or trying to flee.

After a monthslong trial in 2014, a jury convicted the men in the deaths of 14 civilians and of injuring even more. A judge called the shootings an “overall wild thing” that cannot be condoned.

Liberty said he understands many may view him undeserving of clemency but attributes it to what he insists is a misguided narrative of the shooting. In the interview, he maintained that he did not shoot in the direction of any of the victims. “I didn’t shoot at anybody that wasn’t shooting at me,” he said.

He said he and the others would “never take an innocent life. We responded to a threat accordingly.”

Liberty, whose 30-year sentence was cut by roughly half last year, isn’t certain how he came to be pardoned and said he has not spoken with Trump. But the group does have supporters, some with ties to the White House. The Blackwater firm, whose name has since changed, was founded by former Navy SEAL Erik Prince, a Trump ally whose sister, Betsy DeVos, is education secretary. Their cause also was championed by Fox News personality Pete Hegseth, an Army veteran.

Trump’s approach to pardons have been heavily influenced by personal appeals from allies. Throughout his presidency, including in his most recent round of pardons, he’s cleared the convictions of his political backers, including former campaign chairman Paul Manafort and a pair of Republican congressmen who were early supporters of his 2016 campaign. Trump has also shown a willingness to intervene on behalf of service members accused of war crimes.

In announcing the Blackwater pardons, the White House cited the men’s military service, the support they received and the tangled history of a case that zigzagged for years in Washington’s federal court, turning on radically different interpretations of the shooting.

Criticism was swift. A Washington Post editorial called the pardons a “unique threat to national security” and suggested the guards had committed “astonishing acts of inhumanity.” Iraqi citizens described old wounds being reopened. Soon after the announcement, a photograph of a 9-year-old victim in a blue-patterned shirt smiling faintly circulated widely online. The boy’s father told the BBC that Trump “broke my life again.”

Blackwater guards, who as State Department contractors were responsible for providing diplomatic security, were already seen as operating with impunity in Iraq. The rampage further escalated international scrutiny of them, prompted multiple investigations and strained U.S.-Iraqi relations.

On Sept. 16, 2007, the guards were summoned to create an evacuation route for a diplomat after a car bomb explosion.

By prosecutors’ account, the shooting began after the guards’ four-vehicle convoy took up positions at Baghdad’s crowded Nisour Square, where the contractors launched an unprovoked attack using sniper fire, machine guns and grenade launchers. Liberty says he shot only in the direction of an Iraqi police post; the guards had been concerned by infiltration by insurgents of police ranks. Prosecutors say he and the others fired indiscriminately.

Defense lawyers say the shooting began only after a white Kia broke from the traffic and moved toward the convoy in ways the guards perceived as a threat and a potential car bomb. In a narrative disputed by prosecutors, the guards say they responded to insurgent gunfire. One contractor who received immunity described hearing the incoming “pop” of what sounded like AK-47 rounds shortly before another guard fired.

The case was bitterly contested for more than a decade, with the Justice Department reviving the prosecution after an original indictment was thrown out because of government missteps and flying in dozens of Iraqi witnesses to testify. Liberty and two others, Paul Slough and Dustin Heard, were convicted of manslaughter. Another, Nicholas Slatten, was convicted of first-degree murder.

A fifth guard, Jeremy Ridgeway, pleaded guilty and testified against the others, admitting firing multiple rounds into the Kia — which actually contained a medical student and his mother — but denied that he saw Iraqis pointing guns or that he felt threatened. Defense lawyers sought to undercut his credibility by noting that he’d previously told a different story.

The lawyers challenged the verdict, citing in part newly discovered evidence — an Iraqi witness statement — they said contradicted what the jury was told.

Slatten’s murder conviction was overturned but he was retried and convicted. The 30-year sentences for the others were shortened after a federal appeals court said the punishments were excessive even though what happened “defies civilized description.”

After six years behind bars, Liberty had tried to not get his hopes up about a pardon. “Dumbfounded” when the news came, he grabbed a photograph of his grandfather, a list of Spanish vocabulary he’d been studying and a motivational book on discipline, leaving the rest behind.

The New Hampshire native and Marine veteran said he is uncertain of future plans, though he’s passionate about physical fitness and interested in helping veterans’ organizations. He says he’s grateful to his supporters and to Trump for what he calls a “second chance at life.”

“I feel like it’s my duty to go out and do something positive and live a good life because they gave me a second chance, so that’s basically my goal.”