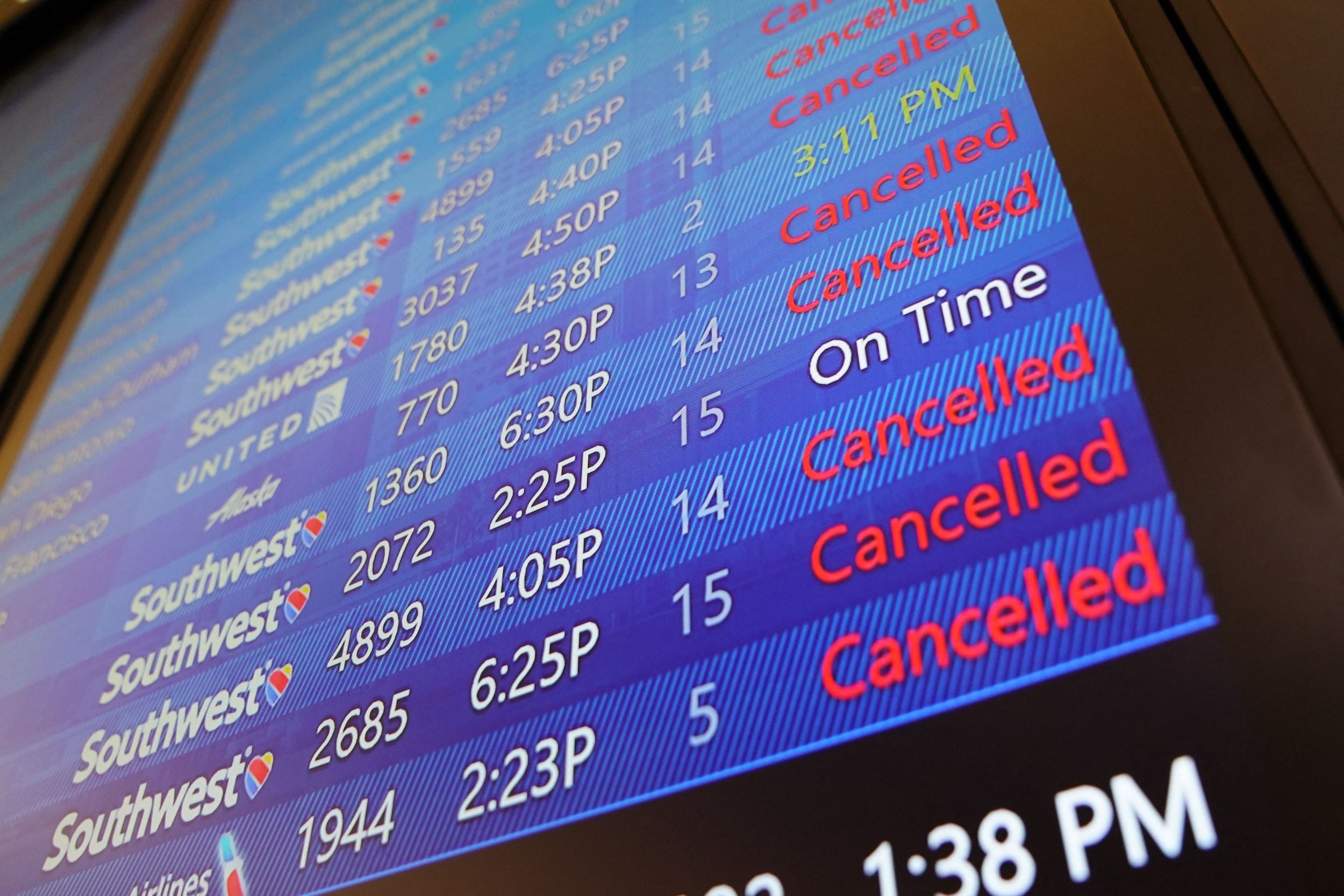 The arrival and departures board lists numerous flight cancelations at Tampa International Airport before the airport is due to close at 5pm today ahead of Hurricane Ian on September 27, 2022 in Tampa, Florida. - The US National Hurricane Center (NHC) said Ian made landfall just southwest of the town of La Coloma, Cuba, at about 4:30 am local time (0830 GMT). The hurricane was packing maximum sustained winds of 125 miles (205 kilometers) per hour, the NHC said, making it a Category 3 storm on the Saffir-Simpson scale. (Photo by Bryan R. Smith / AFP) (Photo by BRYAN R. SMITH/AFP via Getty Images)
by: Pete Muntean, Gregory Wallace and Marnie Hunter, CNN
Posted: Sep 29, 2022 / 11:32 AM EST / Updated: Sep 29, 2022 / 04:00 PM EST

(CNN) — Tropical Storm Ian threatens another blow to air travel as it moves up the East Coast and away from the Florida panhandle, where airports are assessing conditions and determining when service can safely resume.

“Tropical storm Ian is moving off of Florida into the Atlantic and is expected to turn northwest and make landfall again in the Carolinas tomorrow [Friday],” the Federal Aviation Administration said in a statement, saying passengers should check on the status of their flights with the airlines.

In Florida, a number of airports remained closed on Thursday with hundreds of flight cancellations in the wake of the storm.

All flights are canceled Thursday at Jacksonville International Airport. “The airport will reopen as soon as the airfield and terminal are deemed safe for flight ops,” the airport said on Twitter Thursday morning.

Melbourne Orlando International Airport — one of the smaller commercial airports in Florida with service from Allegiant, American and Delta — said it plans to reopen at 6 a.m. ET Friday.

CEO Joe Lopano said in a statement that Tampa International is “very lucky to have come out on the other side of this largely unscathed.”

“While we won’t look as pretty as we used to because the ceiling’s all gone, we’ll be functional,” he said.

The airports below remain closed, according to information from the Federal Aviation Administration’s airport status map.

While some airports have not announced reopening plans, the FAA map gave the following estimated reopening times as of 2:30 p.m. ET Thursday:

Orlando Sanford International Airport is also closed through at least Thursday, according to the airport’s website

Travelers are advised to check airport websites and social media postings as well as with their airlines for specific information and to confirm timing.

The following international airports in Florida are open but some flights could be delayed and canceled:

As for smaller airports, hard-hit Punta Gorda is closed through at least Thursday.

CEO James Parish said Punta Gorda Airport experienced “extensive” damage to hangars at the airport and does not have power in the passenger terminal. Once power is restored, Parish said the airport will make plans to restore service from Allegiant Air.

Gainesville Regional is expected to reopen at 8 a.m. Friday.

More than 2,000 Thursday flights in the United States had been canceled by 2:30 p.m. ET, according to data from flight tracking site FlightAware. More than 2,100 US flights were canceled on Wednesday.

The airports in Orlando and Tampa were leading with the most cancellations Thursday afternoon.

More than 1,200 flights scheduled for Friday had also been canceled by Thursday afternoon.

American Airlines — which canceled more than 600 flights on Wednesday and another 348 on Thursday– says operations at its fourth-largest hub in Miami are recovering.

American customers traveling through airports in Florida, Georgia and the Carolinas can rebook flights without change fees.

Other US carriers, including Delta, Southwest and United, have also introduced flexible policies for impacted passengers.

Southwest, which typically operates a high number of routes to and from Florida airports, canceled more than 525 flights.

United Airlines says it has proactively canceled more than 392 flights to and from Florida airports since Tuesday.