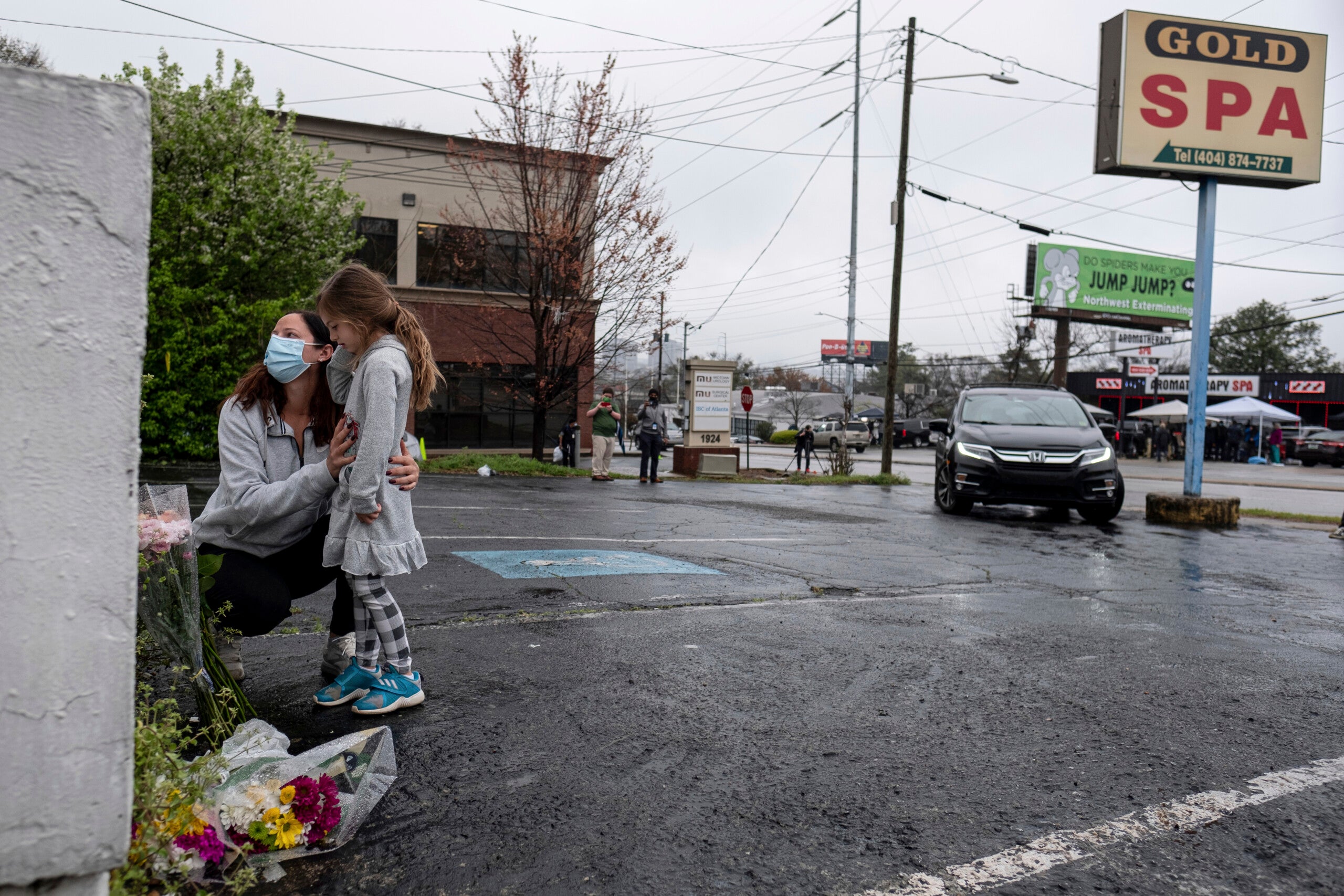 Mallory Rahman and her daughter Zara Rahman, 4, who live nearby, pause after bringing flowers to the Gold Spa massage parlor in Atlanta, Wednesday afternoon, March 17, 2021, the day after eight people were killed at three massage spas in the Atlanta area. Authorities have arrested 21-year-old Robert Aaron Long in the shootings at massage parlors in Atlanta and one in Cherokee County. (AP Photo/Ben Gray)
by: By LUIS ANDRES HENAO, MARIAM FAM and JESSIE WARDARSKI Associated Press
Posted: Mar 19, 2021 / 10:04 AM EST / Updated: Mar 19, 2021 / 10:04 AM EST

Asian American Christian leaders said Thursday their congregations are saddened and outraged after a white gunman killed eight people — most of them women of Asian descent — at three Atlanta-area massage businesses. And they’re calling for action beyond prayers.

Asian Americans were already rattled by a wave of racist attacks amid the spread of the coronavirus pandemic across the United States. While the motive behind Tuesday’s rampage remains under investigation, some see it as a wake-up call to stand up against a rise in violence against the community.

The lead pastor at Korean Central Presbyterian Church in Atlanta, located a few miles from two of the spas that were targeted, said he will ask congregants during his Sunday sermon to “not just pray, not just worry,” because “it’s time for us to act.”

“I’m going to urge people with love and peace that we need to step up and address this issue, so that … our next generation should not be involved in tragic … violence,” the Rev. Byeong Han said. “That’s what Christians need to do.”

South Korea’s Foreign Ministry says diplomats in Atlanta have confirmed with police that four of the dead were women of Korean descent, and are working to determine their nationality.

Jane Yoon, a congregant at Korean Central Presbyterian and a 17-year-old high school junior in nearby Marietta, said she increasingly worries for her family, which is of Korean descent, and was shocked by the killings.

“I was definitely very outraged,” she said. “I was in shock at first of the news and just also how close it is to my community.”

It also hit home on a very personal level: Last week, she said, she was in a car accident and another driver punched her in the face and body before she was able to call 911. Yoon said the woman, who was arrested, did not make any racist comments during the assault, but she couldn’t help but think about rising attacks against Asian Americans.

Following that incident, she has been getting spiritual guidance and counseling from the congregation.

In the Atlanta suburb of Roswell, the Rev. Jong Kim of Grace Korean Presbyterian Church said he found a glimmer of hope in the wake of the killings after a woman reached out to donate $100 to his church “to express her feelings of sorrow to the Asian community.”

Kim spoke to several other Korean pastors in the area Thursday, and they now plan to join the group Asian Americans Advancing Justice, through which they hope to have discussions about issues of race and ethnicity and provide funeral service assistance for the victims’ families.

The Atlanta chapter of Asian Americans Advancing Justice has said that while details of the shooting are still emerging, “the broader context cannot be ignored.” The attacks, it said, “happened under the trauma of increasing violence against Asian Americans nationwide, fueled by white supremacy and systemic racism.”

Ripples from the killings have been felt well beyond Atlanta.

In Chicago, Garden City Covenant Church invited Asian Americans “in need of a community who understands your pain” to join an online meeting in which they could “share, listen, lament and pray” together.

“It’s an important Biblical practice, and Christian practice, to come before God honestly and to pour one’s own heart out before God,” he said. “God can handle even the rage and the devastation that comes out of us at times.”

Catanus said he was glad to see that people are now “more awakened” to the experiences of Asian Americans. But he said much works remains to be done in faith communities and called on religious leaders to denounce anti-Asian racism from their pulpits.

“In the Christian community and in our Christian institutions, specifically, we need to confess that we have in many ways failed to lead and to teach our people,” he said. “Our discipleship has failed in many ways to address these very powerful forces that have led to violence and death.”

Kevin Park, an associate pastor at Korean Central Presbyterian Church, said not only Asian Americans but the whole country needs to speak out against the violence, racism and “more subtle marginalization” that have been suffered for generations.

“And I think there needs to be kind of this movement toward solidarity. … We’re all in this together.”