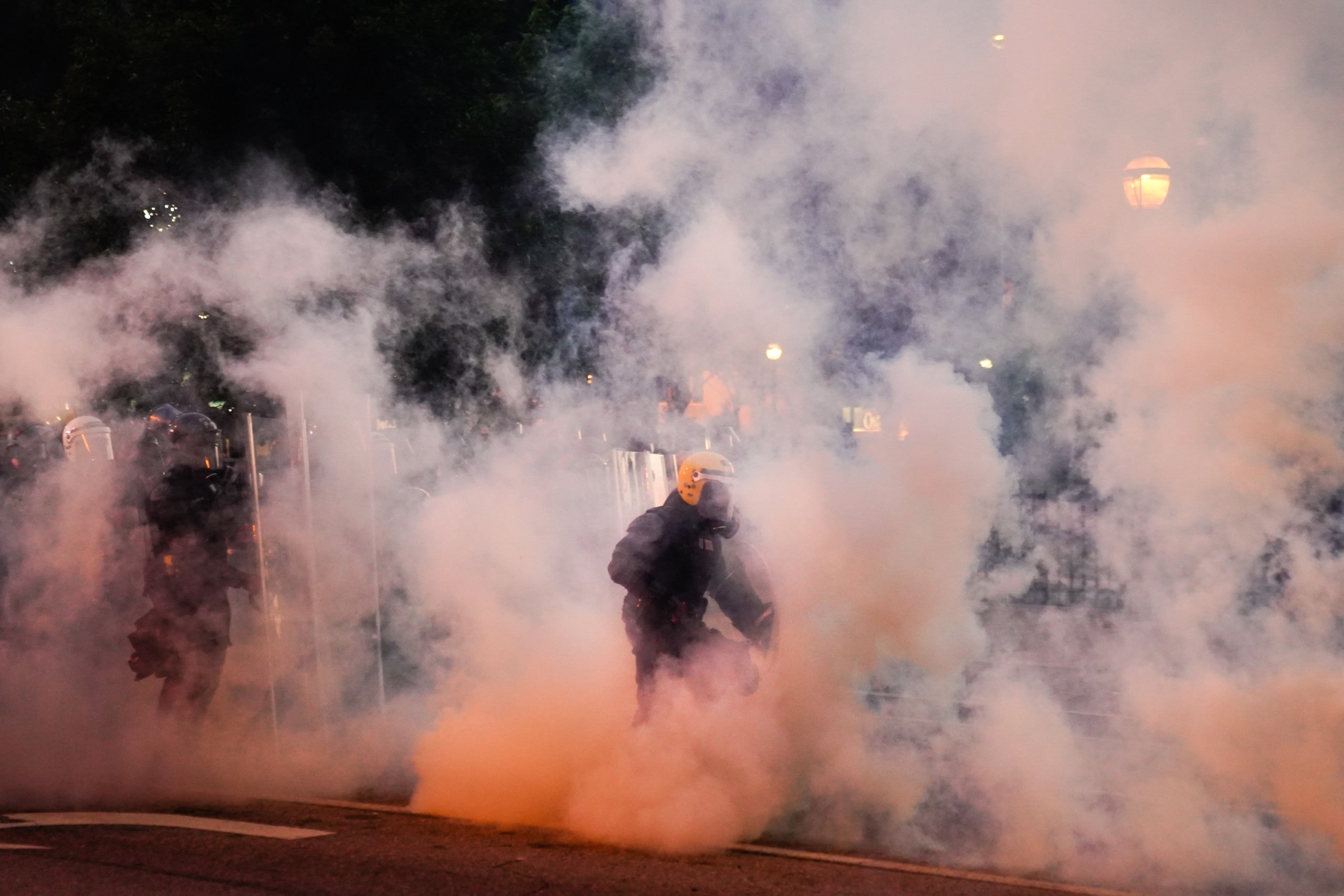 ATLANTA, GA - MAY 30: Police advance through a cloud of tear gas during a protest in response to the police killing of George Floyd on May 30, 2020 in Atlanta, Georgia. Across the country, protests have erupted following the recent death of George Floyd while in police custody in Minneapolis, Minnesota in the most recent in a series of deaths of black Americans by the police. (Photo by Elijah Nouvelage/Getty Images)
by: KATE BRUMBACK, Associated Press
Posted: May 31, 2020 / 08:29 PM EST / Updated: May 31, 2020 / 08:29 PM EST

ATLANTA (AP) — Two police officers have been fired and three others placed on desk duty over excessive use of force during a protest arrest incident involving two college students, Atlanta’s mayor said Sunday.

Mayor Keisha Lance Bottoms said at a news conference that she and police Chief Erika Shields made the decision after reviewing body-camera footage of a Saturday night incident that first gained attention from video online and on local news.

The video, shown on TV as captured by local reporters, shows a group of police officers in riot gear and gas masks surround a car being driven by a man with a woman in the passenger seat. The officers pull the woman out and appear to use a stun gun on the man. They use zip-tie handcuffs on the woman on the ground. The couple did not appear to be fighting police.

TV reporters said the police had earlier broken glass on the car and flattened the tires.

She said she’d delayed the news conference several hours to review all the body-camera footage because she and Shields wanted to be certain about what happened.

“I really wanted to believe that the body-worn camera footage would provide some larger view that could better rationalize why we got to this space,” Shields said. “And having spent most of the afternoon with the mayor, reviewing the footage exhaustively, I knew that I had only one option, and that is to terminate the employees.”

Bottoms said she had spoken to leaders at Spelman College and Morehouse College, where she said the the young people were students. She said she’d also spoken to representatives for the students but hadn’t yet spoken directly to them.

Shields offered an apology and said she knows the officers’ behavior was unacceptable and caused further fear.

“Sometimes the best thing, the only thing you can do as a police chief is come in and clean up the mess that’s before you,” Shields said.

“When wrong is wrong, we have to, as law enforcement, start dealing with it in the same manner that we would deal with it with non-law enforcement,” Shields said. “For some reason, we’ve fallen into a gray area where there’s a separate set of rules for law enforcement, and if we want to get out of this space that we’re in now we have to change how we manage internally.”

Shields said she experienced a broad range of emotions as just a few hours before she saw the video, another of her officers was seriously injured. A preliminary investigation indicates the officer was in an intersection on foot to block traffic from passing into an area where there were protesters when a person on an ATV approached at a high rate of speed and hit him.

The officer suffered significant injuries to his legs and remained in the intensive care unit Sunday evening, Shields said, adding that she hopes he’ll be able to walk again. The ATV rider was taken into custody at the scene and to a hospital with non-life-threatening injuries.

Police were investigating the cause of the collision.

Bottoms imposed a 9 p.m. curfew for Saturday and Sunday. Gov. Brian Kemp authorized up to 3,000 National Guard troops to be deployed in cities across the state to respond if needed to protests over the deaths of George Floyd in Minnesota and Ahmaud Arbery in coastal Georgia.

Atlanta police said Sunday they had arrested more than 150 people as protesters threw rocks at officers and broke windows in the downtown area. The curfew was initially imposed after demonstrations Friday night turned violent with people setting fires and smashing windows at businesses and restaurants.