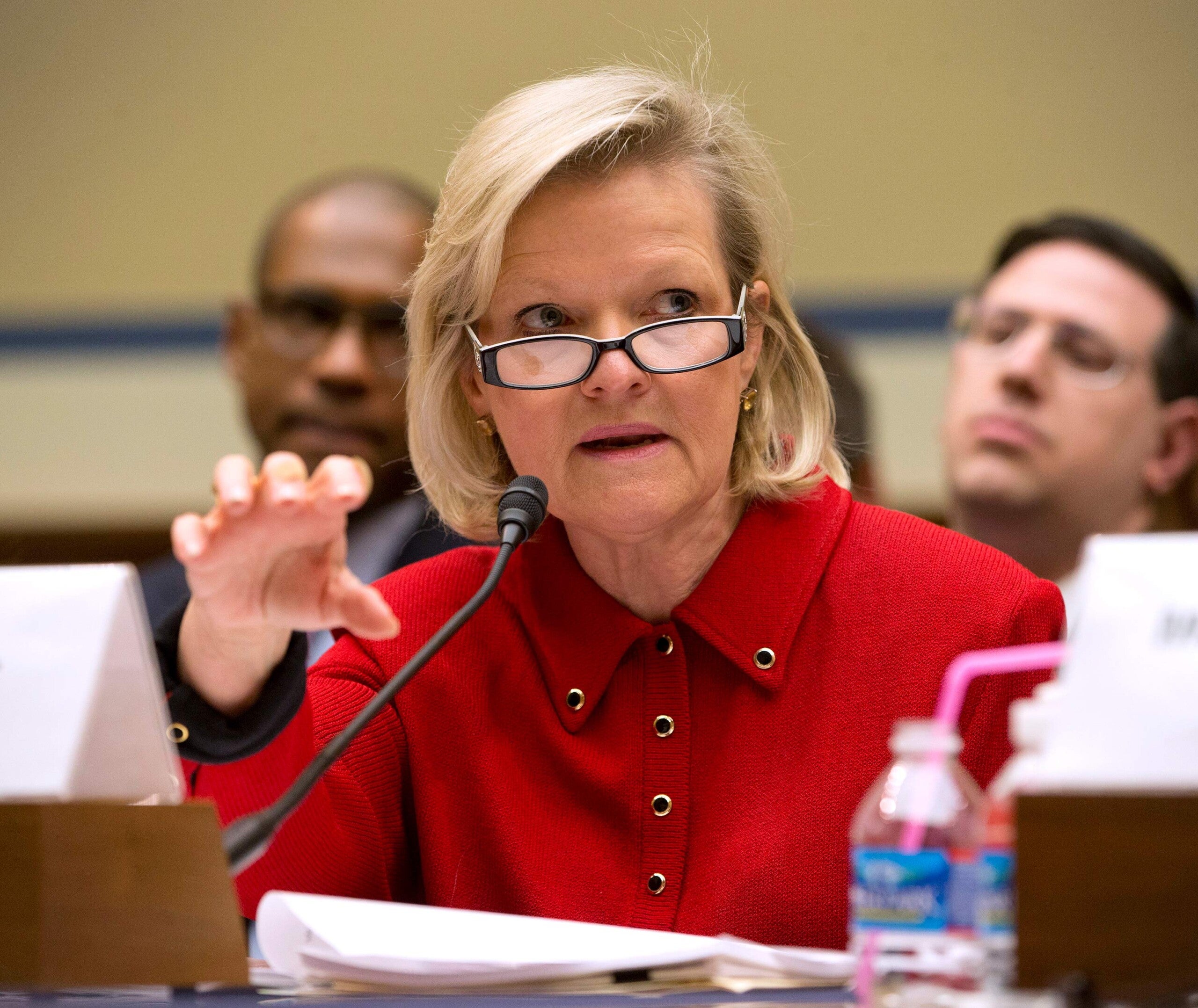 Cleta Mitchell, a lawyer who assisted President Donald Trump on the January 2 call when Trump pressured Georgia officials to "find" him votes, has resigned from her law firm. In this photo, Mitchell is seen testifying on Capitol Hill in 2014. (Provided Photo/Pablo Martinez Monsivais/AP via CNN)
by: Katelyn Polantz and Caroline Kelly, CNN
Posted: Jan 6, 2021 / 05:33 AM EST / Updated: Jan 6, 2021 / 05:33 AM EST

(CNN) — Cleta Mitchell, a lawyer who assisted President Donald Trump on the January 2 call when Trump pressured Georgia officials to “find” him votes, has resigned from her law firm.

National law firm Foley & Lardner previously said it was “concerned” with Mitchell’s involvement in Trump’s call with Georgia Secretary of State Brad Raffensperger, and said the firm wasn’t engaged in any legal work challenging the election results. Tuesday, it announced Mitchell was no longer with the firm.

“Cleta Mitchell has informed firm management of her decision to resign from Foley & Lardner effective immediately. Ms. Mitchell concluded that her departure was in the firm’s best interests, as well as in her own personal best interests,” firm spokesman Dan Farrell said in a statement Tuesday. “We thank her for her contributions to the firm and wish her well.”

Mitchell told her friends and clients on Tuesday in a personal email that she had left her law firm after almost two decades, blaming “a massive pressure campaign in the last several days mounted by leftist groups” against her, the firm and her clients stemming from her affiliation with Trump and his post-election litigation and efforts in Georgia.

“With the ever more brazen attacks on conservatives and, most especially, anyone who supports and wants to help President Trump, I realize that a large national law firm is no longer the right platform for me or my law practice,” she wrote. Mitchell confirmed her email to CNN but declined to comment further.

Mitchell has for many years been one of the right wing’s most prominent voices alleging voting fraud.

On Trump’s call Jan. 2 with Raffensperger, White House chief of staff Mark Meadows identified Mitchell as an attorney having some involvement with Trump’s effort.

She spoke several times on the call about a lawsuit Trump had brought to decertify Georgia’s results, and Trump’s effort to get records from the state. A lawyer for the state told her that the information she had was “not accurate.”

Law firms, which often take pride in representing unpopular positions, rarely react strongly to political discourse. But Trump’s weekend call to the Georgia officials and insistence in trying to change the election’s result has been perceived by the legal community to be extraordinary and, in many instances, ethically and democratically out of bounds.

In excerpts of the stunning one-hour phone call, Trump lambasted his fellow Republican for refusing to falsely say that he had won the election in Georgia and repeatedly touted baseless claims of election fraud.

“The people of Georgia are angry. The people of the country are angry. And there’s nothing wrong with saying that, you know, um, that you’ve recalculated,” Trump said in one part of the call. Raffensperger responded, “Well, Mr. President, the challenge that you have is, the data you have is wrong.”

Mitchell’s involvement took some by surprise. CNN previously reported that several senior officials had been unaware that Mitchell was working with the President until she surfaced on Trump’s call with Raffensperger. Republican sources told CNN late last year that Mitchell, who has been active in Republican causes, including gun rights, was among prominent conservative lawyers that a GOP presidential campaign would turn to for a serious contested election legal fight.

But that effort never materialized, and courts have resoundingly and repeatedly rejected Trump’s post-election lawsuits, including in a federal court in Georgia on Tuesday morning.

In some parts of the January 2 call, Mitchell pushed the Georgia officials to help Trump. She told the state that the President sought its voting-related data and records. “I think what the President is saying, and what we’ve been trying to do is to say, look, the court is not acting on our petition,” she said on the call. “But the people of Georgia and the people of America have a right to know the answers. And you have data and records that we don’t have access to.”

Trump has spent the final weeks of his term largely focused on undermining the election results, spreading unsubstantiated allegations of voter fraud and urging state officials to intervene in his favor. Last month, Trump called Georgia Gov. Brian Kemp, pushing the Republican to convince state legislators to overturn Democrat Joe Biden’s win in the state, a source familiar with the conversation told CNN.

The President spoke on multiple occasions with the speaker of the House in Pennsylvania, a state Biden also won, about the Keystone State’s election results, inquiring about their electoral process, a spokesman for the lawmaker said last month.

In November, Trump invited Republican state lawmakers from Michigan to the White House and called two Republican canvass board members from Wayne County to offer his support after they went back and forth on voting to certify the election results from the state’s largest county, according to a person familiar with the matter.