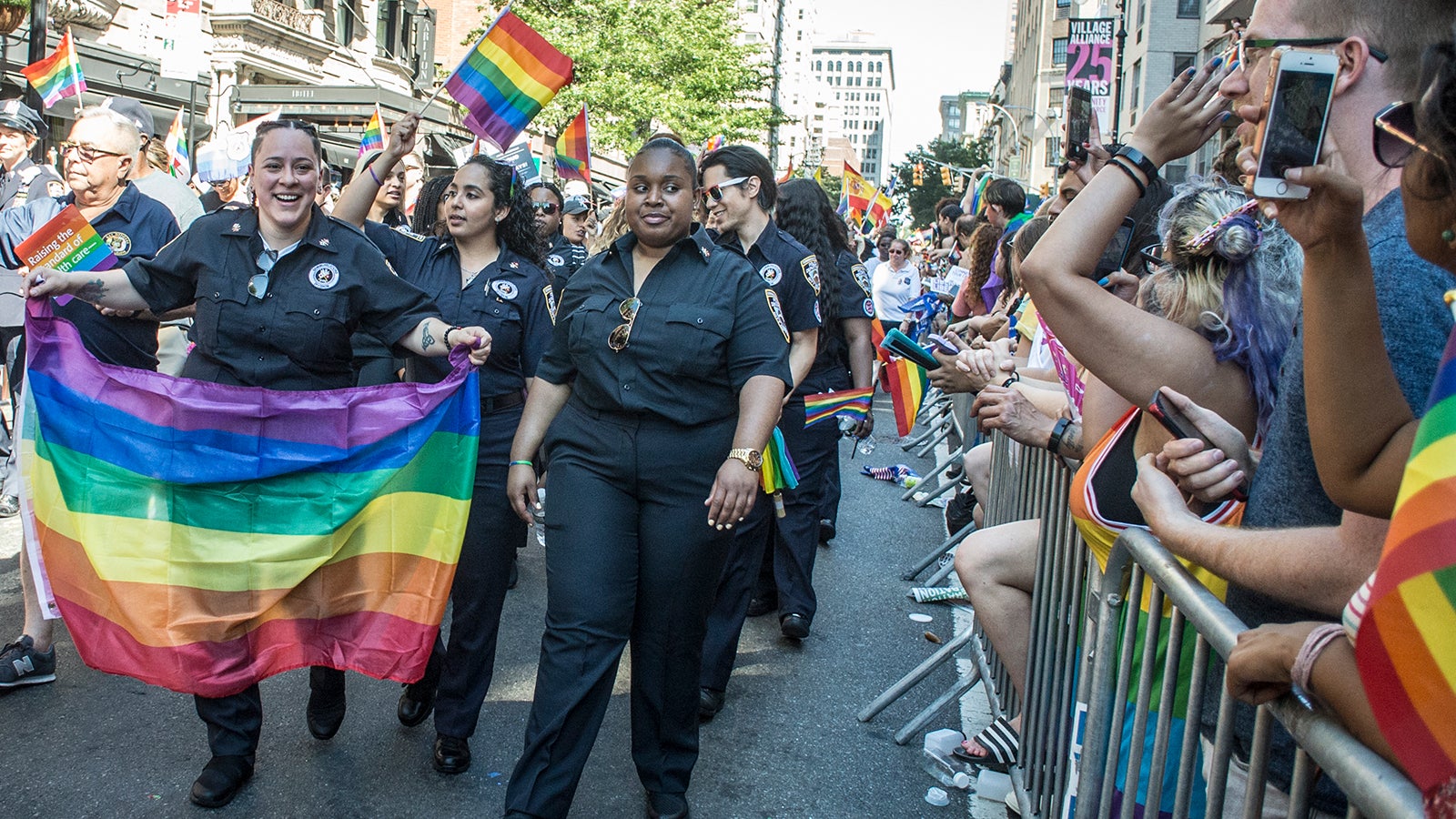 (CNN) — As cities across the country gear up for their annual Pride parades, a trend has emerged: Increasingly, police officers in uniform are no longer allowed.

Last month, both NYC Pride and The Center on Colfax, which organizes Denver Pride, announced they would no longer allow police officers to host exhibitions or participate in the parades while in uniform.

“While we value our relationships with law enforcement and want to continue to build a safer community for all Coloradans, we feel we must take a stand,” The Center on Colfax said in a statement to CNN.

Heritage of Pride, which organizes NYC Pride, echoed those sentiments in its May 15 statement, announcing that corrections and law enforcement exhibitors would be banned until 2025.

“NYC Pride seeks to create safer spaces for the LGBTQIA+ and BIPOC communities at a time when violence against marginalized groups, specifically BIPOC and trans communities, has continued to escalate,” Heritage of Pride said. “The sense of safety that law enforcement is meant to provide can instead be threatening, and at times dangerous, to those in our community who are most often targeted with excessive force and/or without reason. NYC Pride is unwilling to contribute in any way to creating an atmosphere of fear or harm for members of the community.”

Not allowing police officers at Pride isn’t new. In 2017, Pride Toronto banned uniformed police officers and their floats from participating. In 2020, Vancouver Pride Society followed suit, acknowledging it should have done so earlier. But in the US, police bans at Pride have been harder to implement — both Sacramento and St. Louis briefly banned police participation, before walking it back. Minneapolis has similarly flip-flopped.

Other LGBTQ marches not affiliated with Pride, such as the Queer Liberation March in New York and the Dyke March in Washington, DC, have historically not allowed law enforcement officers to participate, standing in opposition to the attitudes of official Pride marches.

In both New York and Denver, law enforcement officers can still attend Pride as individuals not in uniform. Still, police groups in both cities criticized the decisions.

In New York, the Gay Officers Action League said it was “disheartened” by the decision, saying the move was done in an effort to “placate some of the activists” in the city.

“Heritage of Pride is well aware that the city would not allow a large scale event to occur without police presence. So their response to activist pressure is to take the low road by preventing their fellow community members from celebrating their identities and honoring the shared legacy of the Stonewall Riots,” GOAL President Brian E. Downey said in a statement.

Police officers have marched in NYC Pride for more than 25 years, Heritage of Pride confirmed to CNN.

Meanwhile, in Colorado, the Aurora Police Department — which notes it has been marching in the parade since 2013 — also admonished the choice.

“I understand people’s anger, I understand some people just don’t like the police,” said Chief Vanessa Williams, who is gay, in a statement to CNN. “We are more than the uniform we wear; we are a part of this community. I look back at the Stonewall riots where the LGBTQ community stood up to the police for the treatment they were receiving at the time. How powerful it is now to see an officer march in a pride parade holding the hand of their partner, spouse, and significant other saying that was then, this is now. We are here to protect you.”

Pride started as an anti-police protest

Pride marches first began in response to a 1969 police raid on Stonewall Inn, a gay bar in New York City, which sparked multiple days of protests against policing.

Miss Major, a transgender activist who was at the original Stonewall riots, wrote about why she is against police presence at modern prides in her upcoming book, “Miss Major Speaks.”

“At the time, just to be transgender was against the law. Wear a dress — go straight to jail. Or, ‘You’re crazy,’ so we’re going to take you to the mental hospital,” Miss Major writes in an excerpt shared with CNN. “They’ve been beating us the f*** up, and continue to do so. And showing everybody else how to beat us up and kill us. That’s where their loyalty lies.”

The debate came to a head notably in 2017, when 12 people were arrested outside Stonewall while protesting corporate sponsorship and police presence at Pride.

That same year, four people in Columbus, Ohio, were arrested while blocking the path of the parade, in what they said was an effort to hold a moment of silence protesting the death of Philando Castile and violence against transgender women of color. Now known as the Black Pride 4, Stonewall Columbus issued an apology to the greater LGBTQ community group in 2019 “for not being the voice of our community when we needed to be.”

“Literally you’re having a protest against police violence at which police are committing violence,” said Andrea Ritchie, a lawyer and author of “Invisible No More: Police Violence against Black Women and Women of Color.”

She is among those arguing that police at Pride celebrations aren’t really protecting anyone, even when officers identify as LGBTQ.

Ritchie was on-call legal support at NYC Pride for 10 years, and she said she’s witnessed police violence — such as arrests, macing or beatings — at Pride every single year.

When asked to comment on allegations of misconduct, the NYPD told CNN, “Our annual work to ensure a safe, enjoyable Pride season has been increasingly embraced by its participants. The idea of officers being excluded is disheartening and runs counter to our shared values of inclusion. That said, we’ll still be there to ensure traffic safety and good order during this huge, complex event.”

Those on the other side of the debate claim that Pride organizers are imposing the same discriminatory practices that have been used against those in the LGBTQ community.

“If you’ve been to a pride parade, you know it’s a celebration of acceptance and inclusion,” wrote Jonathan Capehart, a journalist, in May. “That’s why it’s beyond troubling that a community made up of so many who’ve been rejected by their families because of who they are is now turning on its members because of what they do for a living.”

“No one is shoving anyone back in the closet,” Ritchie said. “But to march wearing symbols of an oppressive regime that continues to oppress queer and (transgender) people across the country is not liberation.”

The LGBTQ experience inside the legal system

For many people, police officers — even if they identify as LGBTQ — still represent the legal system, said Hugh Ryan, historian and author of “When Brooklyn was Queer.” Even if the officers are individually trying to do good, the system is still “incredibly homophobic and transphobic,” he said.

According to the Williams Institute, a research center at UCLA School of Law dedicated to sexual orientation and gender identity law and public policy, data shows that members of the LGBTQ community have been subjected to increased profiling, harassment and even violence from law enforcement compared to non-LGBTQ people.

A 2017 study from the Institute, which was published in the American Journal of Public Health, found that sexual minorities — those who identified as lesbian, gay or bisexual, or had same-sex experiences — were disproportionately incarcerated, constituting 9.3% of men in prison, 6.2% of men in jail, 42.1% of women in prison, and 35.7% of women in jail.

The rate of incarceration of lesbian, gay and bisexual people is approximately three times higher than the general US incarceration rate, the study found, and incarcerated sexual minorities were more likely to experience mistreatment, harsh punishment and sexual victimization than straight inmates.

“The system is still a problem,” Ryan said.