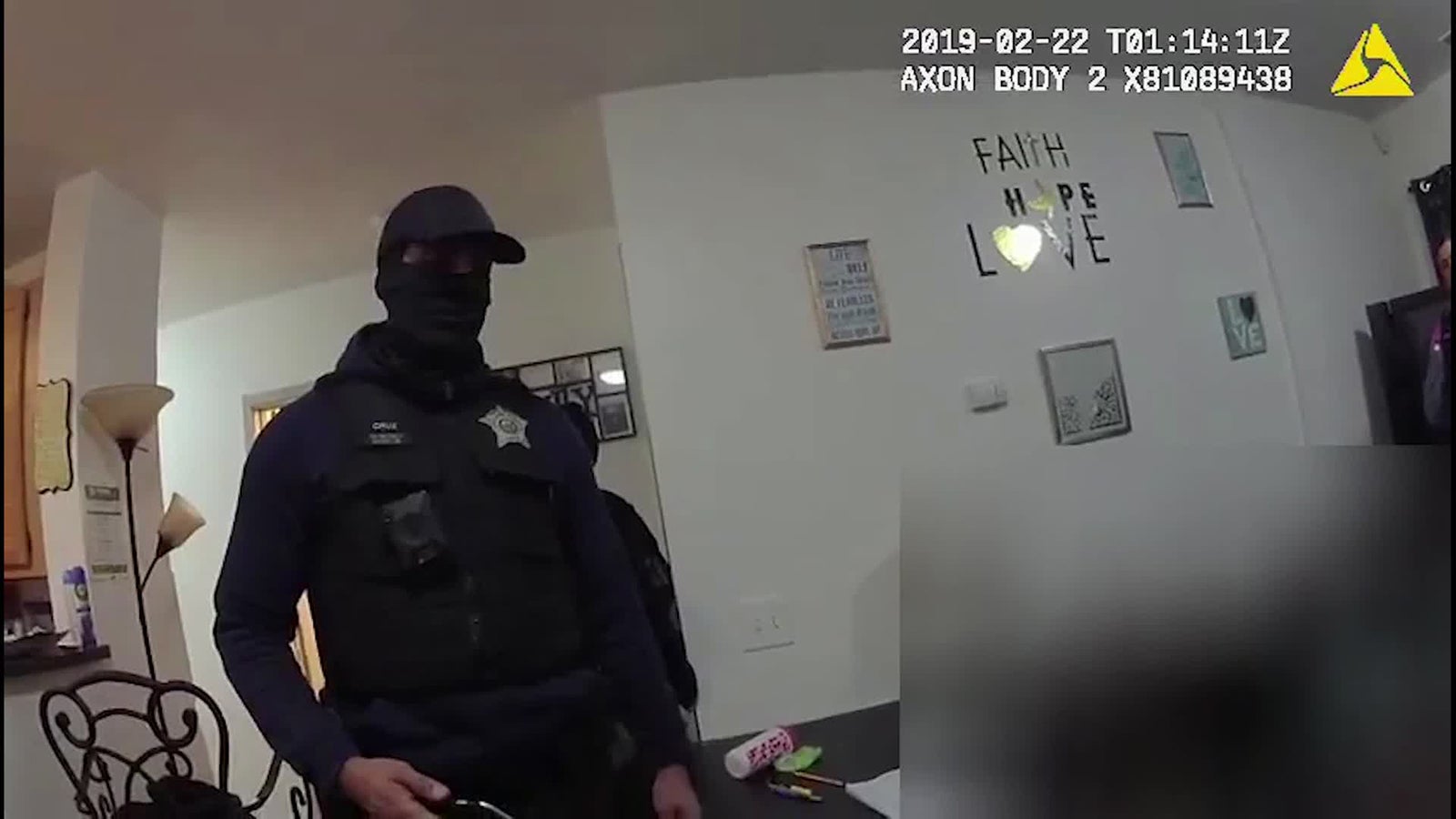 (CNN) — Dogged by increased scrutiny over the Chicago Police Department’s mistaken raid on the home of a social worker in 2019, Mayor Lori Lightfoot released body camera footage from the officers involved in the encounter and announced that she has reached out to the woman to set up a face-to-face meeting.

The 20 videos from officers involved in the raid show officers sweeping through the home of Anjanette Young, guns drawn expecting to find a felon with a gun while she stands naked and distraught in her living room, confused as to why the police were there.

The release of the videos on Thursday comes as police face national calls for reform over how they do their jobs following a reckoning that has swept the country in response to the police killing of George Floyd in Minneapolis and other allegations of police brutality.

Lightfoot made her remarks days after the city law department sought to stop a local TV station from publishing videos of the raid, while at the same time seeking sanctions against Young and her attorney. The city accused the two of violating a court confidentiality order that barred them from releasing the videos. City attorneys backtracked on Friday and filed a motion to drop the request for sanctions.

The mistaken raid came to light on Tuesday morning after CNN affiliate WBBM released an edited version of body camera footage showing parts of the raid, and redacted video showing Young naked in her living room while officers searched her home.

A review of the warrant, which was made public as part of a court filing by Young’s attorney, shows that police sought the warrant based on bad information from an informant. The warrant was approved by the Cook County State’s Attorney’s Office and a county judge.

City officials have declined to answer basic questions about the warrant and how it was served.

The target of the warrant was on electronic monitoring at the time and in compliance, a law enforcement official with knowledge of the raid told CNN. It was not immediately clear whether police checked with local and state officials about the target’s whereabouts. The felon was never found in the raid.

Young’s attorney, Keenan Saulter, hasn’t returned CNN’s calls seeking comment. In an interview with WBBM, Young likened the contact to sexual assault, since the officers found her naked and were wearing body cameras at the time. “In any other context, that’s sexual assault,” Young told WBBM.

Videos show that Young is distraught through the ordeal as she tries to tell officers they have the wrong home. The footage shows that Young was covered partially within about 30 seconds of the officers entering, then more fully with a blanket within a minute of the warrant being served and then brought into a bathroom to change about 12 minutes after that.

“I’m just standing there, terrified, humiliated, not even understanding why, in that moment, that this is happening to me,” Young told WBBM.

Multiple Chicago Police Department sources told CNN it’s not uncommon to find someone naked in their home when serving a warrant in the middle of the night, and that, because the department prioritizes gun arrests and the movement of firearms, officers who get warrants approved usually serve them quickly because weapons can easily be moved from targeted locations.

It’s also common for people to tell officers they have the wrong home because the person may not know a loved one living there is involved in a crime, the police sources said.

Neither Lightfoot nor Chicago Police Superintendent David Brown would comment on the information that led to the warrant or what rules, if any, police violated while the warrant was being served. A police department spokesman would not say what officers serving the warrant should have done differently.

Lightfoot said the video left her “upset, appalled as a human being and as a Black woman.”

“I’ve reached out to Ms. Young through her counsel to request an opportunity to speak with her directly,” Lightfoot said. “I feel like we’re talking to each other at podiums and press conferences, and I’d like to have that conversation with her in person.”

Bad info from an informant

The ordeal began in February of 2019, when Chicago police sought a search warrant based on information from a “John Doe” informant who identified Young’s townhome as the residence of someone police believed to be a felon with a firearm.

The warrant, which Young’s lawyer included in a court filing, included an address, apartment number and door color that turned out to be Young’s.

According to the search warrant, the informant in the case said they’d seen the target of the warrant with a handgun and ammunition inside the apartment within the last 48 hours.

Hours after the warrant was signed, body camera video shows officers battering Young’s door and finding her naked and distraught in her living room.

Body camera footage from the time the door was battered down to the time an officer cuffed Young shows about 15 seconds had passed, and it took a few more seconds for him to lock the handcuffs. He then drops to the ground to pick up a piece of clothing to place over her shoulders. The item leaves her exposed from the front while other officers continue to enter the house.

An officer who followed said “all the way to the left, go, go, go” as the officer is placing handcuffs on Young. Young asked “what is going on” as officers filed in.

Body camera footage shows one officer grab a large blanket, and then drop it after seeing an officer in front of him carrying a blanket to Young.

In total, Young stood partially exposed for just over a minute before a blanket covered her. After she was covered with a blanket, an officer brought her to the bathroom to change after about 12 minutes.

The investigation is likely to look at the information used to get the warrant as well as the conduct of officers during the warrant. Chicago police sources who reviewed the footage told CNN the raid followed general training guidelines during warrant services where guns are expected. The first officers through the door cleared rooms while one placed handcuffs on the adults until the space was secure, which is normal procedure for gun warrants.

At Thursday’s news conference, Mayor Lightfoot outlined changes that had been made to the city’s search warrant policy prior to the WBBM report, along with other reforms implemented this month. Some changes were implemented in January, after this case first came to her attention. Others were implemented more recently.

It’s not clear that supervisor approval would have altered the approval of the warrant that led officers to Young’s house. It was signed by a county judge who heard testimony from someone who identified Young’s home as the home of a felon and who swore under oath to being inside that home with the felon while he was armed.

Two police sources said the sergeant who oversaw the raid was not the regular supervisor for the officer listed on the warrant.

Getting guns off the street is a matter of cultural importance within the Chicago Police Department considering the scope of the city’s gun violence problem, and during news conferences, city leaders often tout the number of weapons taken each year.

At Thursday’s news conference, Brown said the city was on pace to seize 11,000 guns this year, “each a potentially deadly force encounter.”