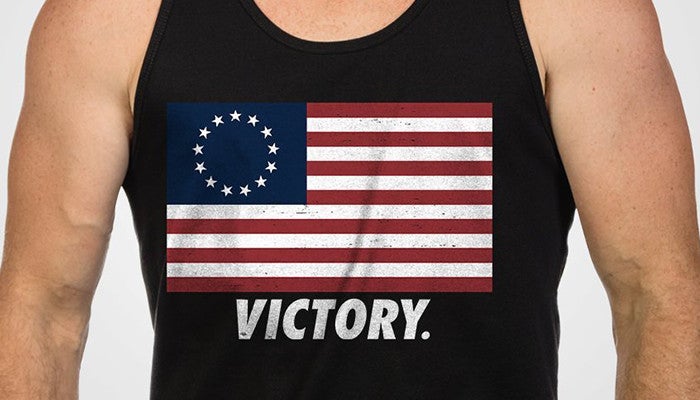 In the name of patriotism, Nine Line Apparel CEO Tyler Meritt is asking for an all-out Nike boycott. He claims the Betsy Ross flag-themed sneakers aren’t offensive — and in response has released a T-shirt line proudly sporting the flag’s design.

Hot off the presses and born from controversy, the shirts are meant to send a message.

“This is our victory over Nike. In Greek mythology, Nike is the goddess of victory and we think that we can redefine that symbolism,” Meritt said. “Victory in my mind is what you see behind you — U.S. manufacturing.”

Nike’s decision was reportedly made after former NFL player Colin Kaepernick expressed concerns about the flag’s early connections to slavery and association with white nationalist groups.

But Nine Line disagrees, saying the flag “in no way, shape or form alludes to slavery yet is a direct representation of freedom fought and earned by early Americans.”

“It shows, systemically, the decision that Nike has chosen to go,” Meritt said. “They chose Collin Kaepernick, a very divisive individual who kneels during the national anthem, something we vehemently oppose, and then to double down and listen to this individual.”

It’s not the first time the company has released a T-shirt or statement opposing Nike and Kaepernick — who argues that kneeling during the national anthem is a protest against systemic racism in the U.S.

In 2018, Nine Line first released a “Just Stand” T-shirt line after Nike’s ad featuring the former NFL quarterback, which read: “Believe in something. Even if it means sacrificing everything.”

The company also said they submitted a commercial to play during the 2019 Super Bowl with veterans and first responders to show their message of what sacrifice really is.

Nike’s move has sparked national outrage online from both sides, even prompting the governor of Arizona to announce the company would face serious financial repercussions in his state.

But, not everyone is questioning Nike’s decision.

WSAV spoke to another local clothing brand owner who thinks the company was right to pull the shoe.

“Collin Kaepernick, again, is at the heels or the helm of everything, and I think that Nike is probably smart in their decision to consider his opinion,” said Van Ellison-Seales, owner of 13 Bricks, a screen printer in Savannah.

In their most recent statement to MSNBC, the retail giant commented they would not release the sneaker “based on concerns that it could unintentionally offend and detract from the nation’s patriotic holiday.”