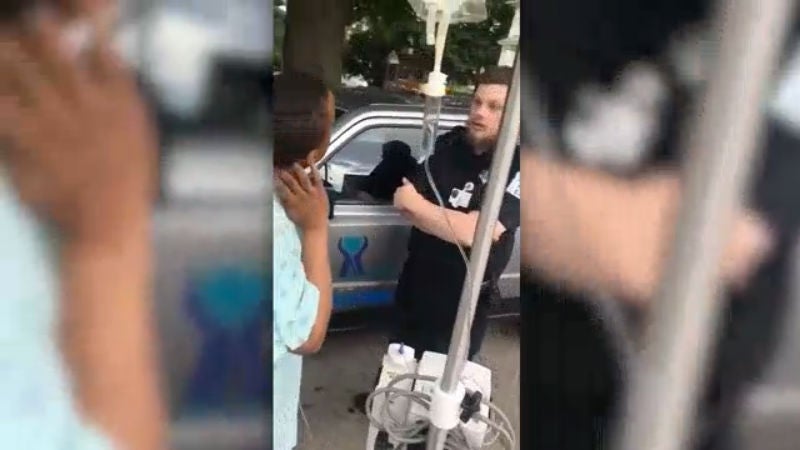 CHICAGO (AP) — Police are investigating why a black man being treated for double pneumonia at a northern Illinois hospital was arrested after a hospital security officer confronted him when he walked outside pushing an IV stand he was connected to.

Shaquille Dukes, 24, posted on Facebook that an “overzealous, racist, security officer,” confronted him outside Freeport Health Network while he still was wearing a gown issued from the hospital. Dukes said doctors had suggested he go for a walk and a hospital security officer accused him of trying to steal the IV stand to sell it on eBay.

A video of the June 9 incident shows Dukes and two other men being arrested on disorderly conduct charges by police in Freeport, Illinois, a city of about 25,000 with a black population of about 17%, 115 miles (185 kilometers) northwest of Chicago. Freeport’s city manager has asked a police chief from another community to conduct his own probe to determine if the officers on the scene acted properly.

“I make this (Facebook) post not for pity, but as a beacon of hope for all black and brown minorities dealing with the City of Freeport,” Dukes wrote. “We do not have to take this …. any longer!”

According to the police report, the security officer called police when the three men shouted at him and approached him in what he believed was a threatening manner. Police spokesman Dave Bayless said that when the security officer spotted Dukes and the other two men they were no longer on hospital property. The hospital said in a statement that patients are never supposed to leave the hospital while attached to an IV stand.

One of the officers who arrested Dukes wrote that the security officer was wrong in suspecting that the patient was trying to steal the equipment.

“Because there was property left at the hospital by Shaquille, specifically a bank card, I believed that Shaquille was probably going to return to the hospital with the IV cart,” the officer wrote. “Therefore I determined that Shaquille was not going to be charged with Attempted theft, but he would still be charged with Disorderly Conduct for the confrontation with” the security guard.”

The other two men were charged with disorderly conduct as well as resisting a peace officer.

Bayless said the investigation was continuing but that Dukes has not attended two scheduled meetings to speak to an independent investigator. Police have reviewed a video that came from the cell phone of one of the three men arrested, and video from police body cameras. He said no racial slurs or racially-charged comments were made by any of the officers at the scene.

Dukes could not be reached for comment and the hospital said that without patient authorization it could not share information about the incident.