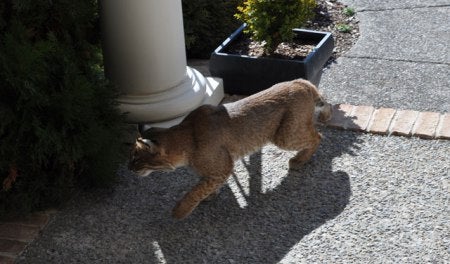 Shelley Dahms’ husband was working out of his office in his Brentwood, Tennessee, home when he looked out the window and saw a bobcat on his front porch.

“The bobcat walked down the porch in front of the windows and went down the stairs and back up and disappeared back through these bushes,” said Dahms.

Doug Markham with the Tennessee Wildlife Resources Agency offered his perspective on why a bobcat might approach a house.

“There might have been dog food or cat food or some other food somewhere. It may have just been a curious cat out wondering around. I don’t think it was probably dangerous but if you see one I would stay away from it,” said Markham.

Over the last few months, other viewers have contacted News 2 and reported bobcat sightings near their homes.

They rarely attack people, but will go after small animals.

“This is the second or third bobcat sighting photograph I have seen in the last couple of months where they were near a house. You just have to remember we are building houses out where they use to live and a lot of animals who use to live by themselves are now living with us,” said Markham.