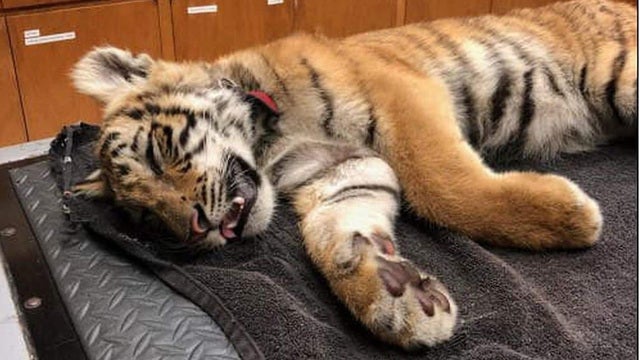 BROWNSVILLE, TX (AP/WCMH) – Smugglers left behind a live tiger cub in a duffel bag when they fled back to Mexico after attempting to cross the Rio Grande into Texas.

U.S. Customs and Border Protection officials on Tuesday said the male tiger, believed to be three or four months old, has been placed at the Gladys Porter Zoo in Brownsville, Texas.

NOT an average day in the field, as Brownsville Border Patrol Agents rescue a tiger! Updates to come.@CBPRGV pic.twitter.com/Q8OFlJc8VZ— Irma Chapa (@chapa_irma) April 30, 2018

Border Patrol agents patrolling Monday along the river near Brownsville saw three people trying to enter the U.S. illegally. An agency statement says the trio abandoned a bag and returned to Mexico.

Officers discovered the cub stuffed in the bag. Agent Robert Rodriguez said Tuesday that the tiger appeared calm and was possibly sedated.

According to the Washington Post, the cub was one of many intercepted at the border in recent years. A U.S. teenager was found with a tiger cub at a California checkpoint last year. In 2010 in Laredo, Texas, border agents recovered a caged and abandoned tiger.

Six other tiger cubs were sent to the Gladys Porter Zoo in 2010 after they were recovered in a Walmart parking lot, the Post reported.