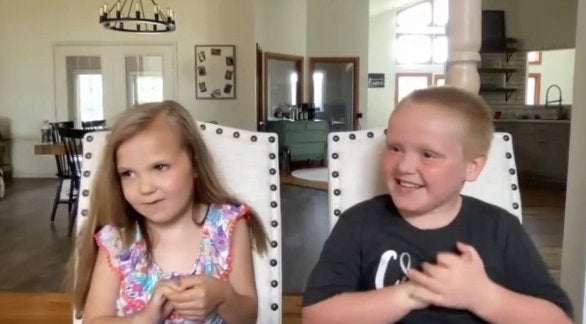 That friendship was front and center at this year’s Meramec Community Fair in Sullivan, Mo., where 8-year-old Jesse Starr, son of Shauna and Josh Starr, worked to get bidders to open up their wallets and buy his hog. Right next to him and his hog in the livestock auction barn, was his best friend, Claire Calvin, daughter of Rachel Record and Terry Calvin.

Their friendship is built on kindness and colored with fun.

“Claire is so sweet to me,” said Jesse.

But their bond was recently rocked with heartbreaking news. In spring of 2020, when Claire was just 6-years-old, something seemed off.

“Her dad noticed she was a little bit clumsier than normal and then the right side of her face started to droop,” said Record.

After extensive testing at St. Louis Children’s Hospital, they found a brain tumor on Claire’s brain stem and she was diagnosed with diffuse intrinsic pontine glioma, known as DIPG.

“It slowly starts deteriorating the child’s muscle movement and neuro system, but their mind stays totally fine,” said Record. “Even though she has difficulty talking, she knows exactly what she wants to say, it’s just the path to get it out that’s tough.”

“At diagnosis, children with DIPG typically have a 9-12 month life expectancy,” said Record.

But thanks to a clinical trial, Claire is beating the odds and MRIs show her tumor is shrinking.

“She is probably the toughest, strongest person I can ever imagine knowing. She does some really difficult things,” said Record. “She told me on Tuesday that she wants to do dance and gymnastics this fall so she is determined to walk and do all the things she wants to do.”

It will continue to take a lot of work, doctors’ appointments, medicine and therapy to make that happen. That’s exactly why Jesse decided to sell the hog he spent the last year raising and donate all the profits to Claire. When it was his turn at the fair’s 4H, FFA livestock auction, the bids kept getting higher and higher until Kathy Ruwwe was declared the winner of the $16,000 hog.

“To be able to help was kind of a blessing,” said Ruwwe, who also gives credit to whoever she was bidding against, noting they were just as committed to help the pair of friends.

Then Ruwwe told the auctioneer, “Sell it again.” That’s when two local businesses, CDKing Construction and Healing Stone Monuments, came together to buy it for $3,000. That meant a total of $19,000 would go to Claire and her family.

“Never in a million years did I ever anticipate it going the way it did,” said Record.

“When it comes to kids or helping people out, this community is beyond gracious,” said Shauna Starr, who noted a typical hog might bring $1,600 at the fair, but this underweight hog went for an incredible price.

But for Claire and Jesse, it was never about the money. It’s about being friends forever.

“Friends are friends and they need to be friends for life, and when your friends need help, that’s what you do, you help them,” said Starr.