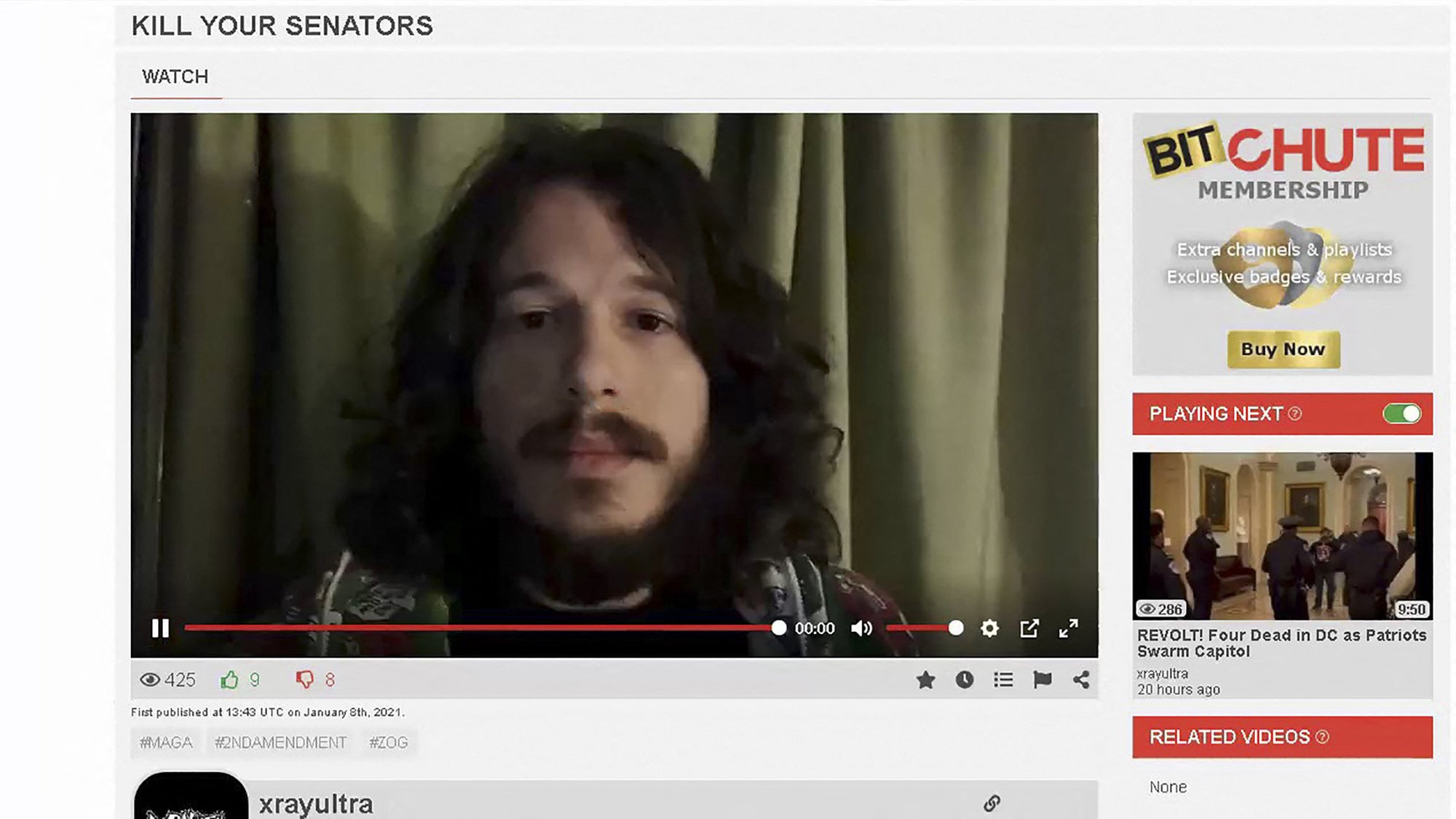 This undated video frame grab image obtained April 28, 2021, courtesy of the US Attorneys Office, shows Brendan Hunt,37, as he appears in a screenshot of a video he posted in which he called specifically for "killing your senators". - Can we, in times of extreme political tensions, call with impunity to kill American elected officials on social networks, in the name of the sacrosanct American freedom of expression? A popular New York jury will have to decide, after a week of hearings which made him relive the attack on the Capitol on January 6, 2021. Brendan Hunt, aka "X-Ray Ultra", a 37-year-old court worker, is accused of "threatening to kill" elected members of the US Congress - including Democratic leaders Nancy Pelosi and Chuck Schumer and young Alexandria Ocasio-Cortez (AOC) - with "the intention to interfere in the performance of their duties" or "to take revenge for having performed them". (Photo by Handout / US Attorney's Office / AFP) / RESTRICTED TO EDITORIAL USE - MANDATORY CREDIT "AFP PHOTO /US ATTORNEYS OFFICE/HANDOUT " - NO MARKETING - NO ADVERTISING CAMPAIGNS - DISTRIBUTED AS A SERVICE TO CLIENTS / TO GO WITH AFP STORY BY CATHERINE TRIOMPHE -""Kill your senators": New York lawsuit tests the limits of free speech" (Photo by HANDOUT/US Attorney's Office/AFP via Getty Images via CNN)
by: Lauren del Valle and Caroline Kelly, CNN
Posted: Apr 29, 2021 / 05:08 AM EST / Updated: Apr 29, 2021 / 05:08 AM EST

(CNN) — Brendan Hunt — whose father is a retired judge and who allegedly threatened the lives of House Speaker Nancy Pelosi, now-Senate Majority Leader Chuck Schumer and Rep. Alexandria Ocasio-Cortez — was found guilty of one count of threatening to assault or murder US officials by a jury in Brooklyn federal court on Wednesday, according to the Eastern District of New York.

Federal prosecutors charged and tried Hunt, the son of retired New York City family court judge John Hunt. Brendan Hunt will be sentenced in June and faces up to 10 years in prison, the Eastern District said in a statement.

Hunt took the stand in his own defense on Tuesday, telling the court that he didn’t really mean what he said in videos and messaging apps about killing elected officials. Hunt testified that he didn’t think his rhetoric about killing elected officials could bear real penal consequences because he’d seen the prevalence of “kill Trump” rhetoric, especially from celebrities.

Mark Lesko, the acting US attorney for the Eastern District of New York, praised the trial’s outcome on Wednesday.

“With today’s verdict, the defendant is now a convicted felon, not for his repugnant, racist rants, but because he threatened to attack and kill members of Congress to prevent them from carrying out their constitutional duties, and that is a federal crime,” Lesko said in a statement. “This Office will not tolerate threats of violence against public officials who are entrusted with upholding the Constitution.”

Prosecutors argued that Hunt had posted videos of himself at his Queens home in January discussing the January 6 riot at the US Capitol, threatening to kill senators and encouraging others to go back to the Capitol on Inauguration Day and take their guns.

In a Facebook account registered to HuntBrendan, prosecutors said, Hunt posted his praise in December for people who have fought back against Covid-19 mitigation protocols — and praised violence against police but also said people should instead “go after a high value target” like Pelosi, Schumer or Ocasio-Cortez.

The prosecution posed questions during the cross-examination about his academic history and intelligence, repeatedly establishing his adulthood. Hunt said he’s a “pretty immature 37-year-old” and after reflection during his stint in prison since his January arrest, he regrets the language he used.

“I had a lot of time to think in prison. I’ve been in prison for three months. A lot of that in solitary confinement,” Hunt said. “And I had to come to grips with the fact that a lot of my language was very inappropriate, it was irresponsible, careless and immature in a lot of ways.”

He blamed his behavior partly on marijuana and excessive drinking while being increasingly isolated in his apartment.

“I had made that video one night when I had been having a bunch of beers, smoking a little weed, taken a few bong rips, and I kind of did this spur of the moment video, just spewing out some rhetoric, and I didn’t think anything was wrong at the time,” Hunt said. “I thought it was sort of amusing in a way. And then a day later I checked back into it with a bit of a sober mind and saw that it wasn’t really sparking the dialogue that I had hoped to get going.”

Prosecutors previously showed the jury text messages that Hunt allegedly sent to his father last November, around the time of the presidential election. In the string of messages, Hunt allegedly mentioned Adolf Hitler and said the American people would support then-President Donald Trump if he overrode the democratic process like Hitler did to remain president despite the election looking like it was leaning in now-President Joe Biden’s favor.

When asked about discriminatory rants to his father in private text messages, Hunt testified that he purposely said extreme statements to anger his dad but doesn’t actually hold racist beliefs.