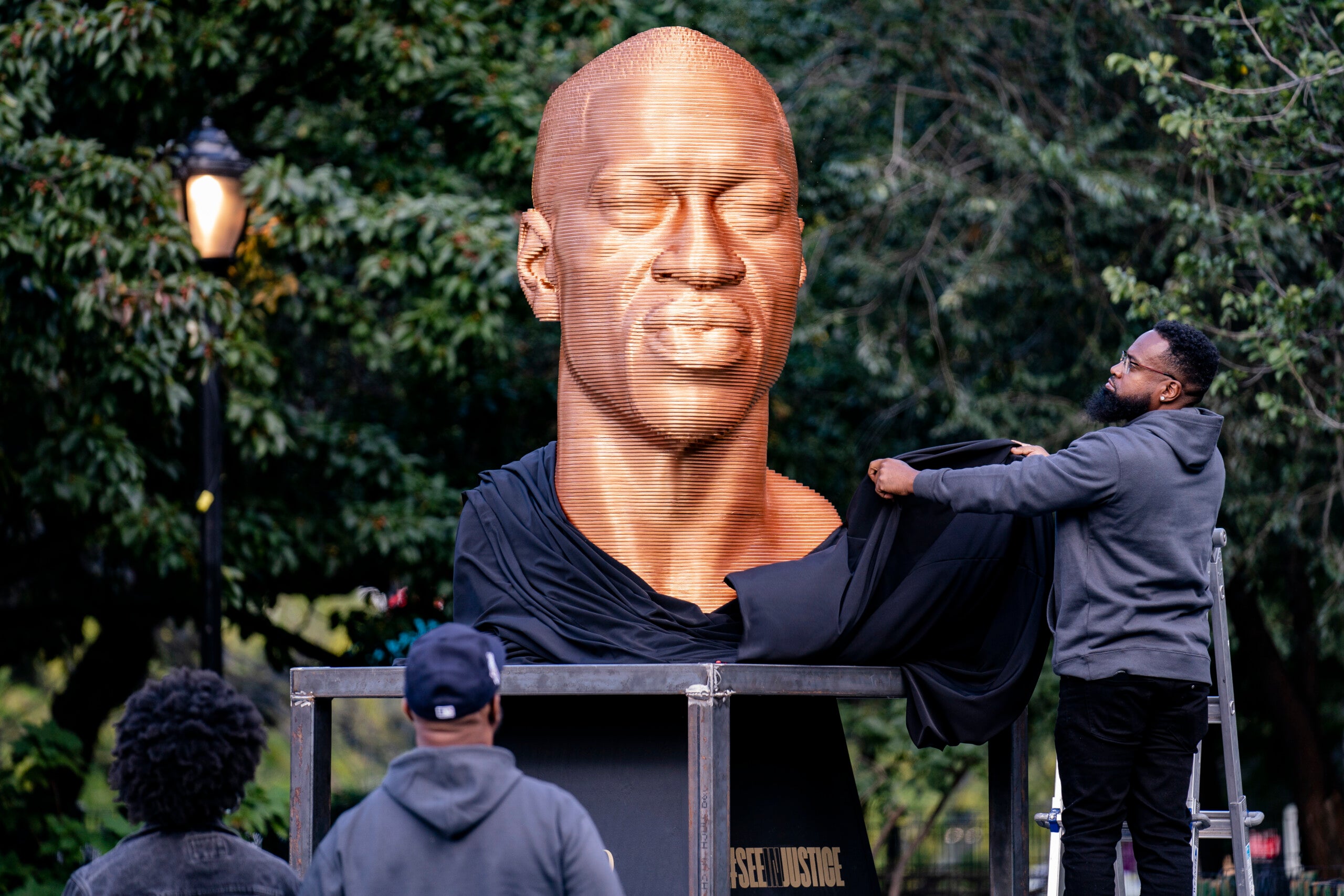 A sculpture of George Floyd, one of three sculptures as part of the "SEEINJUSTICE" art exhibition that also feature the likenesses of Breonna Taylor and John Lewis, is unveiled as Floyd's brother Terrence, second from left, looks on, Thursday, Sept. 30, 2021, at Union Square in the Manhattan borough of New York. The exhibition will be on public display at the square for one month and is intended to "to raise awareness of racism and actions for correction." (AP Photo/John Minchillo)
by: Liam Reilly, CNN
Posted: Oct 3, 2021 / 03:26 PM EST / Updated: Oct 3, 2021 / 03:26 PM EST

(CNN) — A bronze bust of George Floyd, part of Confront Art’s “SEEINJUSTICE” exhibition, was defaced on Sunday morning, according to the New York City Police Department.

The bust — one of the three statues at Confront Art’s installation, which debuted on Thursday but opened to the public on Friday evening — was defaced with a grey, water-based paint around 10 a.m. Sunday, NYPD detective Frances Sammon said.

“There’s video footage police were able to ascertain,” Sammon said. “They show a male ducking down under one of the statues. He then mixes something together, and, as he skates away, he throws a container of paint at the statue.”

Confront Art co-founder Andrew Cohen said that when he arrived a team of volunteers was already on the scene cleaning up the statue.

“They went to the hardware and bought supplies out of their own pockets,” he said. “This is inspiring teamwork and support from the community.”

Harmony Seaburg, one of the volunteers who helped clean up the statue, noted how difficult it was to see it in its defaced state.

“It was really hard to see this larger-than-life man like this,” Seaburg said. “We’re trying to get all the paint off his face, but it’s very emotional.”

Seaburg said that the five volunteers are strangers to one another.

“One man’s a painter, and he knew what to get,” Seaburg said. “There are about five of us and we’re not related to the project. As far as I’ve gathered, the people who work here are also doing this.”

Chris Carnabuci, the artist who made the statues, also praised the community’s response, likening it to the community response he saw when a bust of George Floyd was defaced in June in Brooklyn.

“In Flatbush, it was four days after the opening,” Carnabuci said. “In this case, the official opening with the press was Thursday, so it’s only been a few days.”

“I’m not shocked, but I’m still pissed,” he said. “It’s a very counterproductive thing to do, and it’s not the kind of civil discourse — the keyword being civil — I wanted.”