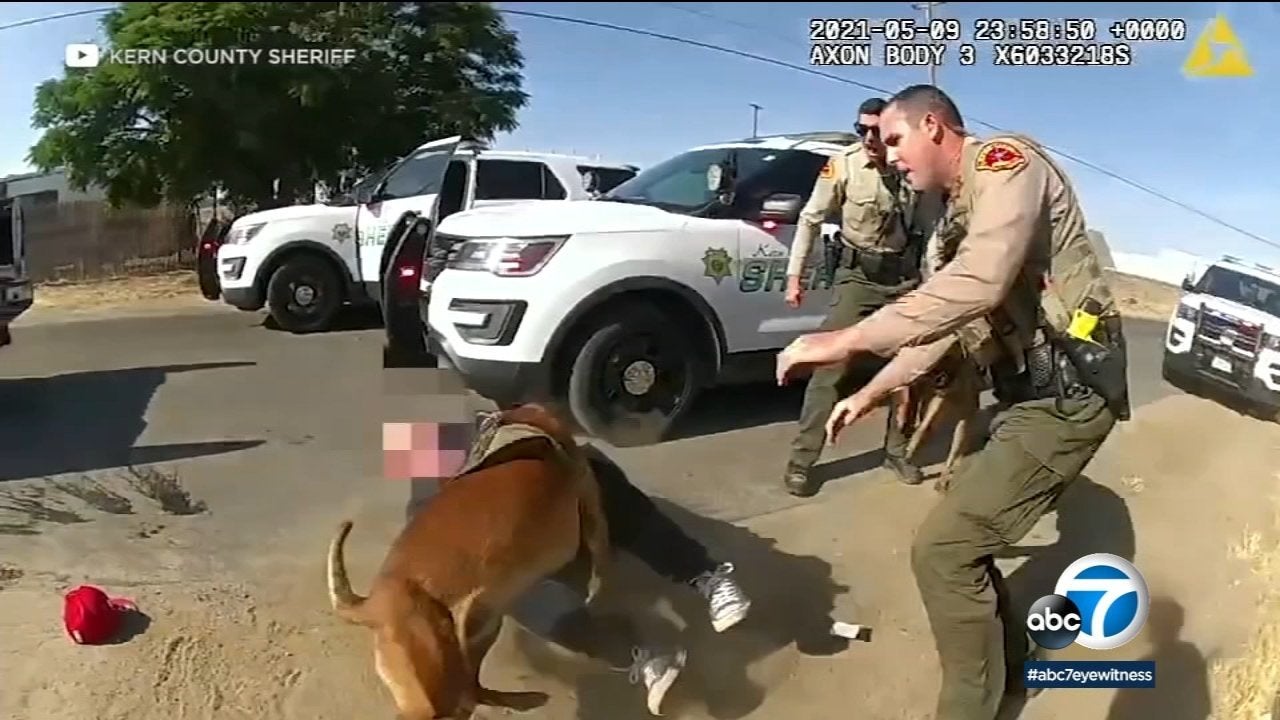 BAKERSFIELD, Calif. (KABC) — Disturbing body-camera video shows a California sheriff’s K-9 who was accidentally released attacking a man who was prone on the ground and complying with deputies’ orders.

Body camera from the incident was recently released by the Kern County Sheriff’s Department following an internal review.

In the video, the man – who was not the suspect in the stolen-vehicle incident – was lying on the ground as ordered by sheriff’s deputies.

The dog is accidentally released from a patrol vehicle and immediately charges after the man on the ground, biting down first on one arm and then the other, leaving him with bloody wounds as deputies try to pry the dog off.

It took significant effort to remove the dog, with a handler using a metal tool to pry the animal’s jaws off the man’s arm.

The K-9 was “temporarily removed from patrol work” while the K-9 handler was reassigned to other patrol duties until he and the dog were recertified with additional training. Both have since completed the additional training and are now back on duty.

The incident happened on May 9.

Deputies had tracked a stolen GMC Sierra truck to a rural neighborhood and found the vehicle on the street with several men gathered around talking to the driver.

When deputies ordered the driver to stop, he at first drove about 20 feet away and then stopped.

One of the men who had been standing around, holding a beer in his hand, was ordered down on the ground. He immediately complied, spilling his beer on the ground.

At that point, another deputy arrived. He apparently was opening the patrol vehicle door to establish cover for himself, possibly not realizing the K-9 was inside and not restrained.

As the dog got free, the deputy can repeatedly be heard saying “My bad, my bad my bad.”

After the incident, the driver of the stolen vehicle was arrested. Another man who was in the area was arrested on an outstanding warrant.

The man on the ground who had been bitten was brought to a local hospital and treated for his injuries.

The department continues to investigate the incident. The incident is not being treated as a “use of force” under the definition of the law because the use of the dog was “determined to be accidental,” the department’s Critical Incident Review Board determined.

“You all probably saw the video. It’s one of those that of course were not proud of. The important thing to note here is this was not a use of force. This was an accident.”

He noted the incident happened amid a chaotic, tense situation.

“There’s a lot of chaos going on. The other dog that’s there is really going off. Which amps that dog off. By the time that door was opened, that dog was ready to bite.”

“We’re pretty cautious. We are very thorough. We realized in the very beginning changes need to be made. We can’t have a K-9 biting people that maybe should not have been bitten.”