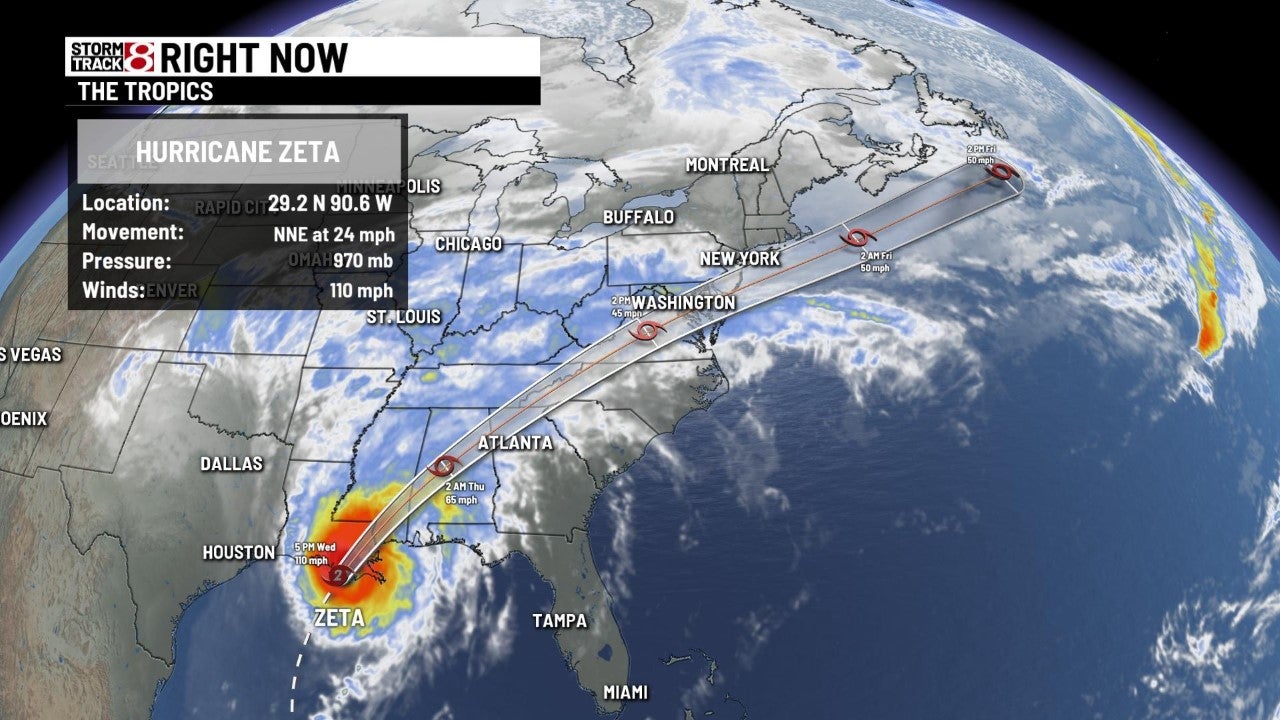 (CNN) — Hurricane Zeta is battering southeastern Louisiana and Mississippi with high winds, heavy rain and a life-threatening storm surge, according to the National Hurricane Center.

The Category 2 storm made landfall with winds of 110 mph, though it had weakened to a Category 1 storm with 90 mph winds as of 9 p.m. ET, the hurricane center said. Zeta is moving quickly at 25 mph as it heads into southeastern Mississippi and that speed is expected to increase Wednesday evening.

The eye of the storm passed over New Orleans at roughly 7:30 p.m., according to CNN crews in the city. Winds were beginning to pick back up after the eye’s passing, according to a tweet from the New Orleans government.

A weather station in Golden Meadow reported a wind gust of 110 mph, while the New Orleans Lakefront Airport has seen winds gusting more than 50 mph.

In New Orleans, emergency medical services responded to a high-voltage electrocution fatality related to a downed power line, according to a tweet from New Orleans EMS. The city’s office of emergency preparedness said it is tracking many downed power lines, trees and other debris in roadways.

More than 700,000 customers are without power in Louisiana, Mississippi and Alabama, according to poweroutage.us. In New Orleans alone, Entergy New Orleans is reporting more than 80,000 power outages, according to a tweet from the city’s emergency preparedness office.

A hurricane warning is in effect for an area that includes nearly 5 million people, but a much larger part of the Southeast will feel the effects of the storm over the next 24 to 36 hours.

The storm’s speed will allow it to travel farther inland without losing much intensity and will spread tropical storm conditions over several states, according to CNN meteorologist Brandon Miller.

Nearly 30 million people are under the warnings for Zeta’s winds that will gust in excess of 50 mph, including inland cities such as Atlanta, Birmingham and Montgomery in Alabama, and Asheville, North Carolina.

These areas can expect dangerous wind gusts capable of toppling trees and power lines and the possibility of tornadoes, beginning Wednesday night and lasting through Thursday as the system moves northeastward. Some flash flooding is possible from heavy rainfall, and widespread power outages are likely because of the winds.

Zeta is the 27th storm of the Atlantic hurricane season, one shy of tying the record for the most storms in a season. There were 28 storms in 2005, including 15 hurricanes.

Lafourche, St. Bernard and Terrebonne parishes have issued curfews for Wednesday evening, according to authorities in each parish.

St. Bernard Parish President Guy McInnis said in a video statement the parish is “receiving the full brunt of Zeta.” Multiple telephone poles are down and some areas of the parish are impassable, said.

“We have a lot of residents that have some serious damage to their homes. Our sheriff’s department and our firefighters are responding to that as we speak,” McInnis said.

Officials in Jefferson and Terrebonne parishes had issued mandatory evacuation orders ahead of the storm for coastal areas and places outside major levees. In New Orleans, voluntary evacuations were called for similar areas.

“I don’t think we’re going to be as lucky with this one,” said the city’s emergency preparedness director, Collin Arnold, noting New Orleans this year has skirted the impact of six named storms.

“They have been on the outskirts of several storms, but not had a direct hit yet this year,” he said. “On top of that, this storm is hauling, so there hasn’t been a ton of time to prepare.

“Recent storms had a lot of buildup, spending days over the Gulf,” Miller said. “Because of this, I expect this storm will likely catch many by surprise.”

Zeta’s speed will likely protect the area from widespread catastrophic flooding, but it also means damaging winds will spread well inland into Mississippi and Alabama, with heavy rains reaching Georgia and the Carolinas on Thursday, forecasters said.

The hurricane warning stretches from Morgan City, Louisiana, to the Mississippi-Alabama border. Storm surge warnings are in effect from the mouth of the Atchafalaya River to Navarre, Florida, plus Lake Borgne, Lake Pontchartrain, Pensacola Bay and Mobile Bay.

Preparing for yet another disaster

When Zeta strikes Louisiana, it will be the fifth named storm to do so this season, setting a record for the state.

Louisiana is recovering from the damage from those storms. About 3,600 evacuees are still displaced weeks after Hurricanes Laura and Delta caused major destruction, according to Louisiana Gov. John Bel Edwards.

Most of the evacuees have been displaced since August from Laura and have been spread among six hotels in New Orleans, the governor’s office said.

Billy Ewing, 71, has been living in hotels in New Orleans since Laura damaged his Lake Charles apartment. Ewing uses a wheelchair and said the trauma of being displaced has changed him.

New Orleans Mayor LaToya Cantrell said the city stands “ready and prepared and wanting to, again, encourage our people to not have fatigue as relates to being prepared.”

Because Hurricane Zeta is moving fast, it should move through the state quickly, Edwards said Tuesday. Zeta is still expected to be primarily a wind event for Louisiana, with New Orleans likely seeing winds in the 100 mph range, the governor said.

“It’s going to be a rough evening for Louisiana, particular in the southeastern portion. I am confident that we are well prepared for this,” Edwards said.

Alabama Gov. Kay Ivey issued a state of emergency Tuesday. On Wednesday, she asked residents to finish storm preparations quickly and warned even the central part of the state could see tropical storm winds.

“I urge everyone to quickly finish your preparations this afternoon and stay off the roads tonight, if possible,” Ivey said. “Zeta is gaining strength and will certainly give a punch to our state, and we all must be ready. Stay safe.”

“The resources … will help our neighbors in Louisiana respond to Hurricane Zeta and keep Louisianans safe,” Abbott said.

The wreckage in Mexico

Before turning its path toward the US coast, Zeta struck the Yucatán Peninsula in Mexico on Monday night as a Category 1 hurricane.

Teams waded through toppled trees Tuesday after the storm made landfall north of Tulum shortly after midnight.

The region is still recovering from Hurricane Delta, which hit just three weeks earlier roughly 60 miles away. And days before Delta, the region was pummeled by Tropical Storm Gamma — less than 15 miles from where Zeta made landfall.

How to make Gingerbread Hot Cocoa