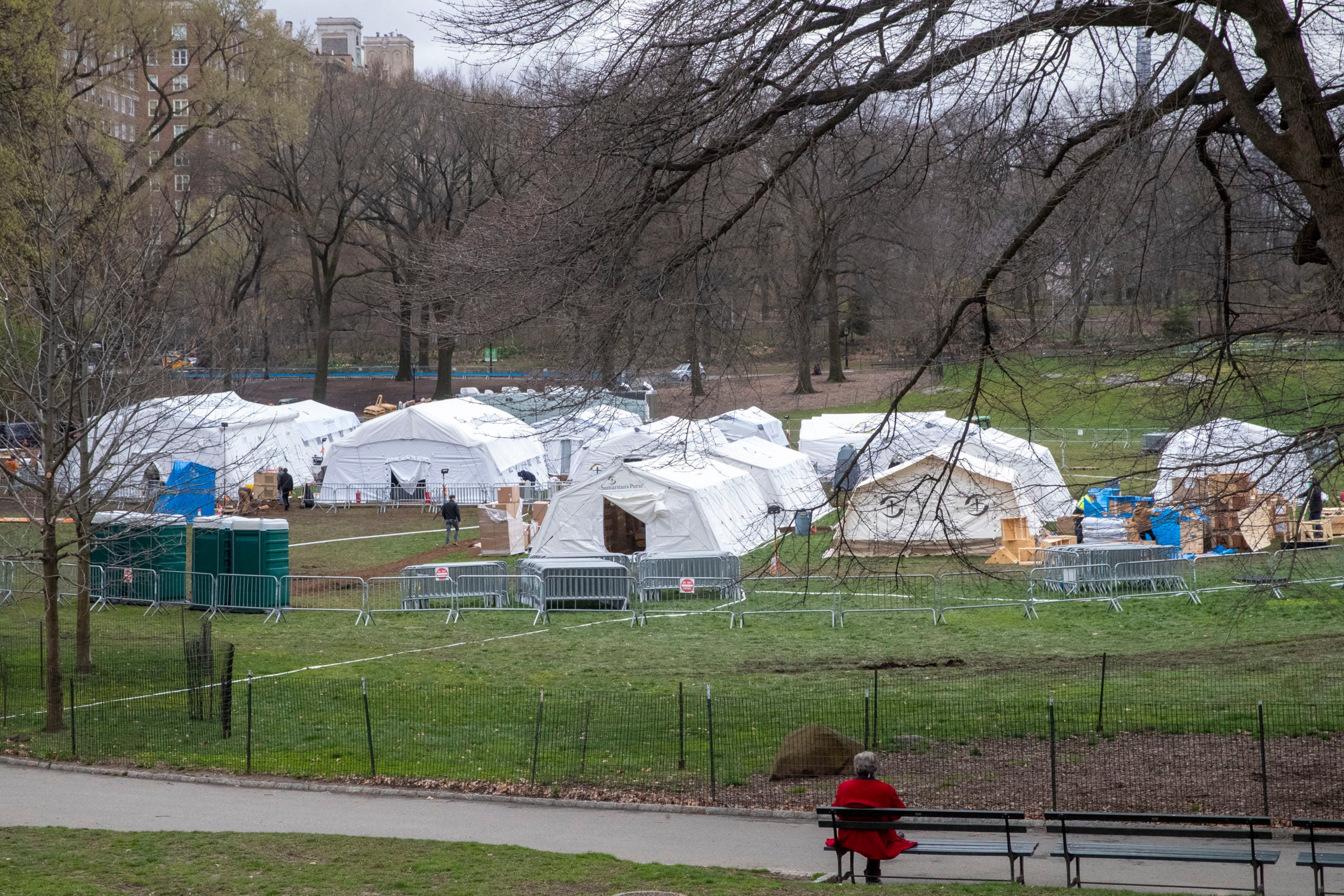 A woman watches from a park bench as the Samaritan's Purse crew and medical personnel work on preparing to open a 68 bed emergency field hospital specially equipped with a respiratory unit in New York's Central Park, Tuesday, March 31, 2020, in New York. The new coronavirus causes mild or moderate symptoms for most people, but for some, especially older adults and people with existing health problems, it can cause more severe illness or death. (AP Photo/Mary Altaffer)
by: The Associated Press
Posted: Apr 2, 2020 / 06:07 PM EST / Updated: Apr 2, 2020 / 06:07 PM EST

NEW YORK (AP) — There is a coronavirus ward in tents in Central Park. A makeshift hospital has been set up in a Manhattan convention center. Over the next few weeks, spaces including pro tennis courts, college dorms and a cruise ship terminal are supposed to start housing patients as New York state races to roughly triple its hospital capacity.

And still, officials worry whether the massive effort will be enough in the U.S. epicenter of the coronavirus pandemic.

A recent state chart tallying the planned hospital beds ended with question marks about how much space might be found in nursing homes. Some hospital and city leaders question whether too much temporary hospital space is being reserved for patients who don’t have the virus that causes COVID-19. And officials underscore that beds alone can’t solve a problem growing by more than 1,000 hospitalizations a day.

“Beds, we can find. Not easy, but we can find them. The harder components are the staff and the supplies,” Gov. Andrew Cuomo said Thursday.

As he spoke, over 13,300 coronavirus patients were hospitalized and more than 3,300 needed intensive care around the state, though mostly in New York City. The outbreak’s expected peak was still seven to 30 days away, the Democrat said.

When that happens, New York expects to need 140,000 hospital beds — compared to the 53,000 it had when the crisis began. So many seriously ill patients are anticipated that New York City is preparing to turn all its 20,000 permanent hospital beds into intensive care ones, while trying to add 65,000 temporary beds for other patients.

For most people, the new virus causes mild or moderate symptoms, such as fever and cough. For some, especially older adults and people with chronic health problems, it can cause more severe illness, including pneumonia, and can be fatal. It has killed over 2,300 people in New York state so far, according to the governor.

The scramble for hospital space, staff and ventilators is intended to ward off a dire worst-case scenario: medical centers becoming so swamped that some people die whose lives could otherwise be saved.

Even though they are working to squeeze in thousands of extra beds, some New York City facilities have been overloaded at times, transferring patients around the city and sometimes as far away as the Albany area.

Patient transfers to larger Mount Sinai hospitals ultimately eased the crunch. But if not for that, “two of our hospitals would be in terrible distress,” he said Wednesday.

“That can’t keep going. We’re continuing to grow capacity at all these hospitals, but at some point, we run out of space,” he said.

Some relief is now in sight, even from the windows of Mount Sinai’s flagship hospital in Manhattan.

Nine patients were being cared for Thursday, according to Samaritan’s Purse, the evangelical Christian relief group running the operation.

The group’s opposition to same-sex marriage sparked concern among some of New York’s Democratic political leaders. The organization’s CEO, the Rev. Franklin Graham, told Fox News on Monday that “we’re going to give the best health care we can to all New Yorkers — it doesn’t matter who they are or what they are.”

State, city and federal officials say they have lined up — and in some cases, opened — dozens of additional spots for temporary hospitals around the metropolitan area.

A Navy hospital ship, the USNS Comfort, is docked in Manhattan with 750 beds, three of them occupied as of Thursday, commanding officer Capt. Patrick Amersbach said in a telephone news briefing. The Javits Center, a glassy convention facility where such events New York Comic Con and the New York International Auto Show usually take place, opened Monday as a 1,000-bed hospital, with room for more.

Officials also are tapping colleges, the Aqueduct horse-racing track, a part of the tennis center that hosts the U.S. Open, a Brooklyn cruise terminal, and 20 hotels so far.

Decisions on routing patients to the temporary hospitals are being made from a state-run operations hub set up in the Javits Center, according to city Emergency Management Office spokesman Omar Bourne. A similar system has been used before during such disasters as Superstorm Sandy.

Some facilities are intended for COVID-19 patients who need hospitalization, but not intensive care. Others, including the Comfort and the Javits Center, are meant for patients who don’t have the virus but need care for other reasons.

That puzzles some at hospitals, and beyond.

City Council Health Committee chairman Mark Levine — who said last week he suspected he had the virus himself — urged Thursday that the Javits Center and the ship start taking coronavirus patients.

“The original plan for those facilities, that they would treat non-COVID trauma patients, is no longer workable,” he said on CNN.

Amersbach, the Comfort’s commander, said the ship and its medical providers would do whatever was asked. A request for comment was sent to the Federal Emergency Management Agency about the Javits Center facility.

While scouring for temporary hospital space, state and city officials are also sounding even more urgent calls for ventilators, medical personnel and protective gear for them.

Cuomo warned Thursday that the state’s supply of breathing machines could be exhausted in six days if the current rate of critical COVID-19 illness continues. Democratic New York Mayor Bill de Blasio said this week he has asked the federal government to supply 1,000 nurses, 150 doctors and 300 respiratory therapists by Sunday.

“The bed,” he said, “is only as good as the supplies, the equipment, and especially the people that go with it.”