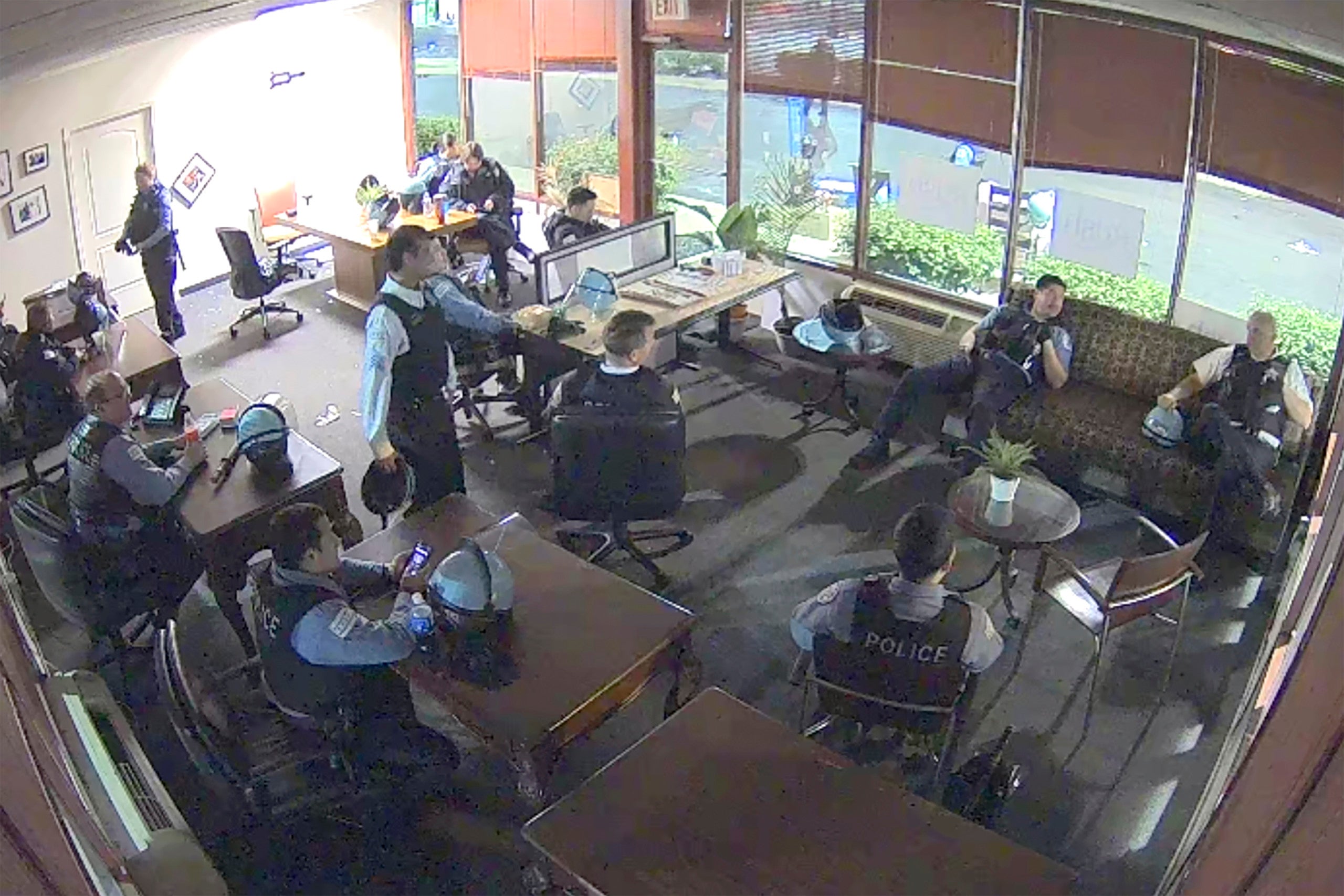 This still image taken from security video released by the Congressman Bobby Rush's Campaign Office shows Chicago police inside Rush's burglarized congressional campaign office in Chicago on Sunday, May 31, 2020. The police and supervisors appeared to be making popcorn and brewing coffee as people vandalized and stole from nearby businesses during unrest that spread across the city, a visibly angry Mayor Lori Lightfoot said at a news conference with Rep. Rush on Thursday, June 11. (Congressman Bobby Rush's Campaign Office via AP)
by: Konstantin Toropin and Melissa Gray, CNN
Posted: Jun 12, 2020 / 10:42 AM EST / Updated: Jun 12, 2020 / 10:42 AM EST

(CNN) — Chicago Mayor Lori Lightfoot says she was shocked by video showing 13 police officers lounging in a congressman’s office during protests and looting.

“It’s one of the most disgraceful, disrespectful things that I’ve ever seen, and we are absolutely not going to tolerate it,” Lightfoot told CNN’s Anderson Cooper on Thursday night.

“We can be supportive of people who are doing their jobs the right way and still hold the bad ones accountable,” she said. “That’s what has to happen.”

The officers were seen on video relaxing, sleeping, snacking and talking on the phone in the office of US Rep. Bobby Rush, Lightfoot and Rush said earlier.

The incident came to light after Rush reviewed security camera footage from his office, the mayor explained at a news conference. The campaign office was broken into on Sunday, May 31, when the surrounding strip mall was looted, Lightfoot told CNN. She said the police officers entered the campaign office early Monday, June 1.

At the time, protests were taking place in Chicago in the wake of the death of George Floyd in Minneapolis. Floyd died while in Minneapolis police custody a week earlier.

The Chicago Police Department tweeted Thursday it has launched an internal investigation into the incident, and Lightfoot said they are working to identify the officers involved. CNN has contacted the police union but has not received a comment yet.

“Today, literally, the officers were, through their various contacts, were trying to say the congressman actually invited us in and he’s lying now,” Lightfoot told Cooper.

“Bobby Rush is a former Black Panther. He didn’t invite the police into his office. And the fact that they would even say that — and even assuming that was true — five hours? When literally murder and mayhem is happening everywhere? Police officers are getting the crap beaten out of them?”