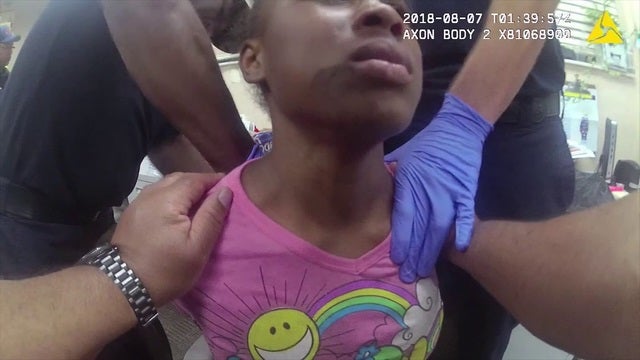 CINCINNATI (KRON/CNN) – An Ohio police officer is in trouble with his department after tasing an 11-year-old girl accused of shoplifting.

Cincinnati police say Officer Ben Brown violated policy. Much of the incident was caught on his body cam.

Moments after shocking 11-year-old Donesha Gowdy with a taser, Officer Brown escorts her back into a Kroger store where she and two other juveniles stole more than $50 in food and clothing.

“Sweetheart, the last thing I want to do is tase you like that,” Brown said in the video. “When I say stop, you stop. You know you’re caught. Just stop. That hurt my heart to do that to you.”

Showing his concern, Brown stays with Donesha to keep her calm while the fire department removes the barbs from her back.

Based on the department’s internal review, Brown’s first policy violation was not warning Donesha about the taser.

“Then I got to listen to all these idiots in the parking lot, tell me how I was wrong for tasing you,” Brown said in the video. “You broke the law and you fled as I tried to apprehend you.”

The use-of-force review also says Brown did not turn on his body camera in time and expressed a prejudice concerning race.

“You know what sweetheart? This is why there aren’t any grocery stores in the black community, because of all of this going on,” Brown said in the video.

A year-and-a-half ago, Brown was reprimanded for using a homophobic slur–also heard on his body camera.

Police Chief Eliot Isaac has not yet said what disciplinary action Brown could face for this recent incident but is open to updating the department’s use-of-force policy.

“I believe we may make some changes, some tweaks, but I believe overall we have a very solid policy,” Eliot said.

“The chief of police made up his mind before any investigation, before he knew the facts. He heard the age of the juvenile suspect and made a judgment call. Once he made up his mind, he wasn’t going to change his mind.”