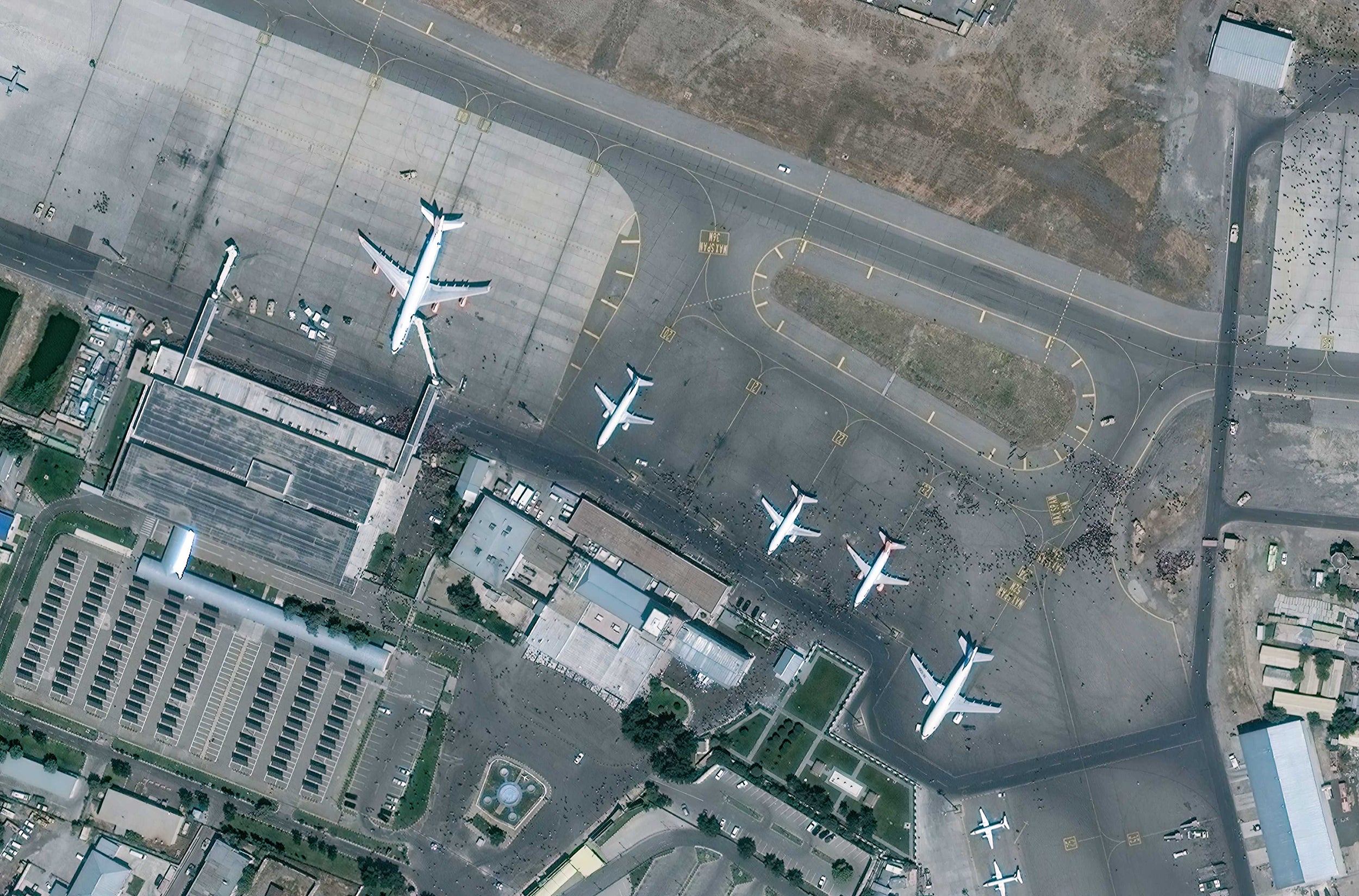 The State Department informed congressional staff Thursday that it is in touch with 363 US citizens in Afghanistan, 176 of whom want to leave. Maxar satellite imagery of the tarmac at Hamid Karzai International Airport in Afghanistan. (Maxar/DigitalGlobe/Getty Images)
by: Jennifer Hansler, CNN
Posted: Oct 22, 2021 / 03:57 PM EST / Updated: Oct 22, 2021 / 03:57 PM EST

(CNN) — The State Department informed congressional staff Thursday that it is in touch with 363 U.S. citizens in Afghanistan, 176 of whom want to leave, two sources familiar with the call said.

The figures presented on that call underscore the ongoing challenge faced by the Biden administration as Americans continue to come forward to seek help in leaving Afghanistan in the wake of the Taliban takeover and the chaotic U.S. withdrawal.

Thursday’s numbers — combined with evacuation figures since Aug. 31 — present a far higher count of Americans looking to leave Afghanistan than the administration publicly estimated at the time of the U.S. withdrawal.

The day prior before the U.S. military evacuation was completed, Secretary of State Antony Blinken said the State Department was tracking “a small number of Americans, under 200 and likely closer to 100, who remain in Afghanistan and want to leave.”

More than 200 U.S. citizens have been evacuated with the help of the U.S. government in the nearly two months since the military withdrawal, but the number of Americans who are seeking to leave Afghanistan is still in the range of 100 to 200 people as more people have come forward.

Biden administration officials have consistently pointed to the difficulty of tracking the number of U.S. citizens in the country, and it is unclear how many total Americans were in the country at the time of the U.S. withdrawal on Aug. 31.

“It’s important to remind everyone that these figures are far from static. They are constantly changing. Any figure, any precise figure is nothing more than a momentary snapshot in time,” State Department spokesman Ned Price said Friday. “The same is true of Americans in Afghanistan who wish to leave and who are ready to do so. That number is always changing.”

“Right now, the number of Americans in that category is between approximately 100 to 200,” Price said. “That figure has risen in recent days as more Americans in Afghanistan have decided to depart in light of our successful facilitation of dozens of departures in recent weeks.”

“We’ve also consistently said there’s a slightly larger universe of Americans with whom we’re in touch, and who are not yet ready for whatever reason to leave,” Price said.

“We are continuing to be in touch with them. If their plans do change, we will be glad to help facilitate their departure from Afghanistan should they choose to leave,” he said.

In his remarks at the end of August, Blinken noted that there “are long-time residents of Afghanistan who have American passports, and who were trying to determine whether or not they wanted to leave.”

“Many are dual-citizen Americans with deep roots and extended families in Afghanistan, who have resided there for many years. For many, it’s a painful choice,” he said.

“If an American in Afghanistan tells us that they want to stay for now, and then in a week or a month or a year they reach out and say, ‘I’ve changed my mind,’ we will help them leave,” Blinken added.

On Thursday evening, Price tweeted that the U.S. “has facilitated the departure of 234 U.S. citizens and 144 LPRs [lawful permanent residents] from Kabul since Aug. 31.”

“These are the numbers of people whose individual departures we directly facilitated. An additional number of U.S. citizens and LPRs have departed on private charters or have independently crossed via a land border,” another State Department spokesperson said Friday.

“The number of U.S. citizens and LPRs we assist is dynamic as we review manifests, receive reports from colleagues in the field, and assist with departures,” they said.

In addition to the more than 100 U.S. citizens who are seeking assistance in leaving Afghanistan, there are scores of Afghans — many of whom worked for the U.S. military — who were left behind during the U.S. military withdrawal and are desperately trying to leave.