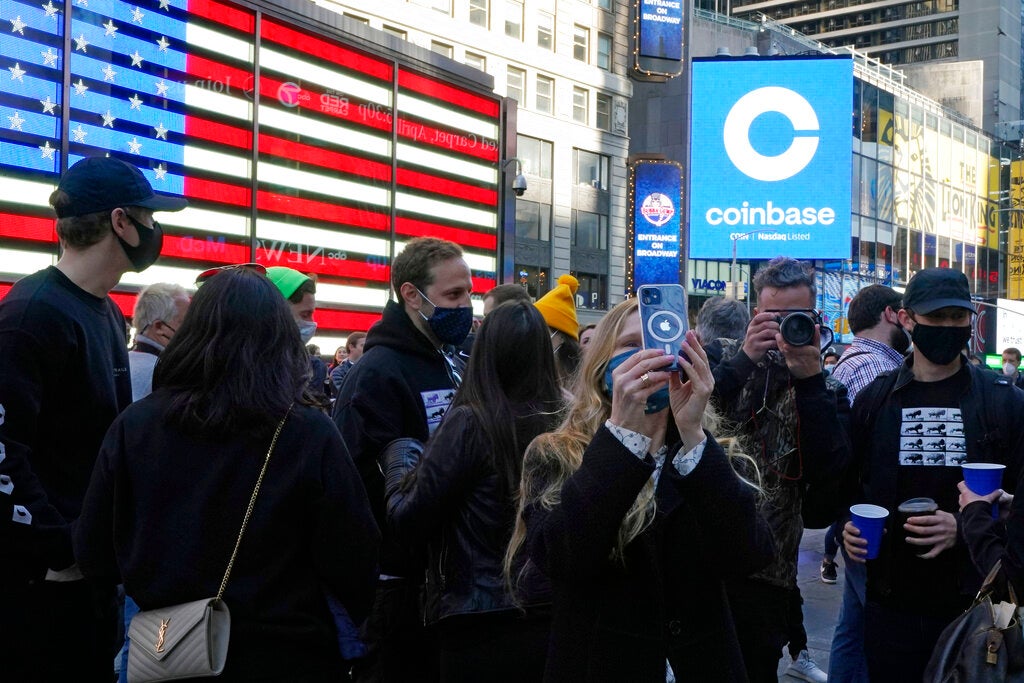 Wall Street will be focused on Coinbase Wednesday with the digital currency exchange becoming a publicly traded company.

Coinbase is making its initial public offering of stock with cryptocurrency chatter seemingly everywhere, even at the U.S. Federal Reserve. It is being incorporated into the business plans and accepted by major corporations like Tesla, PayPal and Visa.

“The Coinbase IPO is potentially a watershed event for the crypto industry and will be something the Street will be laser focused on to gauge investor appetite,'” Wedbush analyst Daniel Ives wrote this week.

There were 43 million verified Coinbase users in 2020, with 2.8 million making transactions monthly. Its revenue more than doubled to $1.14 billion last year and the company swung to a profit of $322.3 million after losing tens of millions in 2019.

An organization that deals in cryptocurrency, which is often used as away around institutional monetary systems and control, is an odd fit for a publicly traded company, which must file quarterly reports with regulators.

However, when Coinbase filed papers with U.S. regulators this year to go public, it said it would do so through a direct listing. That means it has avoided the typical agreements with big banks that would typically buy thousands of shares and promote them.

A direct listing allows insiders and early investors to convert their stakes in the company into publicly traded stock, which will hit the market Wednesday with no set price, as is the norm when an IPO is handled by big banks.

That could mean wild price swings when the stock ticker goes live. This week, Nasdaq gave the company’s stock a $250 reference price. That is unlikely to stick.

Shares of Coinbase, which will be traded on the Nasdaq under the ticker “COIN,’ will attract investors who want to get into the cryptocurrency space in addition to, or without buying any coins at all, said Lule Demmissie, president of Ally Invest.

“It could also be a less volatile security than the coins themselves,” Demmissie says.

Some Wall Street analysts project that Coinbase Global Inc. could be valued at $100 billion, based on private transactions of its shares.

That would make it one of the top 100 biggest publicly traded U.S. companies that will be far larger than the New York Stock Exchange or Nasdaq.

The Coinbase hype went into overdrive last week when the company reported estimates of its first-quarter results, including about $1.8 billion in revenue and net income between $730 million and $800 million.

Still, not everyone is convinced. David Trainer, CEO of investment research firm New Constructs, said Coinbase has “little-to-no-chance of meeting the future profit expectations that are baked into its ridiculously high valuation.”

Trainer last week put a valuation on Coinbase closer to $18.9 billion, arguing it will face more competition as the cryptocurrency market matures.

However Ives, of Wedbush, sees Coinbase as a window into the future.

“Coinbase is a foundational piece of the crypto ecosystem and is a barometer for the growing mainstream adoption of Bitcoin and crypto for the coming years,” Ives said.