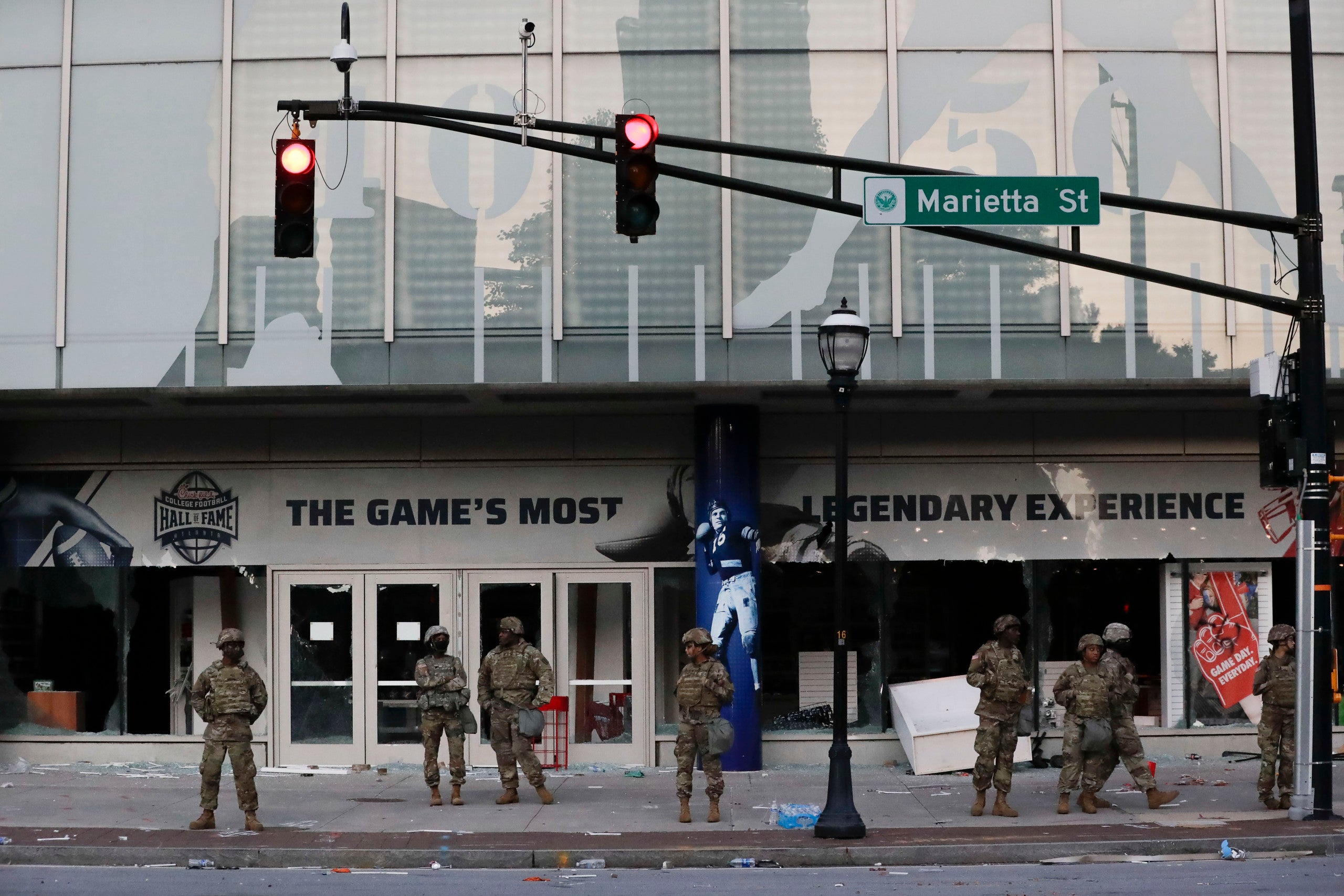 ATLANTA (AP) — The College Football Hall of Fame is boarded up and assessing damage from a destructive night of protests in downtown Atlanta.

The facility’s most valuable trophies and artifacts were moved to a secure facility in case additional trouble breaks out amid nationwide unrest over the death in Minneapolis of George Floyd, a handcuffed black man who pleaded to police that he could not breathe.

But, other than some broken glass that fell into a large exhibition area shaped like a football field, the interior of the hall was not breached by the protesters.

Previously located in South Bend, Indiana, the Hall of Fame opened a new $68.5 million facility in Atlanta in 2014, taking a prime spot adjacent to the Georgia World Congress Center and right across the street from Centennial Olympic Park.

It is part of a hub of downtown tourist attractions that also includes the Georgia Aquarium, the World of Coca-Cola, CNN Center, the National Center for Civil and Human Rights, and a giant Ferris wheel.

That area became the epicenter of Atlanta’s protests over Floyd’s death. Thousands of people jammed the streets, clashing with police and damaging businesses.

The Hall of Fame had been making plans to reopen after shutting down in mid-March because of the coronavirus pandemic. Beaudin said those plans likely will be pushed back because of the time needed to make repairs.

“We had been working through scenario A and scenario B,” she said. “Now, we have scenario C.”

More protests were staged Saturday in Atlanta, but no additional damage was reported to the Hall of Fame or other businesses around Centennial Olympic Park. The city was under a curfew and a heavy presence of police and National Guard soldiers curtailed a repeat of Friday night’s carnage.

Beaudin and other Hall of Fame officials surveyed the damage Saturday morning and were heartened to be joined by dozens of fellow citizens who turned up with brooms and trash bags to help clean up the debris.

The front of the facility was hastily boarded up and the collection of historic items — including a Heisman Trophy, a national championship trophy and countless other items documenting the history of college football — were removed from the hall.

“We very much wanted to get our eyes on everything,” Beaudin said. “We took the extra precaution to … move all the valuable artifacts, the trophies and everything else. We wanted to take an abundance of caution, so we moved them off site to a secure facility. There are some iconic items. We don’t want them falling into the wrong hands.”

In addition to welcoming thousands of visitors each year, the Hall of Fame hosts college football’s annual awards night and other events such as the Southeastern Conference media days.

The SEC was set to host its preseason media function at the hall for the second time in mid-July, though those plans are up in the air because of the pandemic.

If the league decides to stage the event in Atlanta, rather that holding it virtually, the Hall of Fame will have enough time to make repairs, Beaudin said.

“We will be full prepared to host that event if the SEC decides to move forward with it,” she said.