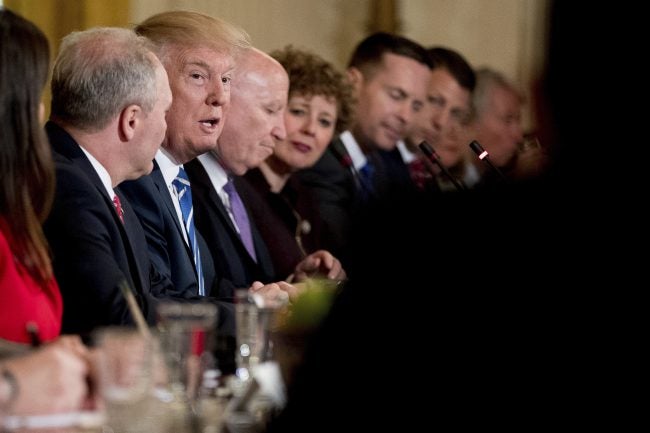 WASHINGTON (AP) – A powerful conservative backlash threatened to sink the new Republican health care bill Tuesday less than 24 hours after its launch, even as President Donald Trump and congressional leaders began trying to sell the legislation as the long-promised GOP cure for “Obamacare.”

But major obstacles loomed as key Republican lawmakers announced their opposition, and one conservative group after another torched the plan. The Club for Growth, Heritage Action for America, Americans for Prosperity and Tea Party Patriots variously derided the new bill as Obamacare Lite, Obamacare 2.0 and even RyanCare, in a dig at House Speaker Paul Ryan of Wisconsin.

The new GOP plan would repeal the current law’s unpopular fines on people who don’t carry health insurance. It also would replace income-based subsidies, which the law provides to help millions of Americans pay premiums, with age-based tax credits that may be skimpier for people with low incomes. Those payments would phase out for higher-earning people.

The legislation also would limit future federal funding for Medicaid, which covers low-income people, about 1 in 5 Americans. And it would loosen rules that Obama’s law imposed for health plans directly purchased by individuals.

Republican supporters and opponents are all intent on reducing the role of government in health care, but some House conservatives say the new bill doesn’t go nearly far enough.

For example, they are focusing on the system of refundable tax credits they denounce as a costly new entitlement. They’re demanding a vote on a straightforward repeal-only bill.

At the White House meeting Tuesday, Trump made clear to House Republicans that he would be personally engaging with individual members who oppose the bill as leadership tries to round up votes, according to a lawmaker present who spoke on condition of anonymity to discuss the private gathering.

Not long after, Trump appeared to be making good on his promise, tweeting at Sen. Rand Paul of Kentucky, who has criticized the bill.

“I feel sure that my friend @RandPaul will come along with the new and great health care program because he knows Obamacare is a disaster!” the president wrote. The president plans to reconvene the group next week and will meet with conservative leaders to discuss the issue Wednesday.

The concerted conservative opposition was a remarkable rebuke to legislation GOP leaders hope will fulfill seven years of promises to repeal and replace Barack Obama’s Affordable Care Act, pledges that played out in countless Republican campaigns for House and Senate as well as last year’s race for president. Instead, the groups that are uniting to oppose the new House legislation include many that sprang up to oppose passage of “Obamacare” in the first place.

“As the bill stands today, it is Obamacare 2.0,” the billionaire Koch Brothers-backed Americans for Prosperity and Freedom Partners Chamber of Commerce said in a statement. “Millions of Americans would never see the improvements in care they were promised, just as Obamacare failed to deliver on its promises.”

Republicans are pushing forward even without official estimates from the Congressional Budget Office on the cost of the bill and how many people would be covered, although GOP lawmakers acknowledge they can’t hope to match the 20 million covered under Obamacare.

Democrats say the bill would leave many people uninsured, shifting costs to states and hospital systems that act as providers of last resort. The bill also adds up to big tax breaks for the rich, cutting more than 20 taxes enacted under Obama’s heath law, with the bulk of the savings going to the wealthiest Americans.

“This is a tax cut for the wealthy with some health insurance provisions tacked alongside of it,” said Senate Minority Leader Chuck Schumer, D-N.Y.

Many conservatives are hardly happier.

The new legislation is “not the Obamacare replacement plan, not the Obamacare repeal plan we’ve been hoping for. This is instead a step in the wrong direction,” Sen. Mike Lee, R-Utah, said at an afternoon news conference with Rand Paul and members of the House Freedom Caucus.

Caucus members command enough votes to take down the bill in the House, but the group’s chairman, Rep. Mark Meadows of North Carolina, struck a conciliatory tone, emphasizing they are open to negotiation and view the leadership bill as a starting point.

Notes of caution also came from GOP governors, with Ohio Gov. John Kasich arguing that phasing out expanded Medicaid coverage without a viable alternative is “counterproductive” and Illinois Gov. Bruce Rauner saying he was “very concerned” that people will be “left in the lurch” under the House GOP plan.

AARP also objected, saying the bill would “dramatically increase health care costs for Americans aged 50-64” and put the health care of millions at risk. The organization, which has nearly 38 million members, was pivotal to the passage of Obama’s law in 2010.

Committee votes on the new bill are to begin Wednesday in the House, and GOP leaders hope to push it through the Senate soon thereafter.

Even as some Republicans expressed doubts about whether that would be possible, Speaker Ryan said at an afternoon news conference, “We’ll have 218 when this thing comes to the floor, I can guarantee you that.” That’s the number of votes needed for passage.