Couple missing in California fire sought shelter in a pond 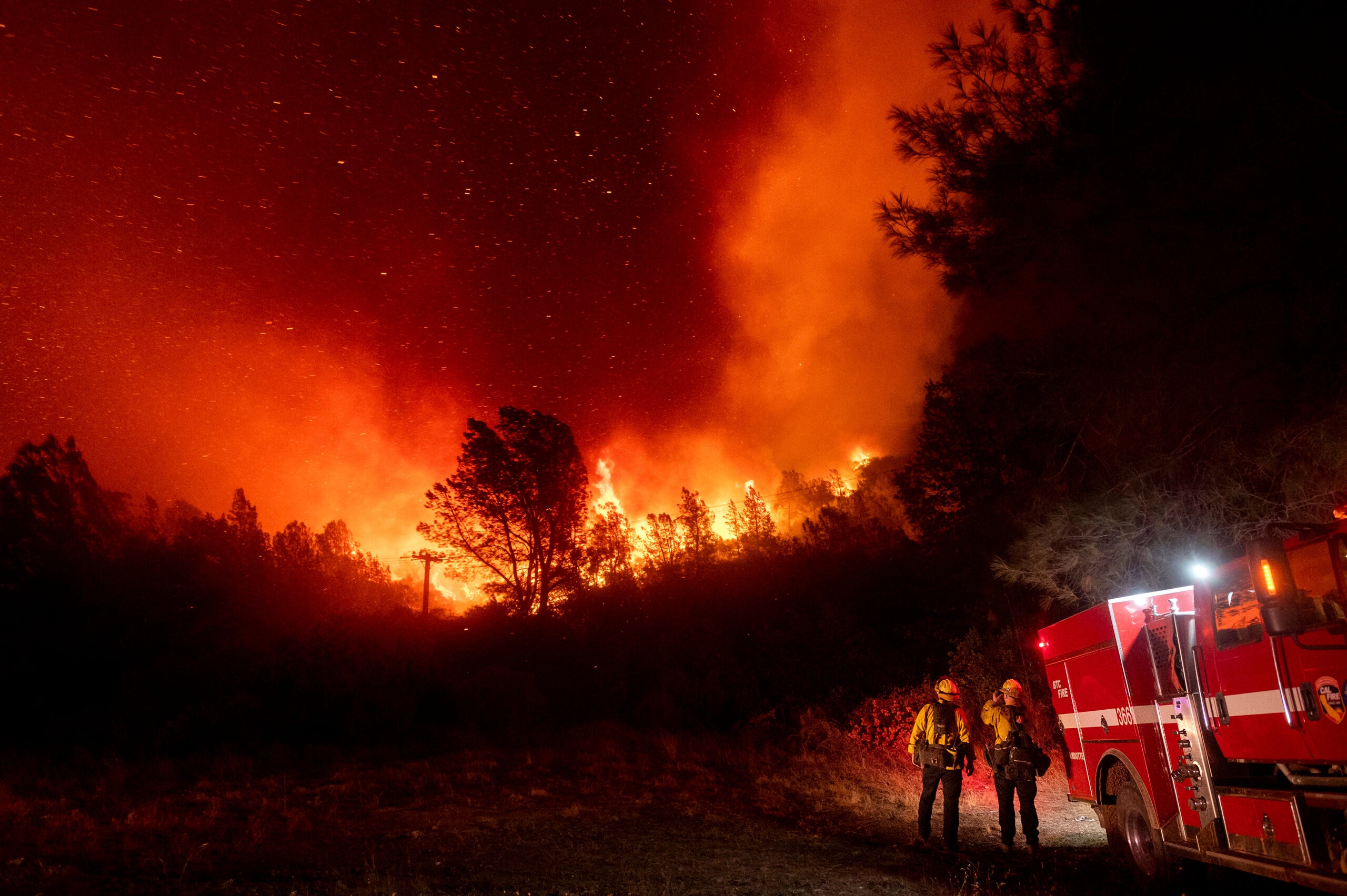 GRIDLEY, Calif. (AP) — Flames were bearing down on Sandy Butler’s home in the wooded hills of Northern California when she called her son to say that she and her husband were going to climb a fence and try to find shelter in a nearby pond.

It’s the last the family heard from the couple, who were missing Thursday after a fire roared with menacing speed across the Sierra Nevada foothills and destroyed much of the town of Berry Creek.

“We’re still hoping and praying for good news,” said Jessica Fallon, who has two children with the Butler’s grandson and considers them her own grandparents. “Everything is replaceable, but not my grandparents’ lives. I’d rather lose everything than those two. They kind of held the family together.”

The Butlers were among a dozen people believed missing in a fire that claimed at least three lives as it burned a 25-mile (40 kilometers) path in a day. More than 2,000 structures were burned in the lightning-sparked collection of fires now known as the North Complex burning about 125 miles (200 kilometers) northeast of San Francisco.

The wind-driven fire that jumped a river and ripped through dense forest and arid vegetation is the latest extreme fire to burn into the record books this year in California.

More than 4,800 square miles (12,500 square kilometers) have burned so far this year — more land than Rhode Island, Delaware and Washington, D.C. combined — and fall is typically the worst season for fires. Twelve people have been killed and nearly 4,000 structures have burned across the state.

The fires, fed by drought-sapped vegetation amid warming temperatures attributed to climate change, have spread at an alarming rate and given people less time to flee.

Hundreds of campers, hikers, and people spending Labor Day weekend at mountainside reservoirs and retreats had to be evacuated by military helicopter when they got stranded by a fast-moving fire that broke out in the Sierra National Forest in the center of the state during record-setting high temperatures.

Six of the state’s 20 largest fires on record are burning, including the August Complex, centered in wilderness about 130 miles (210 kilometers) north of San Francisco that is now the biggest fire in state history. It’s scorched more than 736 square miles (1,906 square kilometers). That exceeds a 2018 complex in the same region.

President Donald Trump spoke with Gov. Gavin Newsom on Thursday “to express his condolences for the loss of life and reiterate the administration’s full support to help those on the frontlines of the fires,” according to White House spokesman Judd Deere.

The North Complex fire is 10th in the record books and growing as firefighters try to prevent it from advancing toward the town of Paradise, where the most destructive fire in state history two years ago killed 85 people and destroyed 19,000 buildings.

Authorities lifted an evacuation warning for Paradise on Thursday, the day after residents awoke to similar skies as the 2018 morning when a wind-whipped inferno reduced the town to rubble. Under red skies and falling ash Wednesday, many chose to flee again, jamming the main road out of town in another replay of the catastrophe two years ago.

About 20,000 people were under evacuation orders or warnings in three counties from the fire.

Some 14,000 firefighters continued to try to corral 29 major wildfires from the Oregon border to just north of Mexico, though California was almost entirely free of critical fire weather warnings after days of hot, dry conditions and the threat of strong winds.

Smoke blew into vineyards in wine country north of San Francisco, and rose above scenic Big Sur on the Central Coast and in the foothills and mountains of Los Angeles, San Bernardino and San Diego counties in the southern part of the state.

Numerous fires continued to burn in Washington and Oregon, as well, and dense smoke blanketed much of the West Coast on Thursday morning, darkening skies with hazardous air pollution.

A fire raging along the Oregon border destroyed 150 homes near the community of Happy Camp and one person was confirmed dead, the Siskiyou County Sheriff’s Office said. About 400 more homes were threatened.

The fire that roared into the hamlet of Berry Creek, with a population of 525 people, incinerated countless homes.

Fallon, who had driven from the San Francisco Bay Area after hearing the Butlers were missing Wednesday morning, waited with her toddler son and 2-year-old daughter with dozens of evacuees gathered at a fairgrounds in the small city of Gridley, trembling in morning cold.

Among them was Douglas Johnsrude, who packed up his eight dogs and fled his home in the community of Feather Falls on Tuesday.

Johnsrude said he assumed his house trailer burned, which would be the second time he’s lost his home in a fire. He inherited his mother’s house after her death, but it was destroyed in a 2017 fire.

“The reason I haven’t rebuilt up there is because I knew it was going to happen again. And guess what? It happened again,” he said. “Seeing the smoke and the flames and everything else, it’s unreal. It’s like an apocalypse or something.”

Butte County spokeswoman Amy Travis described the evacuation center as a staging area while officials line up hotel rooms for families displaced by the fire amid the COVID-19 pandemic.

“COVID has changed the way we do sheltering,” she said. “We don’t have a lot of hotel rooms here in Butte County, and a lot of them are definitely busy with people that have already made their own hotel arrangements for evacuations.”

Fallon said she’d been peppering hospitals with phone calls in search of her grandparents.

Her daughter, Ava, doesn’t understand what’s going on. She thinks they’re camping. The girl typically speaks with her great-grandmother two to three times a day.

“I’m tossing and turning. I have just such bad anxiety. I’m just really worried about my grandparents,” Fallon said. “I’m hoping that they’re up there sitting in some water waiting to be rescued.”