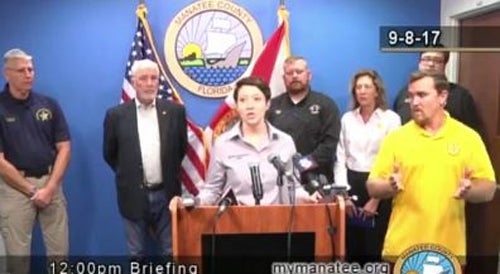 It’s a press conference no one will ever forget.

The video has gone viral. People all over the world have seen it, and the majority are stunned by what they witnessed.

Manatee County called a crucial press conference as Hurricane Irma approached the Tampa Bay area. On Friday, Sept. 8, county leaders were assembled at the podium and prepared to address the public. The Emergency Operations Center in Manatee County was up and running, ready to announce crucial information.

But, they were missing a very important person at the presser.

County leaders told WFLA that they were “in a pinch,” and needed an interpreter for the deaf. So they called on a county employee, a man named Marshall Greene who works as a member of the marine rescue unit in the county as a lifeguard. His bosses knew he had an understanding of sign language to communicate with a deaf older brother. So the employee was asked to step in and convey the information on evacuation orders.

However, it seems the county made a big blunder.

Nothing Greene signed during the press conference made sense.

She was shocked when she saw the press conference on television. Her company, VisCom – short for visual communications – provides interpreters for the county all the time.

However, she claims, she was never called to help.

“It was horribly unnerving for me,” she explained. “To watch that, knowing I could provide a qualified, certified interpreter.”

So, now the question is – why wasn’t someone called in who was a certified interpreter? County leaders tell WFLA they learned a lesson after making a mistake.

They admit they needed someone quickly, so they called in their employee at the last minute, even though numerous weather warnings had been plastered all over local and national news for more than a week.

The press conference turned out to be an insult and a disaster, according to members of the deaf community. When Greene began signing words like “pizza,” “monster” and “bear,” along with other gibberish during an emergency evacuation order – those who are hard of hearing were livid.

The former president of the National Association of the Deaf knew right off the bat that something wasn’t right. Chris Wagner spoke with us via interpreter from his home in Clearwater.

He pointed out – Greene was dressed in a bright yellow shirt, a major no-no for deaf interpreters since they always dress in black allowing their hands to be visible. Also, Greene kept turning his head and looking at the person talking at the podium.

That, in addition, is never done. The person communicating via sign language always looks straight ahead when communicating the content of the press conference or event.

“Everybody was talking about it on social media, everyone was shocked, asking leaders in the deaf community to do something about it,” said Chris.

He feels like this was a slap in the face, especially since he used to work in Manatee County for many years.

“It was obvious to me he wasn’t a professional interpreter. I was totally shocked,” he told us.

We spoke with the interpreter’s family Tuesday night. His father explained that Marshall was asked by his bosses to help out during the press conference, and that’s exactly what he did.

“He can’t expect to communicate something he doesn’t know.”

In the end, the deaf community maintains that the county is the one to blame for this fiasco, knowing that asking someone who isn’t certified in the highest levels of sign language communication should not be required to convey emergency information during a press conference of this nature.

The deaf community wants an apology from the county.

by: Annessa Chumbley / 27 mins ago