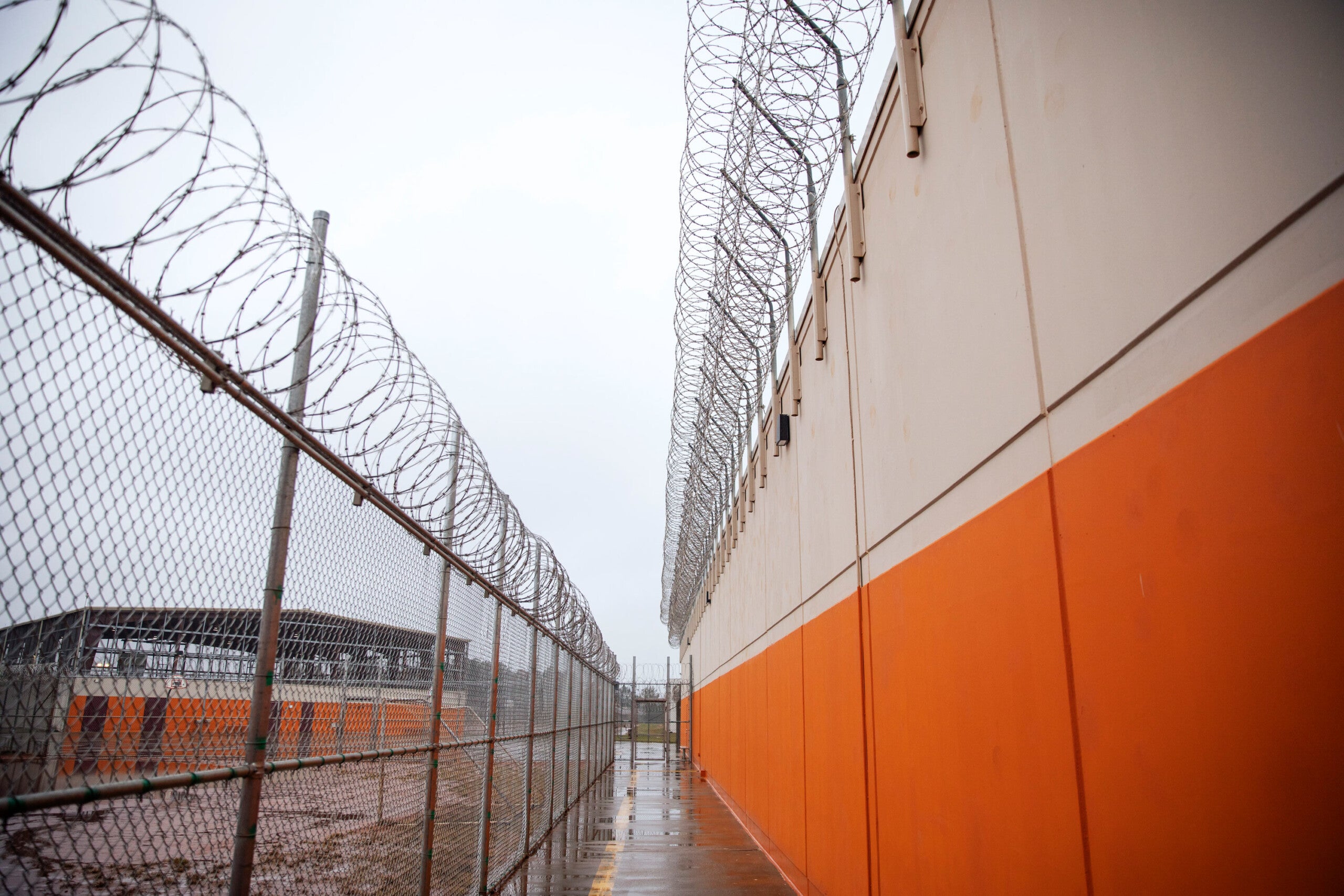 And something she says she’s heard too many times already.

Immigration and Customs Enforcement announced last week that a man who’d been detained at the privately run Stewart Detention Center in South Georgia died after contracting coronavirus. The 57-year-old, identified by Mexican authorities as Félix Montes de Oca Marcelino, had been hospitalized for weeks when he died in Columbus, Georgia, on Jan. 30.

It was the first death in ICE custody since President Biden took office. And immigrant rights advocates describe it as a glaring reminder of what they argue his administration needs to do: stop using private prison contractors to detain immigrants.

CoreCivic, the private company that operates Stewart, maintains that the health of detainees and staff are its top priority.

“This commitment is shared by our government partners and we have worked closely together with them to respond to this unprecedented situation appropriately, thoroughly and with care for the well-being of those entrusted to us and our communities,” spokesman Ryan Gustin said in a written statement detailing numerous safety protocols put in place during the pandemic.

Private contractors save taxpayers money and are better able to handle fluctuations in migrant populations, he said, describing their role in the US immigration system as “valued but limited.”

“The government would have to spend billions to build its own detention facilities and employ thousands of new federal workers,” Gustin said. “Additionally, ending the use of private contractors like us would lead to more and worse humanitarian crises.”

Growing government use of private prisons has sparked debate for years. And in 2016, the Justice Department announced it was “beginning the process of reducing — and ultimately ending” the use of privately operated prisons, stating they don’t meet the same level of safety and security as government facilities. That policy shift was quickly rescinded after President Trump took office.

In his first week in office, the Biden administration put it back on the table, directing the Justice Department not to renew contracts with private prisons.

But that decision didn’t apply to other government contracts with private prison companies.

Shahshahani, who’s campaigned for years to shut down Stewart and other similar facilities, says it should.

“That seems like an immediate next step that they could take,” she says, “cutting out the role of private prison corporations in the imprisonment of human beings.”

Asked about the President’s plans this week, press secretary Jen Psaki said Biden has “spoken about his concern with these facilities in the past.” But she added that the White House didn’t want to get ahead of newly confirmed Homeland Security Secretary Alejandro Mayorkas on the matter.

“But we’ll have more — we’ll defer to the secretary of Homeland Security for more specifics about the path forward,” Psaki said when asked why privately run ICE facilities hadn’t been included in the executive order Biden signed.

In response to questions from CNN about whether the possibility of ending ICE detention contracts with private companies was being discussed, the Department of Homeland Security said it’s “committed to ensuring that all those in our custody reside in safe, secure, and humane environments.”

“Secretary Mayorkas will review many immigration policies in the weeks to come,” the statement said, “including detention policy.”

Some advocates want the government to go even further

Immigration law requires detention in some cases, but advocates have long argued that officials have a large amount of latitude in who they choose to hold behind bars.

Some groups have been pressing for years for an end to the civil detention facilities that hold immigrants facing deportation, arguing that inhumane conditions inside these facilities endanger detainees’ health.

And since Biden took office, the calls for action have intensified.

“This is an opportunity to reset and end the mass immigration detention system that we have, to end this system as we know it,” says Denise Bell, researcher for refugee and migrant rights at Amnesty International.

For years, ICE has outsourced a large part of its detention operations to the private sector. A 2016 report found that about 65% of people ICE detained were held in for-profit facilities.

Detaining immigrants has been a default response for too long, Bell said, “particularly with the involvement of private companies running a lot of these facilities.”

“We have a multi-million dollar industry here,” she said. “There are built-in incentives to detain people.”

Gustin, the CoreCivic spokesman, dismissed those allegations as “broad generalizations from special interests playing politics rather than looking at the facts.

“The fact is we don’t set immigration policies — the federal government does. We don’t control immigration patterns — they change based on numerous geopolitical factors,” he said. “We also don’t enforce immigration laws or decide why or for how long people are detained.”

The number of people in ICE custody has decreased significantly in recent months as the agency released detainees due to health risks during the pandemic, and advocates argue that scaling back even more and shutting down facilities is more in reach than it’s ever been. There are less than 15,000 people detained in ICE facilities currently, according to the agency’s latest statistics. That’s far less than the average daily population in ICE custody in the 2019 fiscal year, 50,165 people.

“The current number should only trend down,” Silky Shah, executive director of Detention Watch Network, said on a recent call with reporters. “This has shown us that moving away from detention is actually something we can do.”

On Jan. 16, ICE officials notified the Mexican Consulate in Atlanta that Montes de Oca, who’d been held at the Stewart Detention Center in southern Georgia, was sick with COVID-19 and in serious condition, Mexico’s foreign ministry said in a statement. Two weeks later, he was dead.

Stewart, located in a rural area far from public view, was the focus of CNN’s 2018 four-part series, “Inside America’s Hidden Border.”

It’s one of the largest ICE detention facilities in the country. And according to the latest data from ICE, it’s currently the facility where the largest number of detainees have been held this fiscal year, with an average daily population of 773 as of Jan. 11.

More than 480 detainees there have tested positive for COVID-19 since February 2020, according to the agency’s latest statistics. Only one other facility — the La Palma Correctional Facility in Arizona, has seen more positive tests.

Asked about the higher number of deaths tied to Stewart, ICE spokesman Lindsay Williams said the agency couldn’t release any additional information, due to its ongoing investigation of the recent death.

“ICE is firmly committed to the health and welfare of all those in its custody and is undertaking a comprehensive, agency-wide review of this incident, as it does following all deaths in custody,” the agency said in its statement announcing the death.

“Stewart Detention Center has followed the Centers for Disease Control and Prevention guidelines, which have evolved over time, since the onset of the pandemic, and we’re continuing to work closely our government partners to enhance procedures as needed,” he said.

Shahshahani says she and other advocates who’ve been decrying conditions at Stewart for years are devastated, but not surprised, by the numbers.

Even before the pandemic, she says, officials weren’t doing enough to provide adequate medical care at Stewart.

She hopes the new administration will change course before the death toll climbs again.

With information from the Indiana Department of Health through March 3, 2021, this timeline reflects updated tallies of deaths and positive tests prior to that date.