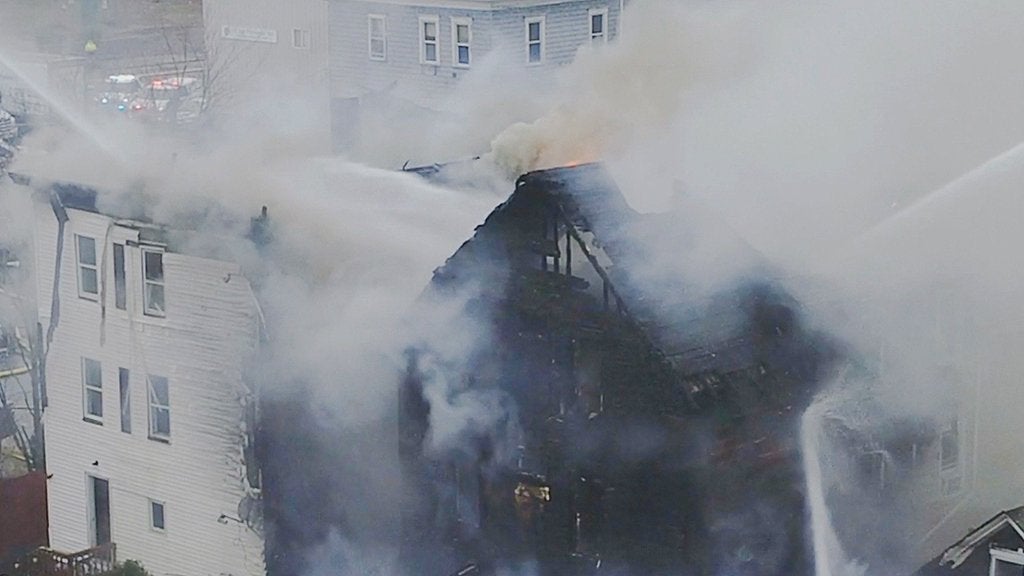 NEW BEDFORD, Mass. (WBZ) — A woman was seriously hurt in a huge fire that destroyed three houses in Massachusetts on Thanksgiving Day. The cause may be linked to the deep frying of a turkey.

Neighbors heard an explosion as flames broke out at a home on Washburn Street in New Bedford around 9:45 a.m. The fire quickly spread to the houses on each side by the time firefighters arrived.

Sandro Semedo, who lives across the street, dialed 911 before taking a cellphone video of the thick, black smoke.

“I smelled the smoke. Then, we all got scared,” Semedo said.

One woman was rushed to St. Luke’s Hospital, but the 27 others in the three homes were able to get out.

Maui Carvalho was one of them. She said the fire started on her neighbor’s back deck while he was trying to deep fry a turkey.

“He says he was cooking the deep-fried turkey and the propane tank exploded. I heard the explosion, but I thought it was thunder,” she told WBZ-TV.

Acting New Bedford Fire Chief Scott Kruger said they’re looking into the possibility the woman was in “a cooking mishap involving deep frying” but he added that the cause of the fire is still under investigation. They’re hoping to talk to the woman in the hospital to get more information.

Kruger said firefighters responded to as many as four other cooking “mishaps” in New Bedford on Thursday.

“You can’t underestimate the danger of cooking because people are amateurs,” the acting chief said, “things don’t always go well.”

Kruger said firefighters also rescued a dog from one of the burning houses.

“When people cook they need to be careful,” New Bedford Mayor Jon Mitchell told reporters at the scene.

Firefighters remained on Washburn Street through the night to keep an eye out for any hot spots that might pop up. The displaced families will be staying in Fairhaven on Thursday night thanks to the Red Cross.

Firefighters from Acushnet, Dartmouth and Fairhaven all helped put out the fire.