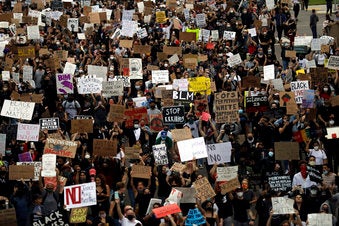 ATLANTA (AP) — Protesters stirred by the death of George Floyd vowed Friday to turn an extraordinary outpouring of grief into a sustained movement as demonstrations shifted to a calmer, but no less determined, focus on addressing racial injustice.

By early afternoon, demonstrations resumed for an 11th day around the country with continued momentum as the mood of the protests largely shifted from explosive anger to more peaceful calls for change. Formal and impromptu memorials to Floyd stretched from Minneapolis to North Carolina, where family were gathering Saturday to mourn him, and beyond. Services were planned in Texas for the following week.

Josiah Roebuck, a Kennesaw State University student and organizer of a demonstration that drew about 100 people Friday in an Atlanta suburb, said he was confident that momentum will be maintained.

“Once you start, you’re going to see this every day,” said Roebuck, who said he attended multiple other Atlanta-area protests. He added: “I just want minorities to be represented properly.”

Organizers have used various organizing tools including social media, which Roebuck said he used to gather people for the demonstration outside a Kennesaw store selling Confederate memorabilia. “Social media is a big influencer today,” he said.

Protests around the country had initially been marred by the setting of fires and smashing of windows, but Friday marked at least the third day of more subdued demonstrations, including a heartfelt tribute to Floyd Thursday in Minneapolis that drew family members, celebrities, politicians and civil rights advocates. At the service, strong calls were made for meaningful changes in policing and the criminal justice system.

And in a sign the protesters’ voices were being heard, more symbols of slavery and the Confederacy came down. Alabama’s port city of Mobile removed a statue of a Confederate naval officer early Friday after days of protests there, while Fredericksburg, Virginia, removed a 176-year-old slave auction block from downtown after several years of efforts by the NAACP. Other Confederate symbols have come down around the South in recent days as calls to remove them intensified during protests over Floyd’s death.

Also Friday, in Jacksonville , Florida, a large group of players, coaches, front office officials from the city’s NFL team and their families wore Black Lives Matter T-shirts as they walked from TIAA Bank Field to the sheriff’s office headquarters to raise awareness of racial injustice.

At demonstrations around the country, protesters said the quieter mood was the result of several factors: the new and upgraded criminal charges against the police officers involved in Floyd’s death; a more conciliatory approach by police who have marched with them or taken a knee to recognize their message; and the realization that the burst of rage is not sustainable.

“Personally, I think you can’t riot everyday for almost a week,” said Costa Smith, 26, who was protesting in downtown Atlanta.

Despite the shift in tone, protesters have shown no sign that they are going away and, if anything, are emboldened to stay on the streets to push for police reforms.

In New York City, Miguel Fernandes said there were “a lot more nights to go” of marching because protesters hadn’t got what they wanted. And Floyd’s brother Terrence appeared in Brooklyn to carry on the fight for change, declaring “power to the people, all of us.”

At the first in a series of memorials for Floyd, the Rev. Al Sharpton urged those gathered Thursday “to stand up in George’s name and say, ‘Get your knee off our necks!’” Those at the Minneapolis tribute stood in silence for 8 minutes, 46 seconds — the amount of time Floyd was alleged to be on the ground under the control of police.

Sharpton vowed that this will become a movement to “change the whole system of justice.”

As the protests have taken root over the past week, they have become communities unto themselves.

In New York, where residents have been stuck at home for nearly three months because of the coronavirus pandemic, residents who can’t go to restaurants are happy to be able to go a protest. People bring their dogs and share snacks and water bottles. They have been heartened by police who have joined them.

In Los Angeles, Billy Black, a 25-year-old African American attending a demonstration at City Hall on Thursday, said the recent calm of the protests helped lure him out to lend his voice after being concerned in previous days over TV images of marchers clashing with police in riot gear, police cruisers set ablaze and stores ransacked in broad daylight.

“I didn’t like knowing that people were outside taking a stand for something I believe in, while I was in air-conditioned comfort,” Black said.

Still, there were skirmishes in the Bronx borough of New York City and elsewhere Thursday. In Buffalo, a police commissioner suspended two officers after video from WBFO showed a 75-year-old man being shoved after walking up to police as they were enforcing a curfew Thursday night. The man appeared to hit his head on the pavement and blood leaked out as officers walked past. The man was hospitalized.

But in Texas, protesters cheered as Fort Worth officers joined the front of a march. Police in Austin also walked with dozens of members of the University of Texas football team as they made their way from campus to the state Capitol to honor Floyd’s memory. Once there, the group and police officers took a knee for nine minutes.

“This protest won’t just stop here,” junior safety Caden Sterns said. “To the white community … if you want change like you say you do, you must change. What I mean is, you must realize, and the oppressor must realize, you are oppressing.”