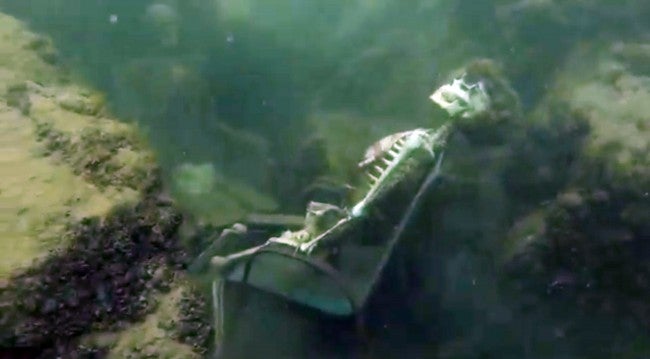 PARKER, Ariz. (AP) – A diver who felt he didn’t get his fair share of the credit for discovering two fake skeletons sitting in lawn chairs at the bottom of the Colorado River has removed them from their watery grave.

Martin Sholl said he spotted the skeletons, adorned in sunglasses, flip-flops, a bikini and a rainbow-colored wig, tethered to lawn chairs while scuba diving in the river near the Arizona-California line in May, Today’s News-Herald in Lake Havasu City reported Monday.

He alerted the La Paz County Sheriff’s Office, and authorities discovered the skeletons were plastic.

“Skeleton tea party,” Sholl said. “It was funny. The next day when my friend called and told me that the chaos I created was on every morning show in the country, I was shocked. … I found out they didn’t mention me at all.”

Instead, Sholl said the media focused on La Paz County Deputy Curt Bagby, who led the recovery of the skeletons and investigated how they ended up in the river. When Sholl called a news outlet, he was told that Bagby wasn’t sure he would want to speak.

“When you’re dealing with the media (as a law enforcement officer), you can’t assume that people want to be named,” Bagby told the newspaper.

Since the skeletons were discovered, they have become an attraction to recreational divers.

But Sholl said he pulled them from the river Friday and put them on his balcony in Parker. He said he would return the skeletons after Halloween.

The sheriff’s office says it wasn’t illegal for Sholl to take the skeletons. But Chris Chambers of the Buckskin Fire Department said he hopes Sholl doesn’t keep them long.

“Hopefully, he’ll give the skeletons to the Buckskin Fire Department, and let us take them back down,” Chambers said. “They’re a really neat attraction.”