Dog found suffering with cords embedded in its neck 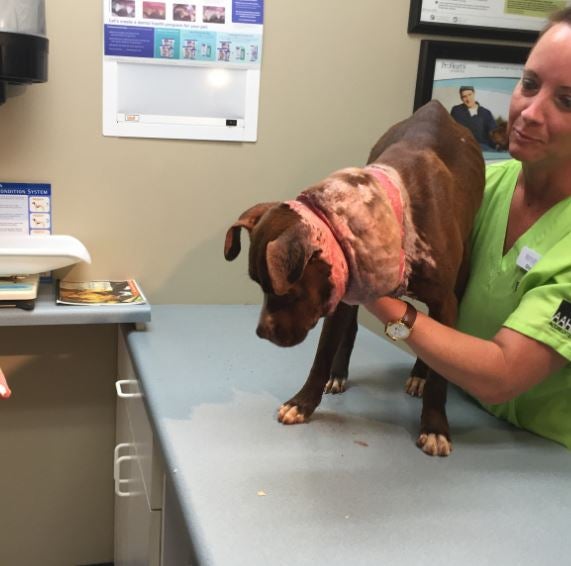 ABBEVILLE COUNTY, S.C. (WSPA) – A one and a half year old pit bull – now named Zena – was found with two metal cables and a collar digging into her neck Wednesday morning.

“This is one of the worst ones that we’ve seen,” said Dr. Robert Tope with the Electric City Animal Clinic. “The collars were embedded pretty deeply so this was a particularly bad case.”

After wandering into someone’s yard near Mount Olive Church Road in Abbeville County, Upstate Animal Rescue was contacted and Zena was eventually brought to the Electric City Animal Clinic for treatment.

Dr. Tope said the wounds happened over a period of weeks, and Zena could’ve eventually been strangled to death. He said it’s unclear if the injuries were intentional, but the signs of neglect are evident, and these cases are often found with dogs that have been tethered.

“There was some scarring going on and then healing and then scarring on top of that so this is not something that just happened.”

He said their main focus now is helping Zena get better.

“We’ve clipped and cleaned that area and flushed the wounds out. We’re doing to leave them open for a few days and then reassess after that time. She’s on antibiotics and anti-inflammatory’s.” He said she was also thin and has been welcoming food. He said he expects Zena will recover. “These wounds will get better in short order so that’s good.”

As for emotional scars, he said this dog doesn’t appear to have any.

“Even with the wounds that she has, she’s been very very sweet and I wouldn’t see her changing.”

Anyone with information on Zena’s owner or has seen the dog before is asked to contact the Abbeville County Sheriff’s Office. If you’d like to help with Zena’s medical costs, Upstate Animal Rescue is accepting donations using Paypal uarsc@yahoo.com or through calling (864)-225-0015.