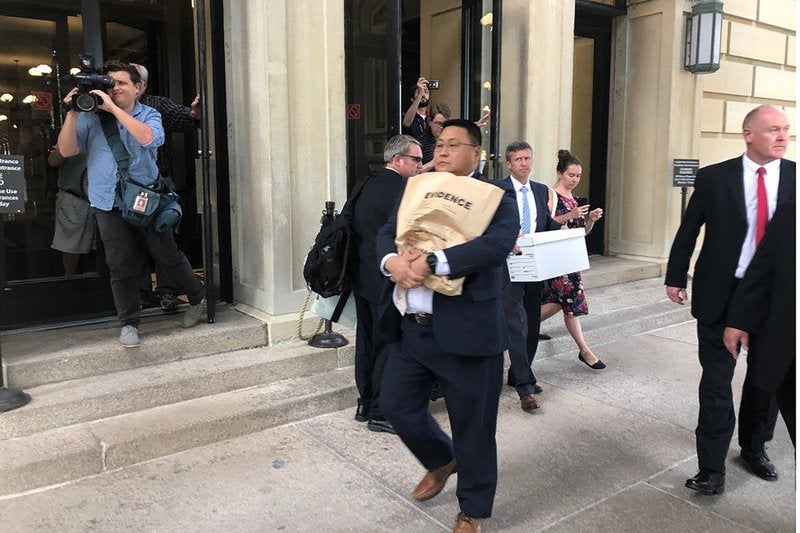 SPRINGFIELD, Ill. (AP) — FBI agents carried materials in bankers’ boxes and grocery bags out of the Illinois Capitol building on Tuesday, and multiple media outlets reported that and other raids were linked to a Democratic state senator.

FBI spokesman John Althen said the agents were in the building for “law enforcement activity” but declined to elaborate.

Multiple media outlets reported that the raids were conducted at Sen. Martin Sandoval’s Capitol office in Springfield, his district office in the Chicago suburb of Cicero and his Chicago home. The Chicago Tribune reported that a man who answered the door at Sandoval’s home said he was not home.

The suite door to Sandoval’s office would not open when an Associated Press reporter tried to enter at around the time the raid was taking place. Attempts to reach Sandoval by phone were unsuccessful.

Several men in dark suits and ties could be seen walking from the Senate Democrats’ side of the Capitol, carrying the bags and boxes of materials. The word “evidence” could be seen written across at least one of the bags. Photos from some media outlets also showed people carrying boxes from his home.

Sandoval, 55, has served in the Senate since 2003, representing a district on Chicago’s southwest side. He is chairman of the powerful Transportation Committee and was a driving force behind a 19-cents-a-gallon increase in the gas tax to help fund Democratic Gov. J.B. Pritzker’s $45 billion capital construction plan to rebuild roads, bridges and schools.

Republicans criticized him in August when a photo from a fundraiser appeared on social media showing what appeared to be a mock assassination of President Donald Trump. Sandoval later said neither he nor his staff was aware that an entertainment vendor had a beverage dispenser shaped like a rifle and pointed it at someone wearing a Trump mask. He expressed “my deepest regret that this unfortunate incident took place at (an) event in my name.”

It wasn’t clear whether Sandoval’s work on the gas tax plan or his fundraiser had anything to do with the raids.

In August, state Sen. Thomas E. Cullerton pleaded not guilty in Chicago federal court to charges that he took more than $250,000 in salary and benefits over a three-year period from the Teamsters while allegedly doing little or no work.