Slain shooting suspect was a regular at Portland protests 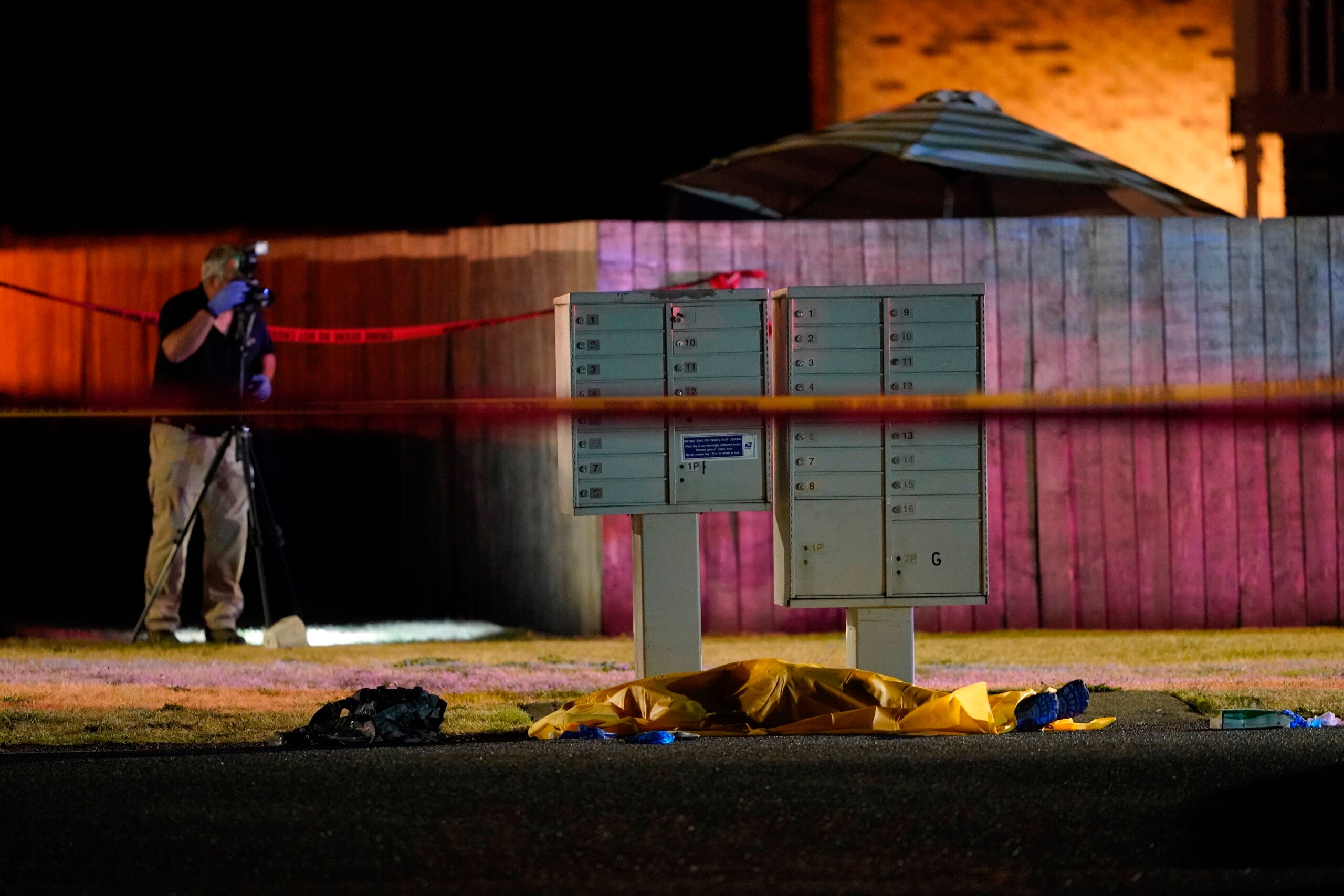 Officials work at a scene late Thursday, Sept. 3, 2020, where a man suspected of fatally shooting a supporter of a right-wing group in Portland, Ore., the week before was killed as investigators moved in to arrest him in Lacey, Wash. Michael Reinoehl, 48, was killed as a federal task force attempted to apprehend him in Lacey, a senior Justice Department official said. Reinoehl was the prime suspect in the killing of 39-year-old Aaron “Jay” Danielson, who was shot in the chest Saturday night, the official said. (AP Photo/Ted Warren)
by: MICHAEL BALSAMO and TED WARREN Associated Press
Posted: Sep 4, 2020 / 06:28 AM EST / Updated: Sep 4, 2020 / 08:34 AM EST

PORTLAND, Ore. (AP) — The man believed to have fatally shot a supporter of President Donald Trump following skirmishes between Black Lives Matter protesters and a pro-Trump caravan in Portland, Oregon, was a regular at the demonstrations that have roiled the Northwest city for months.

Michael Forest Reinoehl, 48, had described himself in a social media post as “100% ANTIFA,” and suggested the tactics of counter-protesters amounted to “warfare.” He had been shot at one protest and cited for having a gun at another.

Reinoehl was himself killed Thursday when he pulled a gun as a federal task force attempted to apprehend him near Lacey, Washington, the U.S. Marshals Service said in a statement.

The arrest attempt came shortly after Reinoehl gave an interview to VICE News in which he appeared to acknowledge having killed Aaron “Jay” Danielson, 39, on Saturday. In the interview, Reinoehl said he “had no choice” but to do what he did because he thought he and his friend were about to be stabbed.

“You know, lots of lawyers suggest that I shouldn’t even be saying anything, but I feel it’s important that the world at least gets a little bit of what’s really going on,” Reinoehl told the TV news program. “I had no choice. I mean, I, I had a choice. I could have sat there and watched them kill a friend of mine of color. But I wasn’t going to do that.”

His sister said in a text message to AP that she told police he appeared to be a person caught on video running from the scene of the fatal shooting. She provided the statement on the condition of anonymity, citing dozens of threats her family had received since people online identified him from a video of the shooting.

Danielson was fatally shot in the chest Aug. 29 after some participants in a caravan of Trump supporters, estimated at about 600 cars, drove downtown and encountered Black Lives Matter protesters. Skirmishes broke out, with people in the caravan firing paintball weapons at people in the street. Video taken by a live-streamer appeared to show Danielson, a member of the right-wing group Patriot Prayer, spraying pepper spray just before he was shot.

Earlier, on July 5, police cited Reinoehl on allegations of possessing a loaded gun in a public place, resisting arrest and interfering with police.

On July 26, Reinoehl was shot near his elbow after he got involved in a scuffle between an armed white man and a group of young people of color. The man who was carrying that gun, Aaron Scott Collins, told The Oregonian/OregonLive that he and a friend had just left a bar when they saw the group harassing an older Black man. His friend began filming them with a phone, and the group confronted them, calling them Nazis, he said.

In the ensuing scuffle, Collins said, he was struck in the head with a skateboard and fell down. He felt people trying to grab his gun from its holster, and he decided to pull it out to get control of it. Reinoehl, whom he did not know, then began grabbing at the slide, Collins said.

Reinoehl later that day spoke to an AP videographer. His arm was wrapped in a bloody bandage; he said he was on his way to meet protest medics so they could change it.

He said he didn’t know what had started the altercation between Collins and the group, but that several people had decided to intervene when they saw Collins fighting with minors.

“As soon as the adults jumped in, he pulled out a gun,” Reinoehl said. “I jumped in there and pulled the gun away from people’s heads, avoided being shot in the stomach and I got shot in the arm.”

He added: “It’s escalating to a point where they’re trying to disrupt us in every way that’s illegal. They’re shooting at us, they’re sending people in who are starting fights. It’s terrible. … It’s warfare.”

Reinoehl was also wanted on a warrant out of Baker County in eastern Oregon, where court records show he skipped a hearing related to a June case in which he has been charged with driving under the influence of controlled substances, reckless driving, reckless endangerment and unlawful possession of a firearm.

Police said he drove on an interstate at up to 111 mph, with his daughter in the car, while racing his 17-year-old son, who was in a different vehicle. His daughter also has attended protests with him; at one, she was photographed carrying a baseball bat.

“I’m trying to give her an education,” he told the AP. “She’s going to be contributing to running this new country that we’re fighting for.”

Reinoehl wrote on his Facebook page that he was a professional snowboarder for Deviation, a Portland ski and snowboard company, and he posted several videos of himself and his son snowboarding. But in a statement Monday, Deviation said Reinoehl had never been an employee or sponsored athlete of the company.

One friend who knows Reinoehl through snowboarding said he had been sponsored by various companies over the years and had sometimes won “big air” competitions — to the point that his nickname became “Big Mike.” The friend described him as “a really nice guy, a gentle giant” who sometimes fashioned himself into “a defender role.” The friend spoke on the condition of anonymity, citing threats he had received online. He sent Reinoehl a message recently to ask if he was all right; Reinoehl hadn’t responded, he said.

In her text message, Reinoehl’s sister said they were never close and she had been estranged from him for the past three years. She said she learned about his potential involvement in the shooting when she received a threatening phone call Sunday — the first of 60 that day.

“Violence and hate are never acceptable,” she added. “When people use violence to fight for peace and equality, all we get is more violence, and the cause suffers.”

This story has been corrected to show Aaron “Jay” Danielson was 39, not 38.