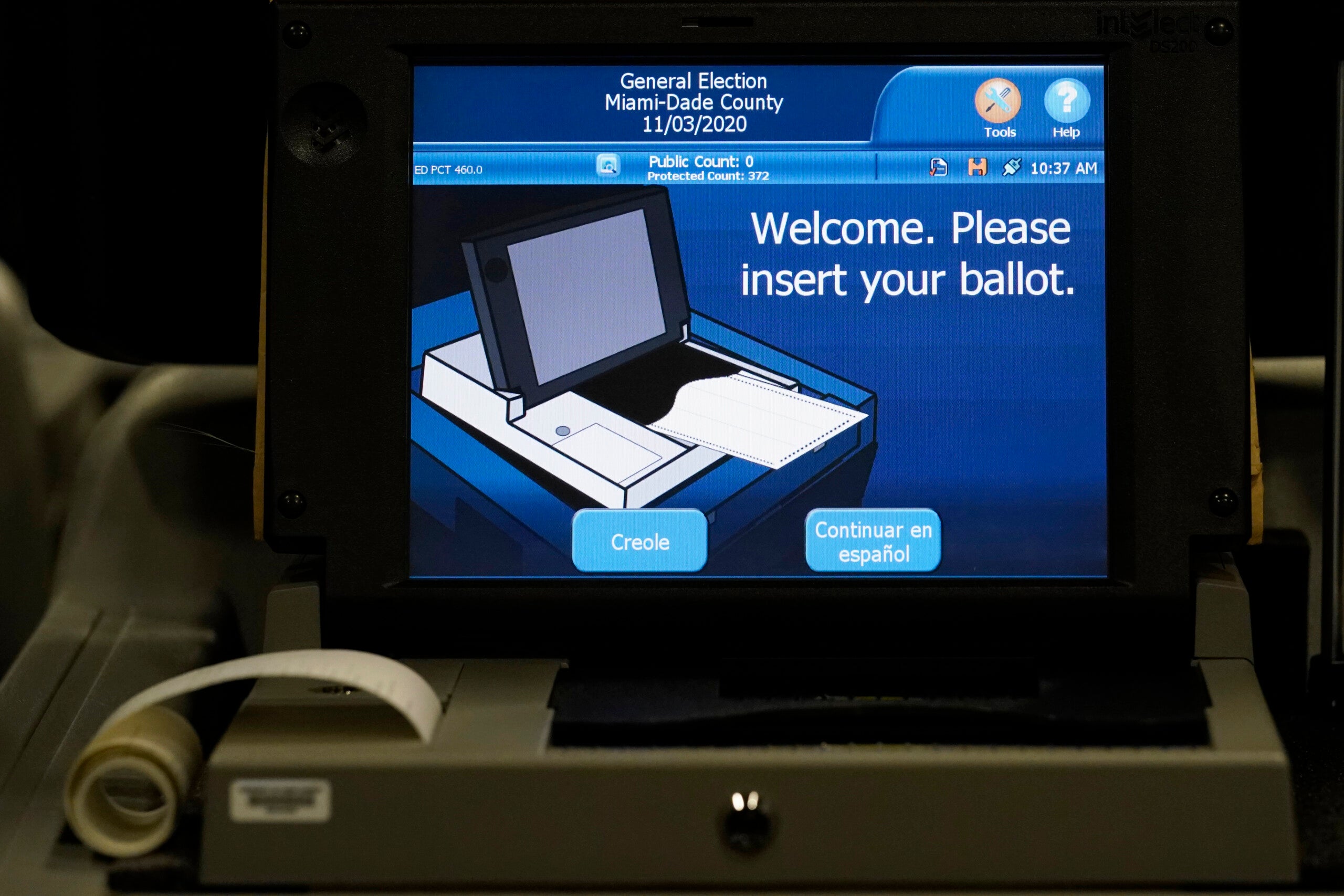 FILE - In this Oct. 14, 2020, file photo a ballot scanning machine is shown during a Logic and Accuracy Test of voting equipment that will be used in the general election on Nov. 3, at the Miami-Dade County Elections Department in Doral, Fla. The Cybersecurity and Infrastructure Agency, which President Donald Trump signed into existence in 2018, is working with other parts of the government to safeguard an election in the middle of a pandemic. (AP Photo/Lynne Sladky, File)
by: Associated Press
Posted: Nov 3, 2020 / 10:29 AM EST / Updated: Nov 3, 2020 / 10:29 AM EST

WASHINGTON (AP) — The Latest on the presidential campaign (all times local):

Federal authorities are monitoring voting and any threats to the election across the country at an operations center just outside Washington, D.C., run by the cyber-security component of the Department of Homeland Security. Officials there said there were no major problems detected early Tuesday but urged the public to be wary and patient.

U.S. Cybersecurity and Infrastructure Security Agency director Christopher Krebs said from the center there was “some early indication of system disruption,” but he did not elaborate. He says he has “confidence that the vote is secure, the count is secure and the results will be secure.”

Krebs says officials have seen attempts by foreign actors “to interfere in the 2020 election.” But he says officials “have addressed those threats quickly” and “comprehensively.”

Krebs says Election Day “in some sense is half-time.” He says, “There may be other events or activities or efforts to interfere and undermine confidence in the election.” He asks all Americans “to treat all sensational and unverified claims with skepticism and remember technology sometimes fails.”

HERE’S WHAT YOU NEED TO KNOW ABOUT THE PRESIDENTIAL RACE:

After a campaign marked by rancor and fear, Americans on Tuesday decide between President Donald Trump and Democrat Joe Biden.

— It’s here: What to watch on Election Day in America

For Joe Biden, it all comes down to Pennsylvania.

Biden is spending Election Day campaigning in his hometown of Scranton and in Philadelphia. He will meet with voters in each city.

Pennsylvania is key to Biden’s White House hopes. While his aides say he has multiple paths to nab 270 Electoral College votes, his easiest is by winning Michigan, Wisconsin and Pennsylvania. Biden has campaigned in the Keystone State more than any other.

The cities Biden is visiting Tuesday hold both strategic and symbolic significance: Biden has made his working-class upbringing in Scranton a centerpiece of his campaign, framing his economic pitch from the perspective of Scranton versus Wall Street, as he seeks to win back the blue-collar voters who helped deliver Donald Trump a win in 2016. Philadelphia has been the backdrop for some of Biden’s most significant speeches, and he’ll need strong turnout in the heavily democratic area, particularly among Black voters.

While boarding his flight on Tuesday morning, Biden tossed a thumbs up to the traveling press and said he was feeling “good.”

President Donald Trump says he believes his large rally crowds during his fast-paced weeks of campaigning are the “ultimate poll” and translate into a lot of votes for his reelection.

Trump told Fox News Channel’s “Fox & Friends” on Tuesday he will spend Election Day making phone calls to people who have been loyal to him and will go to his campaign headquarters in suburban Virginia to thank the staff.

Trump said he would declare himself the winner of the election “Only when there’s victory.” There has been concern that Trump will declare victory early — before vote counts are definitive. But the Republican president told Fox there’s no reason to “play games.” He says he thinks he has a “very solid chance at winning.”

Trump also says he understands why businesses are boarding up their storefronts but thinks it’s very sad they feel the need to do it. He predicts that if there is violence and unrest, it will be in Democratically run cities like Chicago; New York; Portland, Oregon; Oakland, California; and Baltimore and blames “weak leadership.”

Joe Biden has started Election Day with a visit to church — and the grave of his late son, Beau.

Biden and his wife, Jill, made an early morning stop at St. Joseph’s on the Brandywine in Wilmington, Delaware, the church he typically visits on Sunday when home. Biden had granddaughters Finnegan and Natalie in tow Tuesday.

After a brief church visit, the four walked to Beau Biden’s grave in the church cemetery.

Beau died of brain cancer in 2015, and Biden often speaks on the campaign trail of his courage while deployed to Iraq as a major in the Delaware Army National Guard.

Biden’s late wife, Neilia, and infant daughter, Naomi, died in a car crash in 1972, shortly after Biden was elected senator. They are also buried in the cemetery.

Biden is spending the rest of his day in Pennsylvania as he makes a final push to get out the vote.