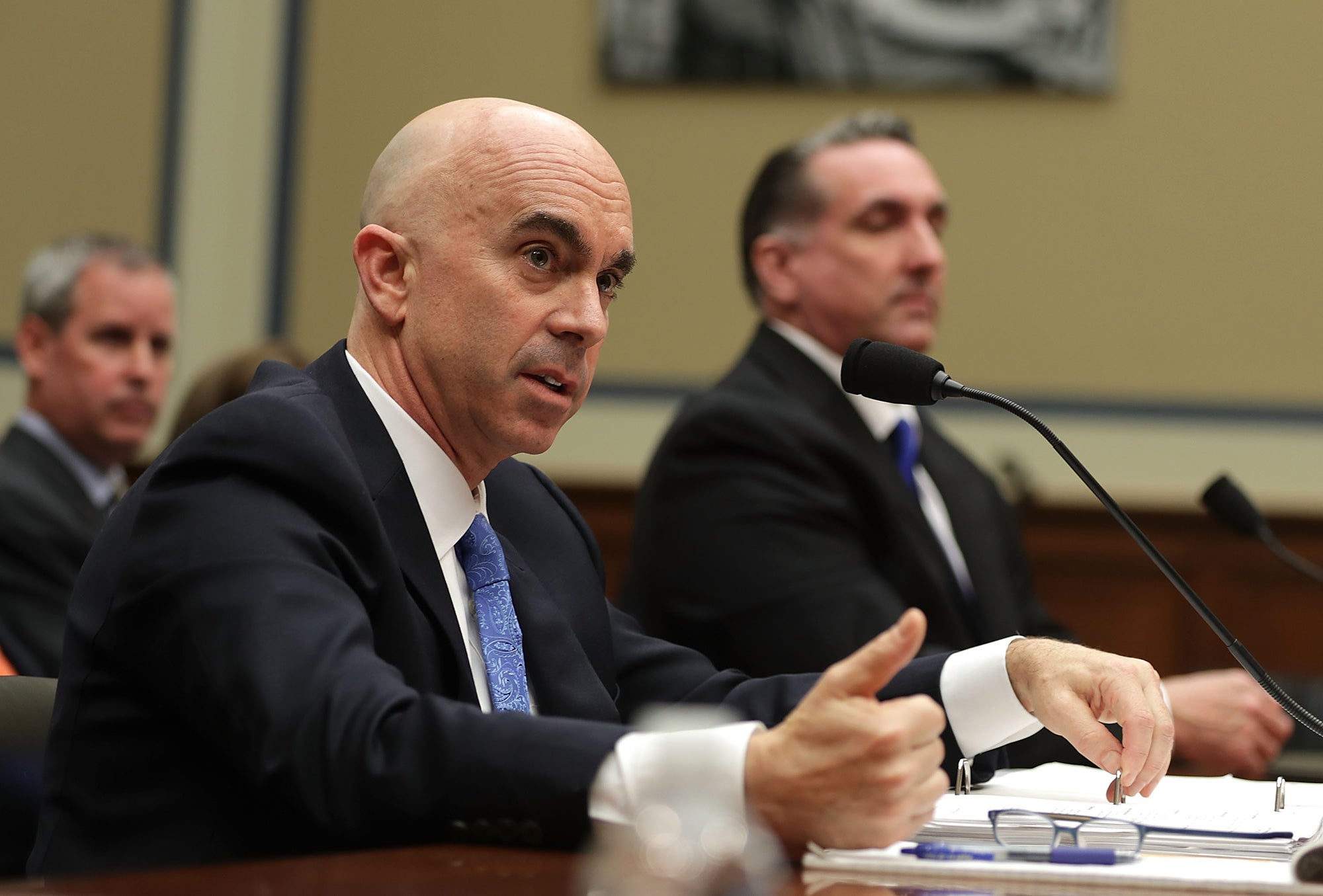 (CNN) — The State Department Inspector General who was fired by President Donald Trump before he could complete investigations into Secretary of State Mike Pompeo and his office was carrying out five probes into potential wrongdoing, three more than were previously known, according to a transcript released by Congress Wednesday.

Steve Linick told senior State Department officials about at least two of the probes but did not tell them to hide that information from Pompeo himself, according to the transcript.

Linick told Democratic and Republican lawmakers and select staff from the House Foreign Affairs and House Oversight committees, and Democrats from the Senate Foreign Relations Committee, that his office had been reviewing allegations that Pompeo and his wife may have used resources inappropriately.

“I wanted to make sure everybody was aware so that they wouldn’t be surprised,” Linick said when asked if he told the officials specifically so that Pompeo would be aware. “And I didn’t tell them not to tell anybody, including Secretary Pompeo, about them. There was no—from my point of view, I just wanted to make sure that folks on the seventh floor knew what we were doing before they just got a document request.” The seventh floor is where Pompeo and his closest staff have their offices.

Pompeo recommended that Trump fire Linick, who was jettisoned on May 15. The veteran inspector general testified before the committee June 3, telling lawmakers of attempts by a close Pompeo aide to “bully” him and raising questions about the top US diplomat’s assertion that he didn’t know about Linick’s investigations.

In addition to investigating Pompeo’s potential misuse of taxpayer funds and reviewing his decision to expedite an $8 billion arms sale to Saudi Arabia, Linick told lawmakers his office was also looking into three other matters that “involved the Office of the Secretary in some way.”

These included an audit of Special Immigrant Visas, a review of the International Women of Courage Award and another review “involving individuals in the Office of the Protocol,” Linick said.

While Pompeo has said he had no way of knowing about any of Linick’s work, the former inspector general told lawmakers that he had informed Undersecretary Brian Bulatao — a friend of Pompeo’s from their days at West Point — and Deputy Secretary Steve Biegun about the investigations into Pompeo’s potential misuse of government funds and the Saudi arms sale.

Linick, who conducted the virtual interview with the committee members a little more than two weeks after his ouster, refused to speculate whether either senior official told Pompeo about the investigation into Pompeo’s use of government resources. The questioner, Democratic Rep. Ted Lieu of California had pointed out the close relationship between Bulatao and Pompeo.

“The whole point was not to surprise the seventh floor writ large, because they were going to get these document requests,” Linick said.

Pompeo has denied knowing about the ongoing investigations, saying he would have had no way to be informed about the work of the Office of the Inspector General, and has used that rational to deny that he fired Linick in retaliation for the probes.

Linick also told lawmakers he had informed Pompeo’s top aides he was investigating whether Pompeo unlawfully circumvented Congress by declaring an emergency in order to sell billions of dollars in weapons to Saudi Arabia and other nations.

Linick told the lawmakers that Bulatao had questioned his mandate to investigate the arms deal and when Linick explained that inspectors general have the right to investigate how policy is implemented, Bulatao “just continued to push back.”

Pompeo expedited the arms deal to Saudi Arabia over deep objections from Congress, where lawmakers were furious about the kingdom’s murder of Washington Post journalist Jamal Khashoggi and the civilian death toll in the Saudi war against Iran-backed Houthi rebels in Yemen. Trump has repeatedly stressed the financial benefits of remaining close to Saudi Arabia, making the oil-rich nation a central focus of his Mideast foreign policy.

Bulatao “strenuously objected to our doing work on a policy matter. I don’t really understand—I can’t tell you what was in his mind,” Linick said. “I can only tell you that that’s what he said. And in response to that, I cited the Foreign Service Act, which requires us to review implementation of policy, not to judge whether it’s a good policy or a bad policy, which does not concern me one bit, but whether or not the policy is being carried out in accordance with the regs—the regulations and the law.”

Linick told the lawmakers that State Department officials got “some type of briefing” on his probe into the $8 billion arms sale to Saudi Arabia before he was fired.

Linick also said that he was fired a week and a day after the House Foreign Affairs Committee had reached out to his office to ask about the status of the arms sale investigation.

Pompeo refused to sit for an interview for that investigation, Linick told the lawmakers. “I had told Undersecretary Bulatao and Deputy Secretary Biegun and the legal adviser about this request, and, in assessing my request, they asked for, sort of, the topic areas for the interview, just the broad-brush topics, which we provided,” Linick said.

Speaking of Pompeo, Linick said, “and then, ultimately, as he acknowledged in the press, he sent written responses to that question and, at that time, did not agree to the interview.”

Linick had wanted to conduct that interview with Pompeo with other members of the IG team present as witnesses, but State Department officials proposed that only Linick be present.

Linick said of working with Bulatao “that sometimes the relationship was professional; at other times, he tried to bully me.” Later, Linick clarified that Bulatao “attempted to bully me.”

Linick also said of Bulatao that “sometimes I felt he was unfamiliar with the role of inspectors general,” adding that the under secretary “seemed surprised” when Linick told him “that IGs are nonpartisan and typically stay through the change of administration.”

Linick also offered another example of Bulatao’s apparent misunderstanding of the role of an independent IG, pointing to the under secretary’s request that Linick “help design the department’s response to Covid-19.”

Linick said Bulatao asked him to join an effort “to help design the Department’s response to Covid-19, the Diplomacy Strong program. And I did advise him that that wouldn’t be appropriate for me to do that because we may be auditing the Department’s efforts to address Covid-19.”

Linick explained that IGs are prohibited from “engaging in programmatic activity under the Inspector General Act” — meaning they can’t help make policy or design programs — because they may eventually need to audit those programs.

Linick testified that Bulatao said “okay” when Linick turned him down on the Covid-19 project. But in a Fox interview at the end of May, Pompeo said one of the reasons he suggested Linick’s removal was because they asked him “to be a part of a team to protect his own officers from Covid-19,” but “he refused to be an active participant.”

Pompeo has been evasive and vague about the specific reasons he recommended Trump fire Linick but has said he should have done so sooner.

“He was acting in a way that was deeply inconsistent with what the State Department was trying to do. His office was leaking information,” Pompeo claimed in an interview with Laura Ingraham on Fox News. “He was investigating policies he simply didn’t like.”

It is unclear which policies Pompeo was referring to in his assertion.

Linick told lawmakers he was “shocked” when he found out he was being fired, that his removal came without any warning from Trump or Pompeo. Democratic lawmakers said in a statement that Linick believed “the Administration’s after-the-fact justifications are ‘either misplaced or unfounded.'”

Since early April, Trump has removed five inspectors general from their positions, installing candidates of his choosing at the Intelligence Community, the Defense Department, the State Department, the Transportation Department and the Department of Health and Human Services.