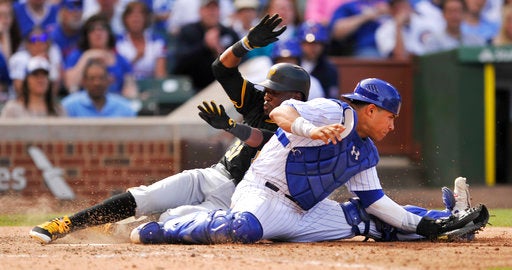 CHICAGO (AP) – Adam Frazier homered and the Pittsburgh Pirates scored six runs in the final two innings to beat the Chicago Cubs 6-1 Sunday for a three-game sweep of the World Series champions.

The Pirates went just 4-14 against the Cubs last year, including 1-8 at Wrigley Field. Pittsburgh’s previous three-game sweep at Wrigley was in September 2014.

Cubs starter Jon Lester pitched three-hit ball for seven innings and left with a 1-0 lead. The Pirates scored three times in the eighth off Koji Uehara (0-1), getting the go-ahead run when pinch runner Alec Hanson slid home on a bases-loaded grounder – a replay review upheld the call that catcher Willson Contreras was barely off the plate when he caught a throw on an attempted force play.

Frazier hit a three-run homer in the ninth.

Jameson Taillon (1-0) allowed an unearned run and struck out six in seven innings.