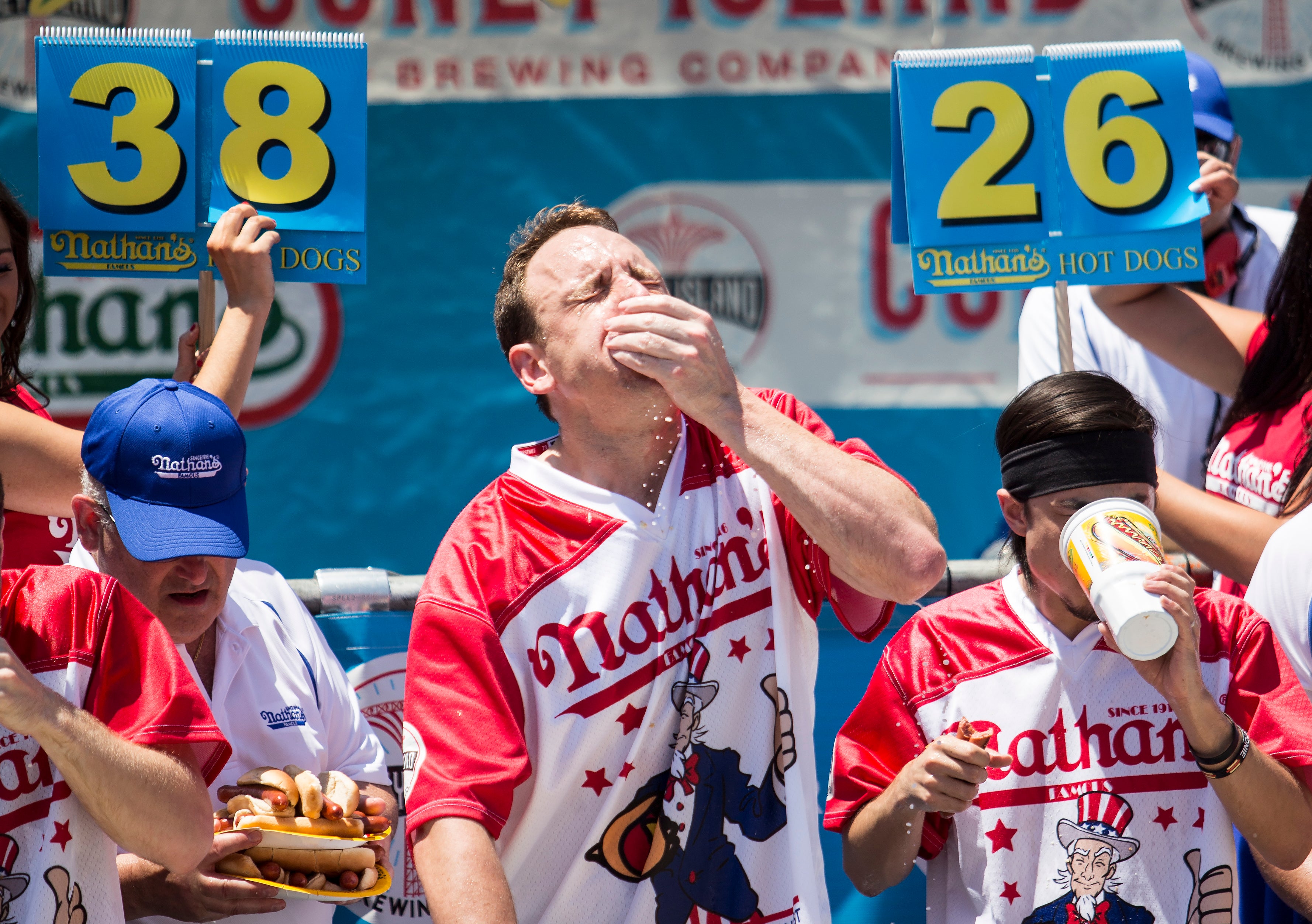 (CNN) — Bettors with the stomach for it can now legally put up their money to see how many hot dogs Joey Chestnut will take down.

For the first time ever, wagering on the iconic July Fourth Nathan’s Famous Hot Dog Eating Contest is on the table for US sportsbooks. The event has long been a favorite offshore, but with three states — New Jersey, Colorado, and New Hampshire — serving up their approval the 2020 offering figures to be one gamblers will relish.

“ESPN had already affirmed us as a sport in the early 2000s,” Major League Eating president Rich Shea said, according to Bleacher Report. “But, with legal betting, we are really now as legitimate as the NFL and the NBA.”

Chestnut, a 13-time champion, has been installed as a -1000 favorite (an $1,000 bet wins $100) by Draft Kings. The gambling website, which partnered with Major League Eating for the event, puts Chestnut’s over/under at 72.5 franks. A year ago Chestnut scarfed down 71 hot dogs and buns, and he owns the all-time mark of 74, a tally he totaled in 2018.

The eating star admitted seeing the odds was a strange new factor in the competition, tweeting, “It’s weird to look at betting odds and seeing predictions about my performance.”

“The Nathan’s Famous Fourth of July International Hot Dog Eating Contest is an iconic U.S. tradition that personifies American competition,” said Ezra Kucharz, chief business officer of DraftKings, in a press release. “We are proud to have partnered with Major League Eating to offer people everywhere the opportunity to engage with such a classic event.”

According to the New Jersey Division of Gaming Enforcement, wagers will be offered “pre-event and shall cease immediately prior to the event starting.” Additionally, bets will be limited to the event itself, meaning gamblers will not be permitted to wager on “non-event type bets, like the color of someone’s clothing or the weather.”

The annual event is traditionally held on Brooklyn’s Coney Island, at Nathan’s famed flagship restaurant. But due to Covid-19 the 2020 edition will take place at an undisclosed dining locale, with social distancing measures in place.

And the pandemic may further tilt the hot dog platters in Chestnut’s favor, as his primary challenger — and the only man to outeat him, Matt Stonie — is sidelined in California as a result of travel restrictions. (Chestnut is also a California resident, but navigated his way to New York before self-quarantining rules went into effect.)

In 2015, Stonie shocked the competitive eating world, out-gobbling Chestnut to the tune of 62 hotdogs to 60.

Nick Wehry, who is ranked 8th, will “dine in his stead,” Major League Eating announced.

On the women’s side, six-time defending champ Miki Sudo will resume her seat at the table, and has been installed as a heavy -500 favorite. Gamblers will also be able to dig into additional side bets, including wagering on whether there will be an eat-off in the event of a tie.

Experts estimate up to $1 million is wagered on the Nathan’s nibblers each July; legalizing the betting suggests that figure will inflate like the stomachs of the world’s best eaters.

Nathan’s Famous said it would donate 100,000 hot dogs to the Food Bank for New York City before the event, as it has in years prior. But this year the contest will also be dedicated to raising both money and awareness for food banks nationwide. The hot dog company also said the contest would honor essential workers, “who continue to serve the public despite risks to themselves during this pandemic.”