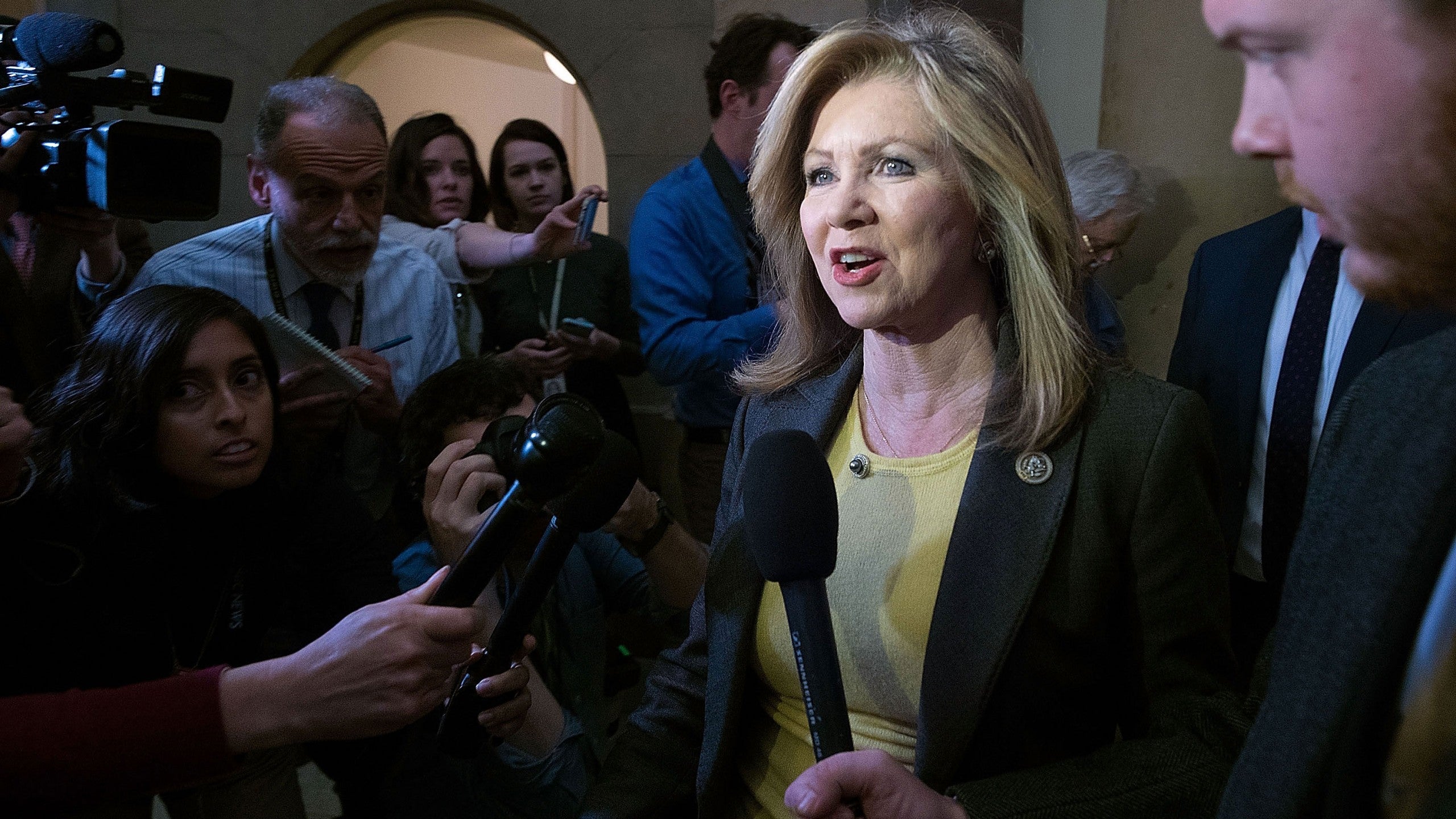 WASHINGTON, DC - MARCH 23: Rep. Marsha Blackburn (R-TN) is surrounded by reporters after leaving the office of Speaker of the House Paul Ryan (R-WI) at the U.S. Capitol March 23, 2017 in Washington, DC. Ryan and House GOP leaders postponed a vote on the American Health Care Act after it became apparent they did not have enough votes to pass the legislation that would repeal and replace Obamacare. (Photo by Chip Somodevilla/Getty Images via CNN)
by: Manu Raju, CNN Chief Congressional Correspondent
Posted: Mar 27, 2021 / 06:26 AM EST / Updated: Mar 27, 2021 / 06:26 AM EST

(CNN) — It was Thursday afternoon before a Senate recess was about to begin, and senators were in a hurry — especially Marsha Blackburn.

As senators bolted from the chamber after the week’s final vote to catch their afternoon flights, the Tennessee Republican hopped in a waiting car along with an aide and made her way down Constitution Avenue. But the car was pulled over by US Capitol Police.

Blackburn then jumped out of the car, identified herself as a senator and showed the officer her congressional pin, according to a text message and a source familiar with the matter. The officer then let the car go.

US Capitol Police says it has no record of the incident, yet the senator’s office later confirmed the account and said it was the police asking for her identification. Her office said she was a passenger when the car was pulled over.

CNN’s account of the incident is based on a text message from one of her aides and two other sources who have been told about the matter.

Leo Kowalski, an aide to Blackburn, told his friends that after being pulled over, the senator “hopped out, flashed her pin, hopped back in the car [and] said ‘drive!'”

“Officer didn’t say a word, just shook his head,” the aide said in a text message, which was reviewed by CNN.

One source familiar with the account told CNN that Blackburn identified herself as a senator and was allowed to leave. The source added it’s unclear whether the responding officer made that call or was directed to let her go by a superior.

While minor traffic infractions are common for many Americans, legal experts say senators using the power of their office to get off the hook for a ticket could either run afoul of Senate ethics rules — or at least create the appearance of impropriety.

“Ethics applies to infractions large and small,” said Norm Eisen, who served as then-President Barack Obama’s special counsel and special assistant for ethics and government reform. “The whole idea of ethics is we are all the same. No one is above the law. That is one of the core principles. Here when you have a member fragrantly using of all things congressional insignia to get preferential treatment, that’s improper.”

Eisen added: “That is not what that badge is for: to be treated differently than any other American motorist.”

Kowalski didn’t respond to multiple messages about the incident, and neither did a spokesperson until after CNN’s story published.

“While en-route to the airport to fly to Memphis for constituent meetings, Sen. Blackburn’s driver was pulled over,” a Blackburn spokesperson said in a statement. “The police officer asked the Senator for identification, which she provided, and then proceeded to the airport.”

Yet the Capitol Police said it had no records of the incident — and wouldn’t explain why not.

Asked for comment on the decision to let Blackburn go after she flashed her pin, a US Capitol Police spokesperson said there was no record of the incident and declined to comment further.

“There’s no record of USCP making a stop at the location on the day listed,” a spokesperson said.

One Capitol Police source said Blackburn’s behavior is not unusual for senators.

The Capitol Police has received criticism in the past for giving preferential treatment to members of Congress. In 2006, after then Democratic Rep. Patrick Kennedy crashed his Ford Mustang convertible into a traffic barrier on Capitol Hill, the police responding to the early-morning incident did not give him a sobriety test. He denied consuming alcohol prior to the incident but said he was taking sleeping medication.

Thursday turned out to be a hectic day for many senators racing to catch their afternoon flights ahead of the spring recess. On most Thursdays, the Senate finishes its last votes for the week around 1:45 p.m. ET, allowing senators to catch mid-afternoon flights, typically out of Reagan Washington National Airport.

But this past Thursday, the votes extended until later in the day, with senators literally running out of the chamber around 3 p.m. ET, after casting their final vote.

“Make a hole!” said Republican Sen. Richard Burr of North Carolina, who was darting out of the chamber and trying to get through a crowd standing in front of the double doors on the Senate’s second floor.

The Constitution’s speech or debate clause immunizes House and Senate lawmakers from arrest as they arrive and leave session. But Stan Brand, a longtime ethics lawyer in Washington, says “it’s a live issue” about how far that clause goes in protecting lawmakers’ conduct.

“I don’t see it as a major offense against the rules,” Brand said of Blackburn’s behavior. “I think it’s more of an optical issue because it looks like legislators are throwing their weight around and acting like they’re privileged.”