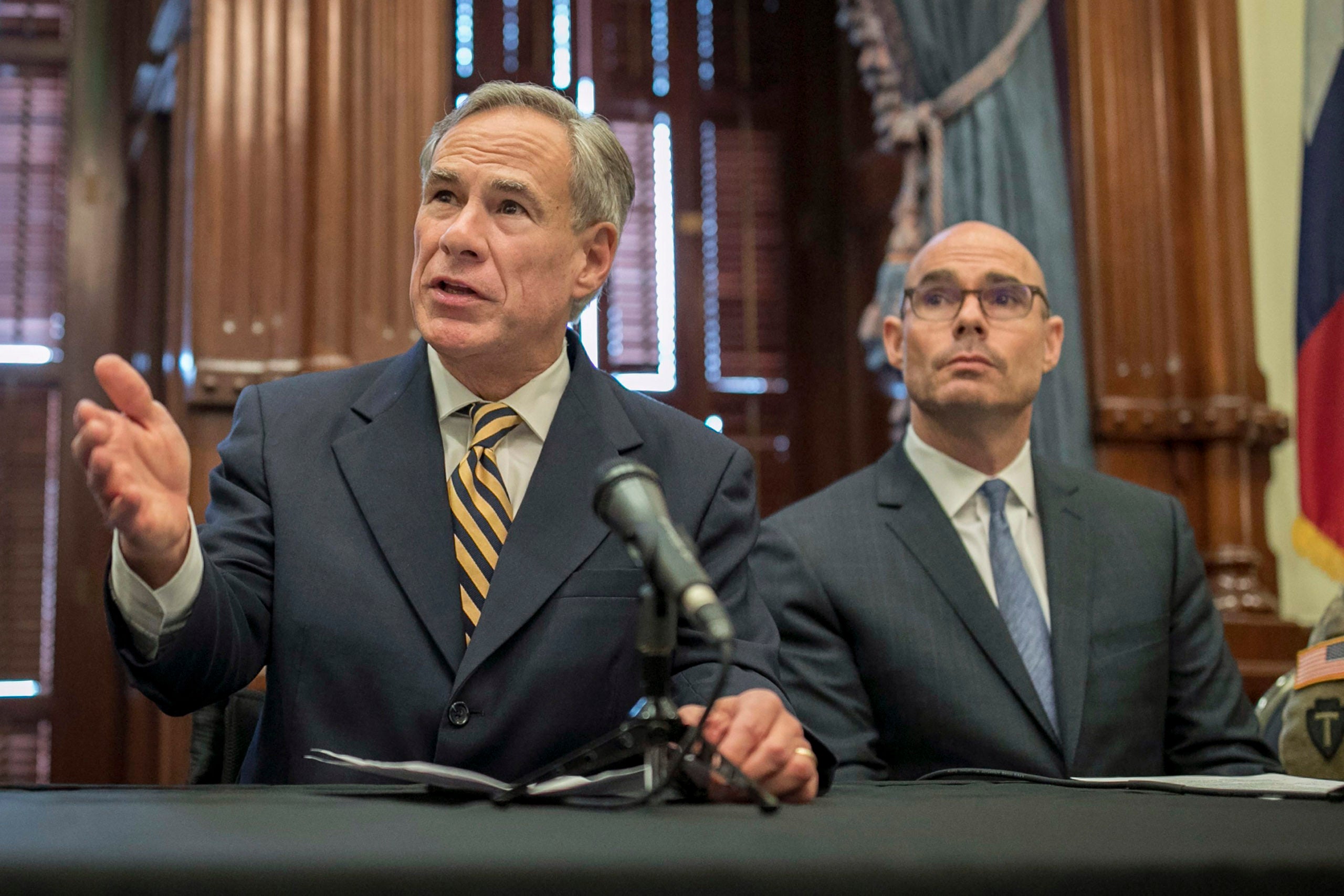 FILE - In this June 21, 2019 file photo, Gov. Greg Abbott, left, speaks at a news conference at the Capitol, in Austin, Texas. Abbott says the state will reject the re-settlement of new refugees, becoming the first state known to do so under a recent Trump administration order. In a letter released Friday, Jan, 10, 2020, Abbott wrote that Texas "has been left by Congress to deal with disproportionate migration issues resulting from a broken federal immigration system." He added that Texas, which typically takes in thousands of refugees each year, has done "more than its share." Governors in 42 other states have said they will consent to allowing in more refugees, according to the Lutheran Immigration and Refugee Service.(Jay Janner/Austin American-Statesman via AP, File)
by: ACACIA CORONADO, Report for America/Associated Press
Posted: Oct 1, 2020 / 09:25 PM EST / Updated: Oct 2, 2020 / 03:14 PM EST

The lawsuit filed late Thursday could be the first of many legal challenges against Abbott’s order that assigns just one drop-off location in each of Texas’ 254 counties and allows poll watchers to observe ballot deliveries. The order, which took effect Friday, shutters dozens of sites statewide, including in Texas’ largest cities and Democratic strongholds.

The Republican governor said the order is needed to ensure election security — echoing calls from President Donald Trump for his supporters to keep close watch on mail-in voting, but Democrats blasted it as blatant voter suppression.

Harris County Clerk Chris Hollins, who is named in the lawsuit, said during a news conference Friday that Abbott’s move would force elderly and disabled people to drive long distances and wait in long lines to cast their ballot. He said he, too, would fight Abbott’s order.

“It’s something he should strongly reconsider and if he doesn’t reconsider himself he is going to hear about it in the courts,” Hollins said of Abbott.

Hollins is also named in a lawsuit from Abbott calling for the Harris County Clerk’s Office to stop plans to send mail ballot applications to the county’s more than 2 million registered voters.

Abbott’s staff said he was not limiting voting, pointing out that he has increased the period during which voters can submit their mail-in ballots in person to include anytime up to Election Day.

“The additional time provided for those who want to submit their mail-in ballot in person is sufficient to accommodate the limited number of people who have traditionally used that voting strategy,” the governor’s office said in a statement.

Prominent members of the state Republican Party sued Abbott in September seeking to halt a one-week extension of early voting.

Voters have already begun returning ballots for the November presidential election. Texas is one of just five states not allowing widespread mail-in voting this year. To qualify for a mail-in ballot, Texas voters must be: away from their county of residence on Election Day and during the early voting period; sick or disabled; confined in jail but otherwise eligible to vote; or 65 years old or more.

Polls also show much tighter races in Texas this year. Democrats could take over the state House of Representatives for the first time in two decades.

The U.S. Postal Service informed Texas in July that, given the state’s current mail ballot request deadline, some ballots may not be delivered to voters by Election Day, and that even if all ballots reached voters on time, there was a “significant risk” that completed ballots postmarked on or near Election Day would not be received by the state’s Nov. 4 deadline.

The Texas Secretary of State’s office has not responded to Associated Press requests for comment on its plans to ensure the timely delivery of ballots.