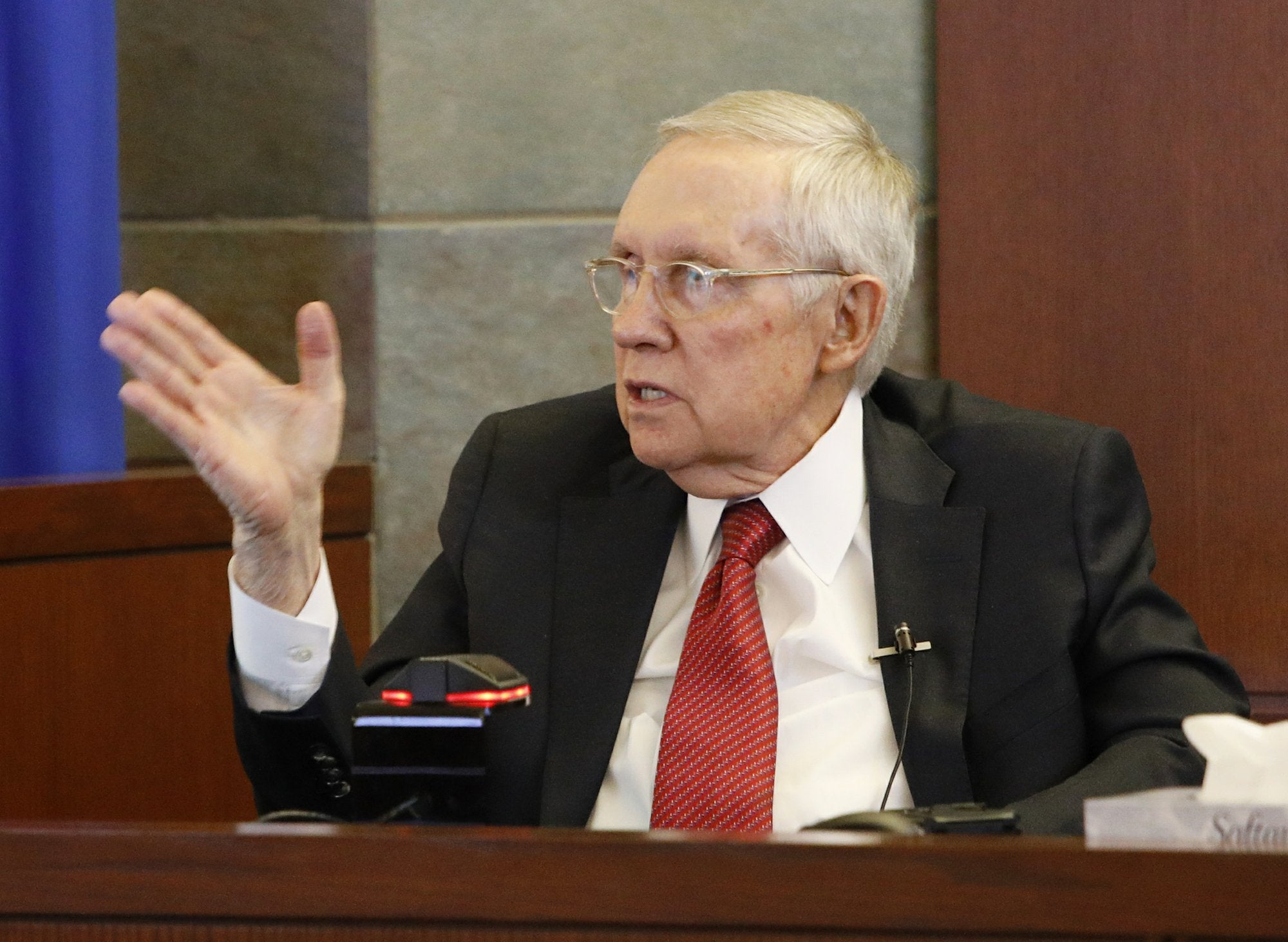 LAS VEGAS (AP) — Former U.S. Sen. Harry Reid told a Nevada jury Thursday that his career was cut short by injuries he suffered when a TheraBand exercise device slipped from his hand and he fell in his home bathroom in 2015.

From a wheelchair on the witness stand in a product liability lawsuit against Ohio-based device maker Hygenic Corp., the 79-year-old longtime Democratic leader covered half his face with his hand to indicate the bones he said were “smashed” when he spun around and fell against cabinets in his bathroom.

Despite surgeries, he said he has irreparable retina damage and can only distinguish light from dark in one eye.

“I hurt myself really bad,” he said. “I spun around. I can’t tell you more specifically. I hit the counter.”

Reid is suing the TheraBand maker for unspecified monetary damages, claiming civil negligence and failure to warn the public the elastic physical resistance band was “unreasonably dangerous,” particularly for the elderly like him. He is due to resume testimony on Friday.

“I knew I had to get out of the hospital as quick as I could and get back to Washington … to assure the Senate that I was OK and would be back,” Reid told the state court jury in Las Vegas. “At that time, I was not sure I could be. But I put up a good front.”

Reid said his eyesight loss hampered his depth perception and made reading difficult, and he later decided he couldn’t run for re-election in 2016.

Laurin Quiat, an attorney for TheraBand, has argued that Reid was misusing the flexible resistance band and the company isn’t at fault.

Reid hardened when questioned by Quiat about congressional Office of Attending Physician logs showing that for several months before his fall, therapy technicians instructed Reid how to use resistance bands to stay fit and improve his balance.

Reid had been hurt earlier when he fell while jogging.

Quiat waved a gray flat stretch of wide elastic band that he said was had been marketed safely for decades.

The former senator insisted his grip was strong but he now believes there should have been handles on the smooth flexible device that he had looped through a sturdy shower door in his bathroom. He said he was using it as resistance for a rowing exercise.

“All I know, if it had handles, it wouldn’t have slipped out of my hands,” he said.

“Because you wouldn’t have accidentally let go of the band with the handle as opposed to a band without handles?” Quiat asked. “Is that what you’re telling us?”

“If there were handles, it wouldn’t have slipped out of my hands,” Reid replied.

Reid testified in a wheelchair but explained that it wasn’t related to the TheraBand lawsuit.

Speaking with his characteristic breathy rasp, Reid said chemotherapy following surgery for pancreatic cancer affected vertebrae in his back, leading to additional surgeries. He said he’s now trying to regain the ability to walk.

“My pancreatic cancer is in remission,” Reid said. “But my posture is really gone. I can’t stand up.”