‘Hobbs & Shaw’ repeats at No. 1 against slew of newcomers 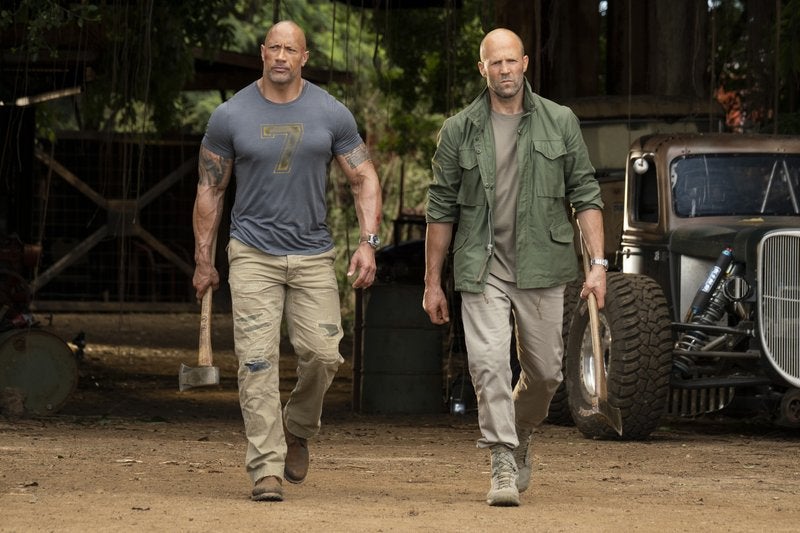 LOS ANGELES (AP) — Audiences helped the “Fast & Furious” spinoff “Hobbs & Shaw” take another lap at No. 1 even with an onslaught of four new major releases this weekend. From family films to R-rated adult fare, moviegoers had their pick as studios tried to capitalize on the waning days of summer. But although August can be a great opportunity for non-superhero films, it’s not a sure thing. And this weekend some, such as “Scary Stories to Tell in the Dark,” fared better than others, like the Melissa McCarthy and Tiffany Haddish mob thriller “The Kitchen.”

“There are always going to be casualties when there are this many openers,” said Paul Dergarabedian, the senior media analyst for box office tracker Comscore. “They cannot always be lined up in the top four rankings.”

Second place went to the PG-13 film “Scary Stories to Tell in the Dark,” from CBS Films and eOne Entertainment, which cut through the clutter with a better than expected $20.8 million. Lionsgate distributed the Guillermo del Toro-produced horror which had been tracking to open in the mid-teens.

“The filmmakers and the team at CBS Films are thrilled that moviegoers are embracing the world of ‘Scary Stories,’” del Toro said in a statement Sunday. “It’s particularly satisfying to see families experiencing the fun of the movie together.”

Good reviews helped raise its profile, although audiences were more underwhelmed after the fact, slapping it with a C CinemaScore.

Dergarabedian noted that, even with a PG-13 rating, horror movies once again prove to be, “a consistent draw at the box office.”

Close behind in third was “The Lion King” with $20 million in its fifth weekend in theaters. With $1.3 billion globally, it’s now surpassed “Beauty and the Beast” as Disney’s highest-grossing “live-action” release.

Newcomer “Dora and the Lost City of Gold,” from Paramount Pictures, found a healthy audience too, earning an estimated $17 million for a fourth place start. Starring Isabela Moner, “Dora,” based on the popular television series, also got good reviews from critics and audiences, who gave it an A CinemaScore.

And in fifth place, Quentin Tarantino’s star-vehicle “Once Upon a Time…in Hollywood” added $11.6 million and crossed the $100 million mark.

But not all the newcomers were so lucky. The dog owner tearjerker “The Art of Racing in the Rain,” with Milo Ventimiglia, opened in sixth place with $8.1 million. The Fox 2000 property was inherited by Disney in the takeover.

And the ’70s-set McCarthy and Haddish crime thriller “The Kitchen” flopped in seventh with only $5.5 million. Based on an obscure Vertigo comic, the film from first time director Andrea Berloff (an Oscar-nominated screenwriter) features both McCarthy and Haddish in more dramatic roles. But critics were not impressed: The film currently has a dismal 20% on Rotten Tomatoes and audiences also largely stayed away.

Warner Bros. distribution head Jeff Goldstein said that they were “very disappointed” with the results.

“I think that the filmmakers took a very bold approach to their choice with the movie and I think it just didn’t resonate with the viewers,” Goldstein said. “The good news is the movie was a fairly low-budgeted film.”

Audiences also had a slew of new limited releases to choose between: The BTS concert film “Bring the Soul: The Movie,” which earned $2.3 million from only 873 locations; “Brian Banks,” based on the real story of a false accusation that upends a promising football star’s life which debuted in 1,240 locations and earned $2.1 million; “The Peanut Butter Falcon,” with Shia LaBeouf and Dakota Johnson, which earned $205,236 from 17 locations; and “After the Wedding,” with Michelle Williams and Julianne Moore ($57,124 from five locations).

“Audiences are confounded by the number of newcomers,” Dergarabedian said. “There was so much overlap with all of these titles.”

But the marketplace is already looking ahead to the fall and the release of “It Chapter Two.”

“It’s going to feel like summer in September when ‘It’ opens,” Dergarabedian said.