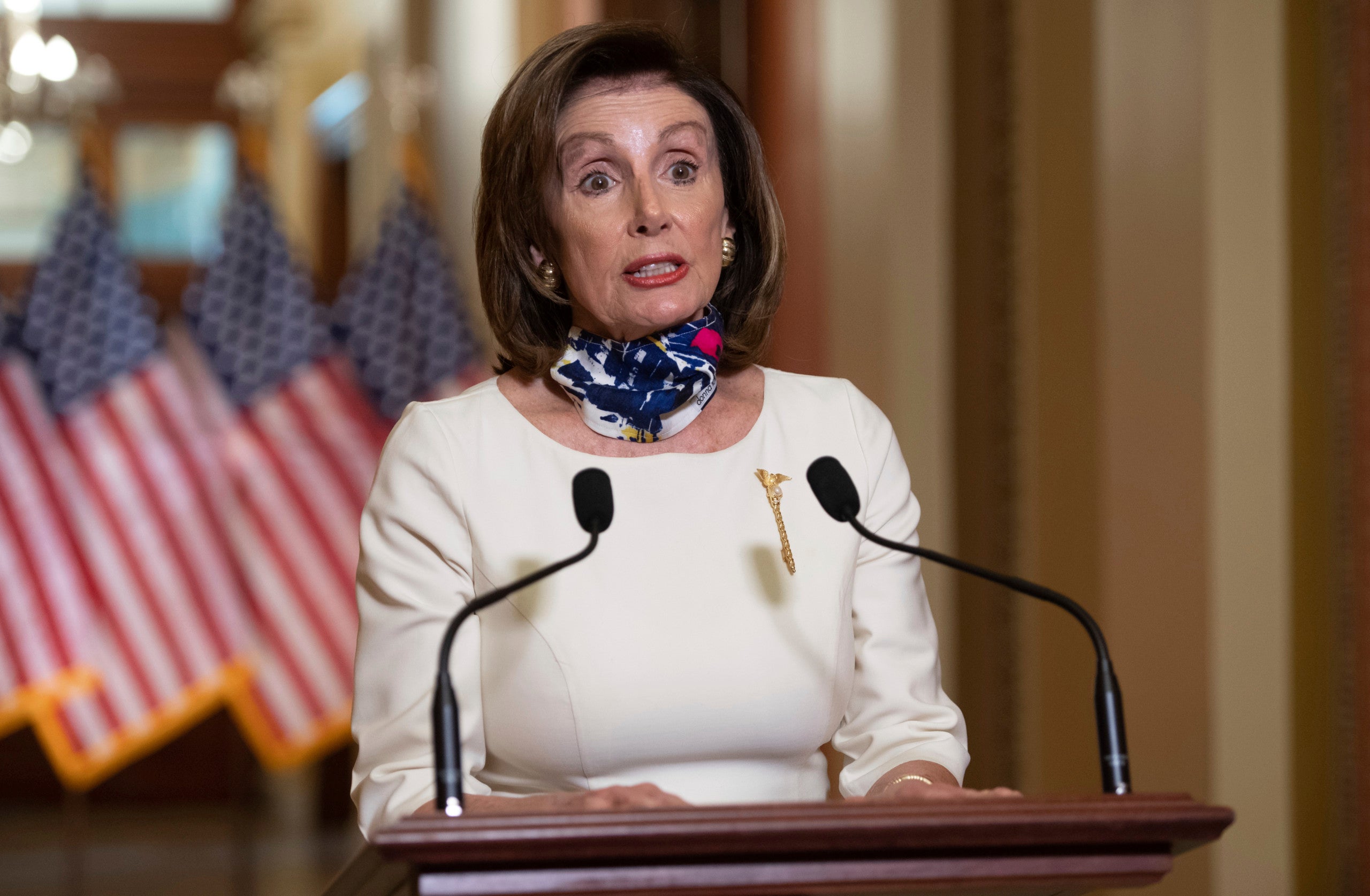 House Speaker Nancy Pelosi of Calif., speaks about the so-called Heroes Act, Tuesday, May 12, 2020 on Capitol Hill in Washington. Pelosi unveiled a more than $3 trillion coronavirus aid package Tuesday, providing nearly $1 trillion for states and cities, “hazard pay” for essential workers and a new round of cash payments to individuals. (Saul Loeb/Pool via AP)
by: Clare Foran, Haley Byrd and Manu Raju, CNN
Posted: May 15, 2020 / 05:36 AM EST / Updated: Jun 2, 2020 / 08:41 AM EST

(CNN) — The House of Representatives will vote on Friday on a Covid-19 aid package with a price tag of more than $3 trillion and a historic rules change to allow lawmakers to vote remotely during the pandemic.

Democrats have argued that the sweeping aid package, which allocates funding for state and local governments, coronavirus testing and a new round of direct payments to Americans, is urgently needed to address the unfolding crisis. The legislation, which reflects Democratic priorities and was not a product of bipartisan negotiations, would stand as the largest relief package in US history.

House Speaker Nancy Pelosi, a California Democrat, defended the bill on Thursday against attacks that it is partisan, saying, “We’re putting our offer on the table. We’re open to negotiation.”

Republicans have criticized the rules change proposal to allow remote voting and remote committee work as a partisan power grab that will upend institutional tradition. Democratic leaders say remote voting by proxy will ensure lawmakers can continue to legislate safely and effectively during the pandemic.

In addition, most Republicans have dismissed the aid package as a liberal wish list and declared it dead on arrival in the Senate. They say it is too soon to move ahead with another far-reaching legislative response to the pandemic without first waiting to see the results of the trillions of dollars in aid that have already been enacted.

With the four previous coronavirus relief measures, House Democrats collaborated with Senate Republicans and the Trump administration to negotiate bipartisan agreements. But it remains unclear whether and when a bipartisan consensus can be reached on yet another package, despite the fact that the American public and US economy continue to feel the devastating impact of the disease.

Democratic leaders say that passing their own new relief passage, which they are calling the Heroes Act, serves as a way to outline their priorities for what should be next addressed as they attempt to put pressure on Republicans to move ahead with additional aid.

In addition to the criticism from Republicans, House Democratic leaders have faced resistance within their own ranks by both progressives and moderates.

Freshman Democratic Rep. Kendra Horn, a moderate who flipped an Oklahoma House seat from red to blue in 2018, came out in opposition to the measure on Thursday.

“Messaging bills without bipartisan support are a disservice to the American people, especially during a time of crisis,” she said in a statement. “This is not the time for partisan gamesmanship, this is the time to find common ground and deliver help where it is needed most.”

Rep. Elissa Slotkin, a freshman from Michigan in a swing district, told CNN on Thursday that she has “concerns” with the $3 trillion cost and said “I’m undecided” on whether she will vote for the plan on Friday.

The legislation would provide nearly $1 trillion for state and local governments, a $200 billion fund for essential worker hazard pay, an additional $75 billion for Covid-19 testing, tracing and isolation efforts, and a new round of direct payments to Americans of up to $6,000 per household, according to the House Appropriations Committee.

But the legislation unveiled earlier this week excluded certain provisions that progressives had pushed for, such as recurring monthly payments, prompting some progressive lawmakers to express frustration.

The leaders of the Congressional Progressive Caucus — Reps. Pramila Jayapal of Washington state and Mark Pocan of Wisconsin — sent a letter to Pelosi earlier this week asking for the vote to be delayed until next week to give them more time to review the plan.

But in a letter to House Democrats on Tuesday, Pelosi indicated she planned to press ahead with the Friday vote, asking members to “support the legislation and to be present on Friday.”

For some members, the Friday vote could be the last in-person vote they will attend for some time.

House Democrats’ move to allow remote voting comes after weeks of talks over the possibility of changing House rules to allow committees to conduct business virtually and members to vote while away from Washington during the pandemic. It will stand as one of the most significant rules changes the House has implemented in recent history.

The rules change would authorize temporary implementation of remote voting by proxy in the event of a public health emergency due to the coronavirus. It also allows for remote committee proceedings during the pandemic. Once enacted, the authorization for remote voting and remote committee work would remain in place for a 45-day period, after which it could be extended if the public health emergency persists.

Under the rules change, lawmakers who cannot or do not want to travel during the pandemic would be allowed to designate proxies by sending letters to the House clerk. Proxies will be required to “receive exact written instruction” from the members who are using them as proxies, according to the House Rules Committee.

Any given member can serve as a proxy only for up to 10 other lawmakers. Republicans had raised concerns with the initial proposal about the possibility of members casting an unlimited number of proxy votes for their colleagues.

The resolution also greenlights higher-tech options for remote voting in the future after a system is developed and certified, directing the chair of the House Administration Committee to study the feasibility of using technology to vote remotely in the House. House Majority Leader Steny Hoyer, a Democrat from Maryland, has suggested members could one day utilize technologies like FaceTime to call House clerks to cast their votes.

“Congress must act to save its ability to act,” Hoyer told reporters of the proxy voting rules change earlier this month. “We must provide a way to move forward effectively on behalf of the Constitution and the American people.”

As with prior House votes during the pandemic, lawmakers will be asked to adhere to social distancing protocols when they return to the chamber on Friday. Washington remains under a stay-at-home order, which was recently extended until June 8.

A notice sent to all members from the attending physician and sergeant-at-arms advises lawmakers to maintain 6 feet of social distance anytime they are in the Capitol. The use of face coverings is “strongly recommended” for members and staff during “any proceeding when it may be not possible to maintain” that amount of separation.

They also recommended that members avoid using elevators in the Capitol, which in normal circumstances become packed tight with lawmakers as members travel to and from the House floor for votes.

Voting will be conducted in alphabetical groups of roughly 72 members each to minimize the number of people on the House floor at any given time. Members will also be asked to exit the chamber floor quickly after they vote, to avoid large congregations and to allow voting to proceed as quickly as possible.