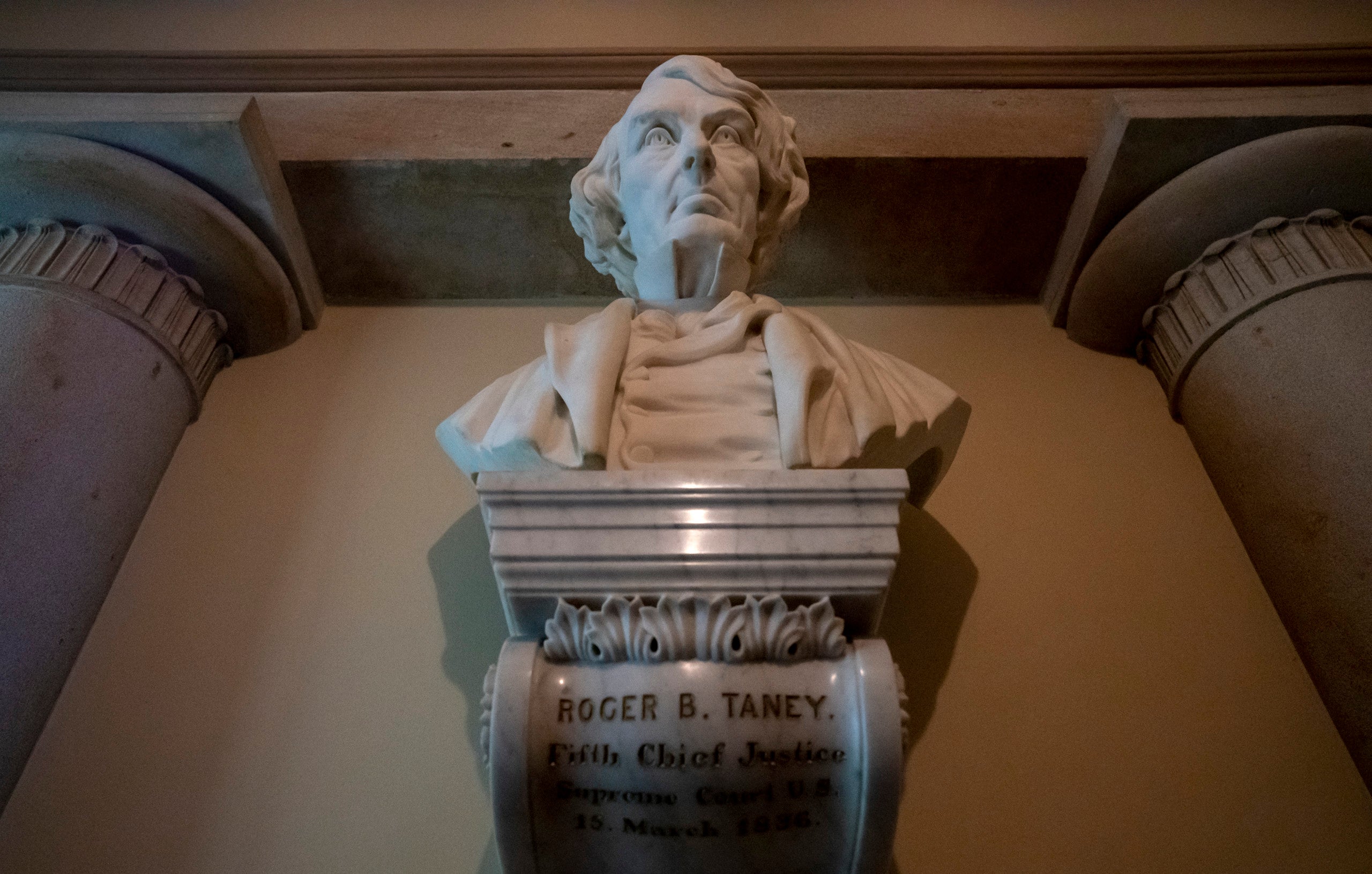 FILE - In this March 9, 2020, file photo a marble bust of Chief Justice Roger Taney is displayed in the Old Supreme Court Chamber in the U.S. Capitol in Washington. The House will vote Wednesday, July 22, on whether to remove from the U.S. Capitol a bust of Chief Justice Roger B. Taney, the author of the 1857 Dred Scott decision that declared African Americans couldn't be citizens. (AP Photo/J. Scott Applewhite, File)
by: Haley Byrd and Sunlen Serfaty, CNN
Posted: Jul 22, 2020 / 06:30 AM EST / Updated: Jul 22, 2020 / 06:30 AM EST

(CNN) — Lawmakers in the House are expected to vote on legislation Wednesday to expel Confederate statues from the US Capitol.

The bill requires the removal of statues of individuals who voluntarily served the Confederacy, as well as three statues of men who defended slavery, segregation and racism, from the complex.

The statues have come under fire before, but members of Congress have pushed with renewed urgency to address the matter in the wake of George Floyd’s death at the hands of Minneapolis police officers and mass protests against systemic racism across the United States.

The Senate also would have to pass the legislation for it to take effect. Republicans in that chamber have pushed back on congressional efforts to address the statues, saying states should make the decision.

Throughout the Capitol, there are a dozen statues honoring the likes of Jefferson Davis, who was president of the Confederacy, his vice president and Robert E. Lee.

Some depict the soldiers and generals wearing Confederate uniforms. A belt buckle on a statue of Joseph Wheeler, a general in the Confederate Army, is clearly marked with “CSA” for Confederate States of America.

Every state sends two statues of prominent residents to the Capitol as part of the National Statuary Hall Collection. Several states had already been making plans to swap out their statues.

Florida is taking down its statue of Confederate Gen. Edmund Kirby Smith and replacing it with civil rights leader Mary McLeod Bethune. Arkansas is pulling both of its controversial statues, swapping them for country singer Johnny Cash and civil rights leader Daisy Bates.

The bill scheduled for a House vote on Wednesday would also remove a bust of Chief Justice Roger B. Taney, who wrote the Dred Scott opinion declaring that African Americans could not be citizens of the US, from the old Supreme Court chamber.

“While the removal of Chief Justice Roger Brooke Taney’s bust from the United States Capitol does not relieve the Congress of the historical wrongs it committed to protect the institution of slavery, it expresses Congress’s recognition of one of the most notorious wrongs to have ever taken place in one of its rooms, that of Chief Justice Roger Brooke Taney’s Dred Scott v. Sandford decision,” the legislation states.