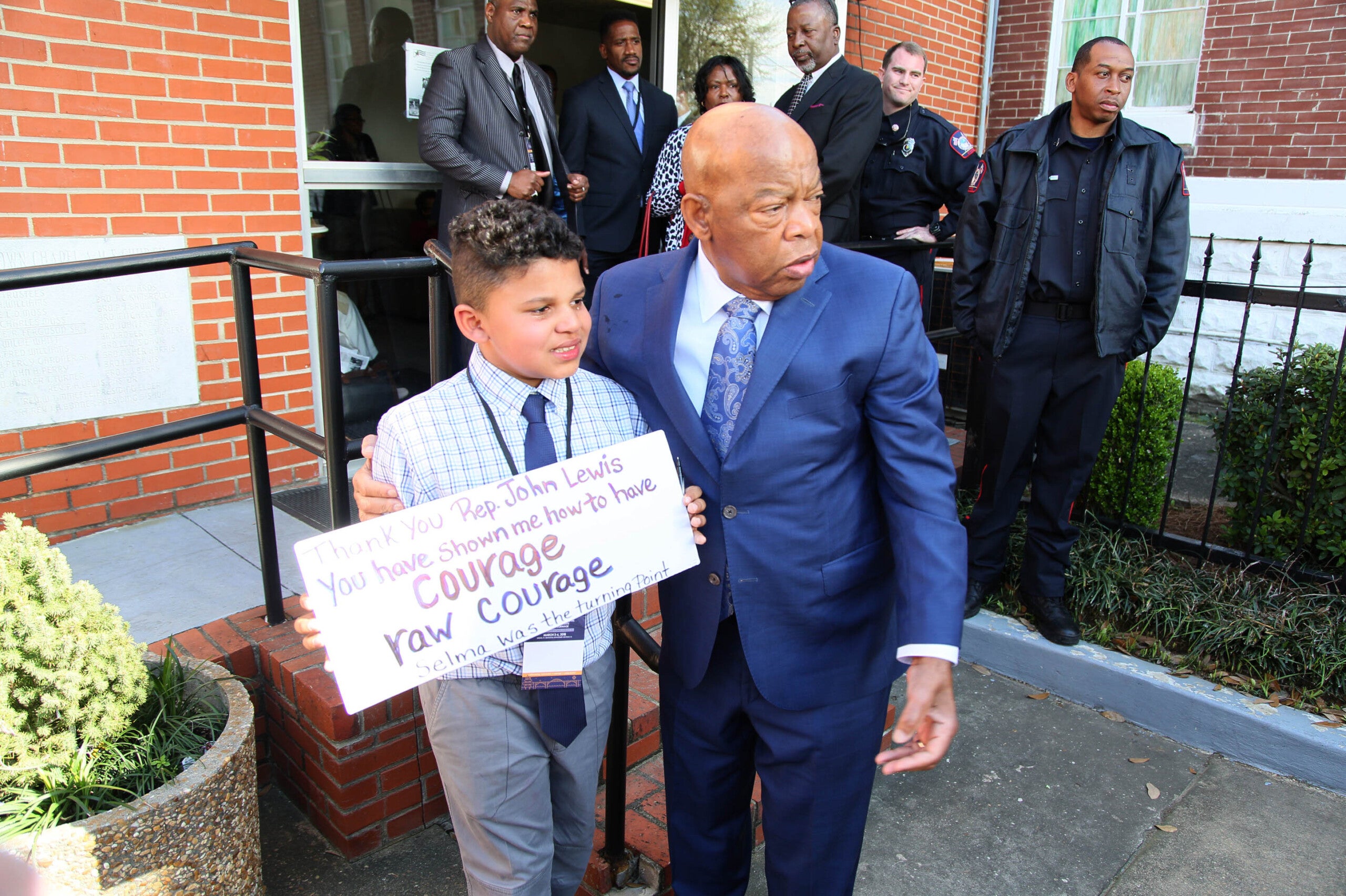 Rep. John Lewis organized a mission trip to Memphis, Birmingham, Montgomery and Selma on a pilgrimage that was set up through the Faith and Politics to bring awareness to the Civil Rights Journey --- Republicans, Dems, independents, children, and young adults would embark on a journey to learn about MLK (where he gave his last speech in Memphis) and the struggle for voting rights. (Provided Photo/Bridget Nolan and Rachel Smolkin via CNN)
by: Dana Bash, Jeremy Moorhead and Bridget Nolan, CNN
Posted: Jul 31, 2020 / 04:58 AM EST / Updated: Jul 31, 2020 / 04:58 AM EST

(CNN) — Before three US presidents, before the House speaker and other dignitaries, longtime friends and cohorts in “good trouble” took the pulpit at John Lewis’ funeral, a 12-year-old boy stood to recite the late congressman’s favorite poem, “Invictus.”

“In the fell clutch of circumstance

“I have not winced nor cried aloud.

“Under the bludgeonings of chance

“My head is bloody, but unbowed.”

That the Lewis family chose young Tybre, who met the man he calls his hero in Selma two years ago, to read a poem Lewis’ sister remembers her brother reading around the house was the embodiment of his legacy.

The words of the poem Lewis loved when he was Trybre’s age are almost a prophecy to the pain he endured as a leader in the civil rights movement.

“It matters not how strait the gate

“How charged with punishments the scroll

“I am the master of my fate

“I am the captain of my soul,” the poem concluded.

“John Lewis was my hero, my friend. Let’s honor him by getting in good trouble,” Tybre added, leaving the lectern trying to hold back his tears.

It was a fitting tribute for Lewis, who was always a champion of young people with passion, since he too was practically a child when he wrote Martin Luther King, Jr., saying he was inspired to change the world, and received a bus ticket in return.

“When historians pick up their pens to write the story of the 21st century, let them say that it was your generation who laid down the heavy burdens of hate at last and that peace finally triumphed over violence, aggression and war,” Lewis wrote in a powerful piece to be published the morning of his funeral.

Lewis clearly saw Tybre Faw as a special part of that next generation.

Tybre met his idol John Lewis in Selma, Alabama, in March of 2018. We were there covering the annual civil rights pilgrimage that Lewis led when we saw Tybre standing outside a church where Lewis was attending a service. He held a sign that read, “Thank you Rep. John Lewis. You have shown me how to have courage.”

When we talked to Tybre, we learned that he had asked his grandmothers to drive him seven hours from his Johnson City home to Selma in the hopes of meeting the man mentioned in the books about the civil rights movement that the boy regularly checked out from the library and devoured.

We connected Tybre and his grandmothers to Lewis’ staff and they brought him to the back entrance of the church where the congressman would be exiting.

Tybre’s eyes welled up with tears the minute he saw Lewis, who came over, read the sign and hugged him as he spoke quietly to the boy who hung on every word. None of us who witnessed the meeting could keep from crying. Even Capitol Police officers there — trained to be stoic — were unable to hold back their tears.

We sent him the original story from March 2018, which showed Tybre not only meeting Lewis, but marching with him across the Edmund Pettus Bridge in Selma and even going to Washington at Lewis’ invitation to spend time on the floor of House of Representatives, where Tybre decided he too wants to be a congressman one day.

Morris texted back after watching the story asking whether Tybre had a college fund, saying, “That boy has to be afforded the chance to be successful!”

The answer was no. Tybre is the only child of a single mother, whose grandmothers also play a big role in his upbringing.

Morris was put in touch with Annarino, Tybre’s grandmother, who cried when she got the call and agreed to let Morris start a college fund for their grandson. Morris put up a GoFundMe page for Tybre’s education.

In a lengthy post on that page, Morris wrote that Tybre is “a shining light in a dark time” and that “he wants to grow up and make a difference. He wants to be a congressman and follow in the footsteps of the late John Lewis.”

“We can’t afford this light to burn out before it has a chance to shine,” Morris added.

Tybre’s love of history — especially the civil rights movement — was born in third grade when his music teacher, Laura Evans, had her students put on a play about Martin Luther King Jr., who had gone to seminary school with her own father. She shared stories with her students that her father had told her about King.

After learning about King and other civil rights leaders, and then learning that Lewis was still alive, living in Atlanta and serving in Congress, Tybre asked his grandmothers to take him to Atlanta.

“Tybre asked, ‘Will you take me there so he can shake my hand?'” recalled Annarino.

The Atlanta trip didn’t work out, but they realized that Lewis would soon be making his annual visit to Selma to commemorate “Bloody Sunday,” the 1965 march for voting rights where Lewis was almost clubbed in the head to death by police while crossing the Edmund Pettus Bridge.

Tybre’s grandmothers agreed to take him to Selma, where his persistence and his grandmothers’ seven-hour drive paid off.

After meeting Lewis, and walking across the bridge with him that day in 2018, Tybre dove into activism, marching for everything from school safety to human rights to children at the border — all the while staying in touch with Lewis.

Tybre even joined Lewis later that year in Atlanta for the March for Our Lives.

But it was his two subsequent trips with Lewis on his civil rights pilgrimage in 2019 and this year — Lewis’ last — that cemented their magical friendship.

Tybre didn’t only return to Selma with Lewis, he attended the whole tour, which included other infamous sites like the 16th Street Baptist Church in Birmingham, Alabama, which the KKK bombed in 1963 and killed four little girls not much older than Tybre.

He asked his grandmothers to take him on other historical trips during his vacations — from Boston to see the Freedom Trail, to the Woolworth’s lunch counter in North Carolina where African Americans sat demanding service and equality.

On February 21, Tybre FaceTimed with Lewis to wish him a happy birthday.

The congressman had been diagnosed with advanced pancreatic cancer two months earlier, and it was unclear if he would make it to Selma in March, where Tybre already knew he would be.

Lewis did make what ended up being his final journey across the bridge, but people were largely kept away from the congressman because of his illness, so Tybre and his grandmothers didn’t think the two would connect.

But as Lewis was getting into his car to leave, the same Capitol Police officers who were there for the congressman’s first encounter with Tybre spotted him in the crowd, and brought him over to Lewis.

With the coronavirus already spreading and social distancing beginning, the two shared an elbow bump instead of a hug. It turned out to be the last time Tybre got to see his idol and mentor.

After Lewis died Friday, Tybre said “neither the world nor I will ever be the same after losing John Lewis — my heart hurts.”

“The first year I met John Lewis I never thought I’d have the opportunity to meet someone who had so much courage. I felt blessed to be there. Over the years, I had the chance with John Lewis to spread the word that our world can be better — to find a way to get in the way — get into good trouble. He will always be my hero.”