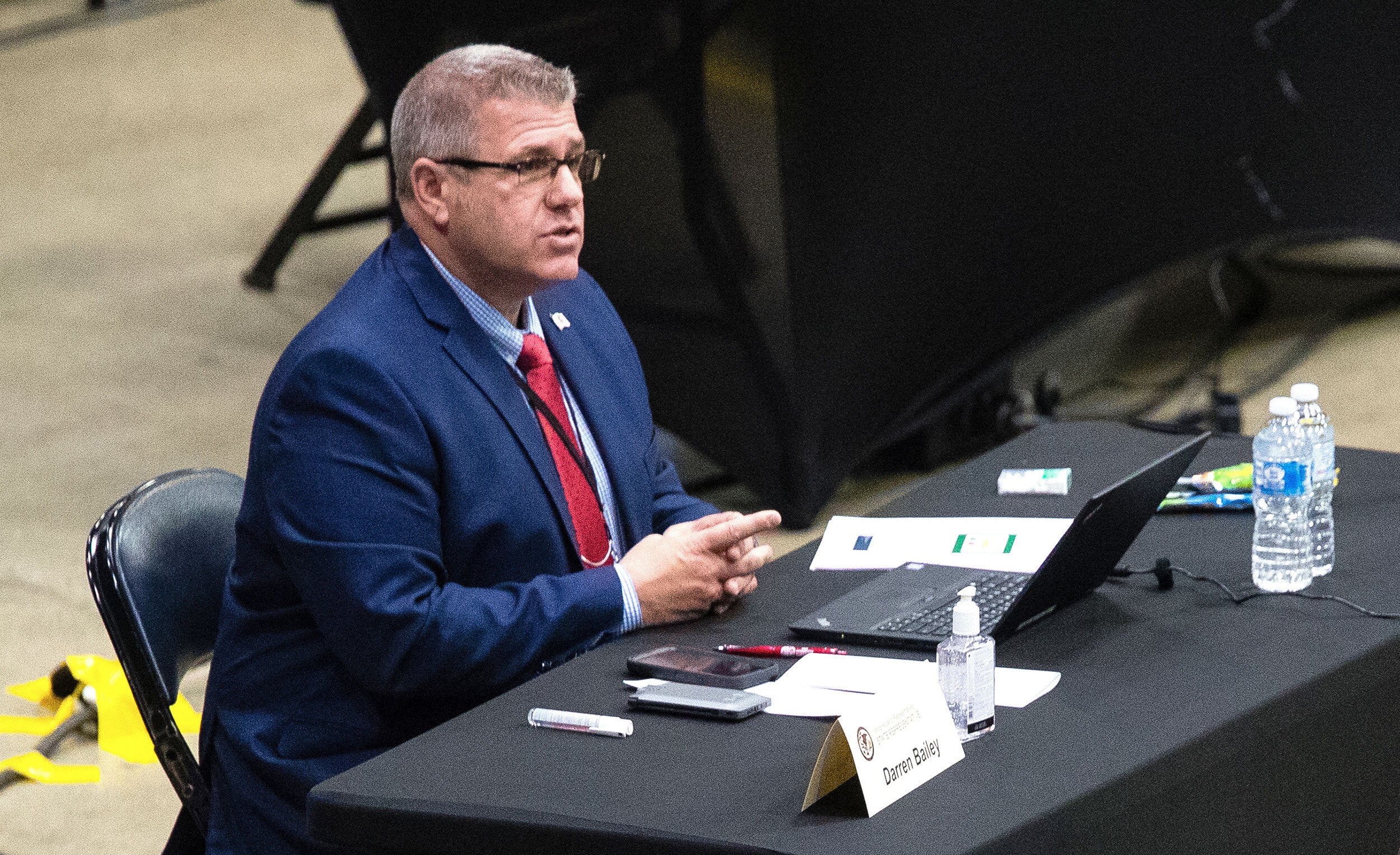 State Rep. Darren Bailey, R-Louisville, left, speaks with a colleague before session begins at the Bank of Springfield Center in Springfield, Ill., where the Illinois House of Representatives are preparing to conduct their spring session Wednesday, May 20, 2020. The legislators are gathering at the center instead of in their chamber in the Illinois Capitol building a few blocks away because it affords more space for to practice social distancing amid the COVID-19 pandemic. (Ted Schurter/The State Journal-Register via AP, Pool via CNN)
by: Natalie Andes and Caroline Kelly, CNN
Posted: May 21, 2020 / 05:12 AM EST / Updated: May 21, 2020 / 05:12 AM EST

(CNN) — A state lawmaker in Illinois defended his refusal to wear a mask meant to stem the spread of coronavirus after his colleagues voted to oust him from Wednesday’s legislative session because of it, saying he is “representing the people.”

In a bipartisan vote, the Illinois House of Representatives voted 81 to 27 to remove Republican Rep. Darren Bailey for refusing to wear a mask during the special session, with one representative voting present. People in Illinois are currently required under an order from the governor to wear face coverings in public places where a six-foot distance isn’t possible.

The Illinois House voted to adopt rules on Wednesday that included a requirement for members, staff and visitors to wear a face covering over their nose and mouth during the special session. Bailey said he would not comply with the rules, and state Rep. Emanuel Chris Welch, a Democrat, made a motion to remove Bailey from the House floor.

“I feel like I’m doing the genuine thing of standing up and representing the people and saying enough is enough,” Bailey later told CNN affiliate WCIA.

“You just heard (Illinois Department of Public Health Director, Dr. Ngozi Ezike) tell you why people wear masks in the first place is to protect others,” Pritzker added. “So clearly the representative has no interest in protecting others.”

CNN has reached out to Bailey for additional comment.

Bailey, who represents the 109th District in Southern Illinois, has been a vocal opponent of Pritzker’s stay-at-home order to curb the spread of Covid-19, challenging the order in a lawsuit filed last month in Clay County Circuit Court.

A judge ruled that Bailey was personally exempt from the stay-at-home order, asserting that Bailey “has a clearly ascertainable right in need of immediate protection, namely his liberty interest to be free from Pritzker’s executive order of quarantine in his own home.”

Bailey’s stance on Wednesday comes as a new national poll from Quinnipiac University released the same day found that 64% of voters say everyone should be required to wear face masks in public, including 87% of Democrats, 60% of independents and 40% of Republicans. A similar share say President Donald Trump should wear a face mask when he is out in public — 67% overall, including 38% of Republicans.

Bailey isn’t the first or only Republican to go against health experts’ advice to wear a mask.

Trump has consistently opted not to wear a mask since the administration began recommending in April that Americans wear “non-medical cloth” face coverings — even after multiple White House staffers tested positive for coronavirus earlier this month.

Republican Rep. Ted Yoho of Florida was also spotted last week walking around the Capitol and on the House floor without wearing a mask.

Asked why not, he told CNN: “There’s just no need.”