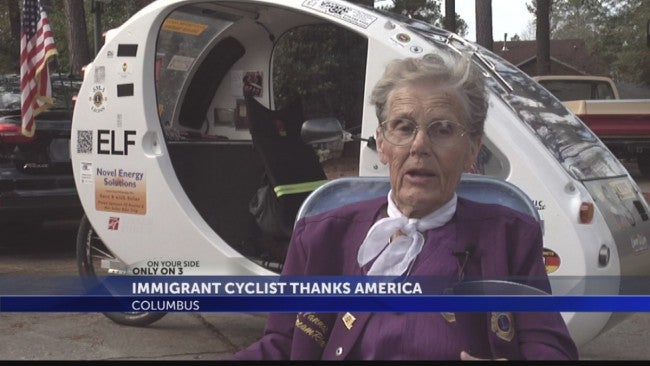 COLUMBUS, Ga. – We all express our gratitude in a variety of ways over the holidays. This week News 3 discovered a woman from Minnesota who is turning lots of heads with the vehicle she’s using to take her Thanksgiving message across the country.

Hanna Elshoff has been pedaling across America for almost seven months and her vehicle of choice gets a lot of double takes.

“It creates conversation, but the bike has made my journey what it is. And a lot of people say, ‘Oh, you are famous.’ I said, ‘No, no, the bike is.'”

Her bike, which is more like a trike, is primarily powered by Hanna’s legs. Though it does have a small motor she can engage to help her climb hills, but more powerful than Hanna’s legs is her message. She left her hometown in Minnesota on May 1 to pedal across the country to thank Americans. Hanna emigrated to the US from Germany in 1961 and says she owes her life to America for what we did in World War II.

“If they wouldn’t have come when they did, I wouldn’t be here. And that is what I’m thanking the American people for. Not only did they save my life, they sent packages, the Americans did a lot of things. They’re a very generous nation.”

Hanna says she’s run into a lot of kind-hearted folks on her journey.

Hanna is a member of the Lions Club back home. They’ve been a big help when it comes to lodging.

“I feel that the Lions and other service organizations that they hold the community together. And we have to keep promoting that and especially the young people. We have to get them involved in this type of service.”

Time and Angie Hollis belong to the Columbus Lions Club and opened their home to Hanna as she was passing through, but Hanna says it’s tough meeting new friends, only to have to tell them goodbye the next day.

“That’s the hardest part about this whole journey. I get emotional thinking about it, that I have to leave. But I have to leave. I have to keep going and making more connections with people and spreading the word more that you are good people, and there’s somebody who appreciates everything you have done.”

Hanna plans to continue her personal thank you tour of America until May of 2017.