Irma’s victims in the Caribbean brace for another hurricane 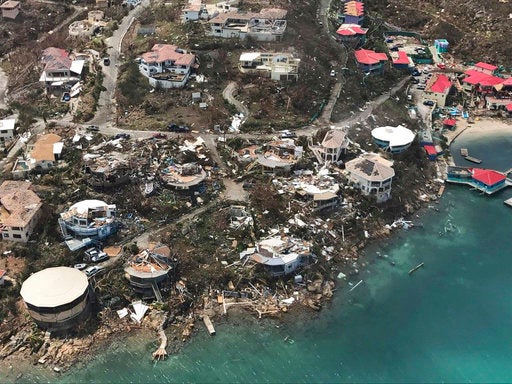 ST. JOHN’S, Antigua (AP) – Thousands of Irma victims across the Caribbean fought desperately to find shelter or escape their storm-blasted islands altogether Friday as another hurricane following close behind threatened to add to their misery.

Irma regained Category 5 status late Friday, and with its 160 mph (260 kph) winds battering Cuba and taking aim at the Miami metropolitan area of 6 million people, the death toll in the storm’s wake across the Caribbean climbed to 22.

Puerto Rico, the Dominican Republic and the eastern part of Cuba reported no major casualties or damage by mid-afternoon after Irma rolled north of the Caribbean’s biggest islands. Many residents and tourists farther east were left reeling after the storm ravaged some of the world’s most exclusive tropical playgrounds, known for their turquoise waters and lush green vegetation. Among them: St. Martin, St. Barts, St. Thomas, Barbuda and Anguilla.

On Friday, looting and gunshots were reported on St. Martin, and a curfew was imposed in the U.S. Virgin Islands.

Many of Irma’s victims fled their islands on ferries and fishing boats for fear of Hurricane Jose, a Category 4 storm with 150 mph winds that could punish some places all over again this weekend.

“I don’t think it takes a rocket scientist to know that further damage is imminent,” said Inspector Frankie Thomas of the Royal Police Force of Antigua and Barbuda.

On Barbuda, a coral island rising a mere 125 feet (38 meters) above sea level, authorities ordered an evacuation of all 1,400 people to neighboring Antigua, where Stevet Jeremiah was reunited with one son and made plans to bury another.

Jeremiah, who sells lobster and crab to tourists, was huddled in her wooden home on Barbuda early Wednesday with her partner and their 2- and 4-year-old boys as Irma ripped open their metal roof and sent the ocean surging into the house.

Her younger son, Carl Junior Francis, was swept away. Neighbors found his body after sunrise.

“Two years old. He just turned 2, the 17th, last month. Just turned 2,” she repeated. Her first task, she said, would be to organize his funeral. “That’s all I can do. There is nothing else I can do.”

Many victims picked through the rubble of what had once been Caribbean dream getaway homes.

On St. Thomas in the U.S. Virgin Islands, power lines and towers were toppled, a water and sewage treatment plant was heavily damaged, and the harbor was in ruins, along with hundreds of homes and dozens of businesses.

Opera singer Laura Strickling and her husband, Taylor, moved to St. Thomas three years ago from Washington so he could take a job as a lawyer. They rented a top-floor apartment with a stunning view of the turquoise water of Megan’s Bay, which is surrounded by low hills covered by trees.

Strickling huddled with her husband and their year-old daughter in a basement apartment along with another family as the storm raged for 12 hours.

“The noise was just deafening. It was so loud we thought the roof was gone. The windows were boarded up, so it was hot and we had no AC, no power,” she said. She said she and the three other adults “were terrified but keeping it together for the babies.”

Strickling, who used to visit her husband in Afghanistan when he worked there, added: “I’ve had to sit through a Taliban gunfight, and this was scarier.”