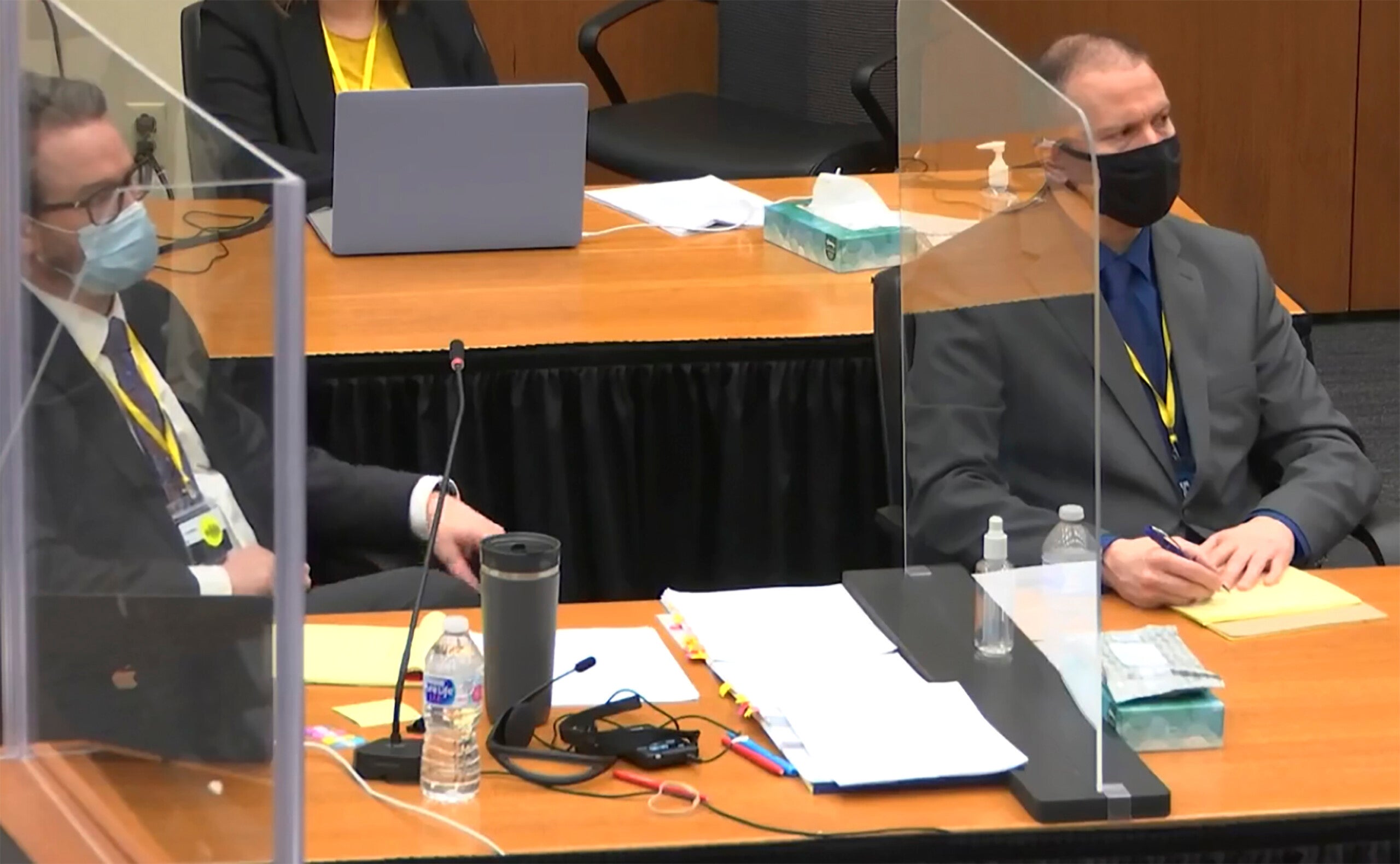 In this image taken from video, defense attorney Eric Nelson, left, and defendant former Minneapolis police officer Derek Chauvin listen as Hennepin County Judge Peter Cahill presides over jury selection, Wednesday, March 10, 2021, at the Hennepin County Courthouse in Minneapolis, Minn., in the trial of Chauvin, who is accused in the May 25, 2020, death of George Floyd. (Court TV/Pool via AP)
by: STEVE KARNOWSKI and AMY FORLITI Associated Press
Posted: Mar 11, 2021 / 09:37 AM EST / Updated: Mar 11, 2021 / 09:37 AM EST

Hennepin County Judge Peter Cahill added the charge after the former officer, Derek Chauvin, failed to get appellate courts to block it. Cahill had earlier rejected the charge as not warranted by the circumstances of Floyd’s death, but an appellate court ruling in an unrelated case established new grounds for it.

Potential jurors in Chauvin’s trial return Thursday to continue the selection process that started this week.

Floyd was declared dead on May 25 after Chauvin, who is white, pressed his knee against the Black man’s neck for about nine minutes. Floyd’s death sparked sometimes violent protests in Minneapolis and beyond, leading to a nationwide reckoning on race.

Five jurors have been seated after just two days of screening by attorneys and Judge Peter Cahill, who had set aside at least three weeks to fill the panel.

Cahill was expected to start Thursday’s proceeding by discussing next steps in the state’s effort to add a third-degree murder charge. Cahill rejected the charge twice before an appellate ruling in an unrelated case provided new grounds for it right before the trial began. On Wednesday, the state’s Supreme Court rejected Chauvin’s effort to block the charge.

Attorneys have given considerable attention to the jury pool’s attitudes toward police in the first two days of questioning, trying to determine whether they’re more inclined to believe testimony from law enforcement over evidence from other witnesses to the fatal confrontation.

The first juror picked Wednesday, a man who works in sales management and grew up in a mostly white part of central Minnesota, acknowledged saying on his written questionnaire that he had a “very favorable” opinion of the Black Lives Matter movement and a “somewhat unfavorable” impression of the Blue Lives Matter countermovement in favor of police, yet “somewhat agreed” that police don’t get the respect they deserve. He said he agrees that there are bad police officers.

“Are there good ones? Yes. So I don’t think it’s right to completely blame the entire organization,” he told the court under questioning from prosecutor Steve Schleicher.

He also said he would be more inclined to believe an officer over the word of another witness. But he said he could set aside any ideas about the inherent honesty of an officer and evaluate each witness on their own.

The second, a man who works in information technology security, marked “strongly agree” on a question about whether he believes police in his community make him feel safe. His community wasn’t specified — jurors are being drawn from all over Hennepin County, which includes Minneapolis and many of its suburbs.

“In my community, I think when there is suspicious activity the police will stop by, they will ask a question,” he said. “I think that sense of community is all we want right? We want to live in a community where we feel safe regardless of race, color and gender.”

Schleicher noted that the man also stated in his questionnaire that he strongly disagreed with the concept of “defunding” the police, which has become a political flashpoint locally and across the country in the wake of Floyd’s death.

“While I necessarily might not agree with the police action in some situation, I believe that in order for police to make my community safe they have to have the money,” he replied.

The questionnaire explores potential jurors’ familiarity with the case and their own contacts with police. Their answers have not been made public, and the jurors’ identities are being kept secret. Their r acial backgrounds often aren’t disclosed in open court.

Floyd was declared dead on May 25 after Chauvin, who is white, pressed his knee against the Black man’s neck for about nine minutes. Floyd’s death sparked sometimes violent protests in Minneapolis and beyond, leading to a nationwide reckoning on race.

Chauvin and three other officers were fired. The others face an August trial on aiding and abetting charges. The defense hasn’t said whether Chauvin will testify in his own defense.

Schleicher used a peremptory challenge Wednesday to remove from the panel a woman who has a nephew who’s a sheriff’s deputy in western Minnesota. She said she was dismayed by the violence that followed Floyd’s death.

“I personally didn’t see any usefulness to it,” she said. “I didn’t see anything accomplished by it, except I suppose bring attention to the frustrations of the people involved. But did I see anything useful coming out of the burning of Lake Street and that sort of thing? I did not.”

The state argued that the Noor affirmation established precedent for the third-degree murder charge under the circumstances of Floyd’s death. If the Minnesota Supreme Court had taken up Chauvin’s appeal, it might have meant months of delay in his trial. After their ruling, the Court of Appeals rejected as moot the state’s request to pause the trial pending the appeal.

Legal experts said adding the charge would give prosecutors an additional option as they seek to gain a conviction.